The Country House sale on September 12 includes an early 19th century ‘history painting’ by George Dawe (1781-1829). The scene from Cymbeline, Shakespeare’s convoluted tale of innocence and jealousy among the royalty of ancient Britain, is estimated at £15,000-20,000.

Paintings of classical and historical subjects such as this were the making of Dawe’s early reputation. A conscientious student at the Royal Academy, collecting Old Masters and attending lectures in anatomy had helped improve his knowledge of the human form. In 1815 he briefly employed a promising young artist named John Constable to paint some of his background work.

We know of two recorded paintings of Cymbeline. A picture by this name, alternatively titled Imogen found in the cave of Belarius, was awarded the top prize of 200 guineas at the British Institution for Promoting the Fine Arts in 1809. It is now in the collection at the Tate.

The 2.04 x 1.06m oil, from a private collection in the UK, is thought to date from the same period and may well be the Scene from Cymbeline for which the British Institution awarded a prize of £50. 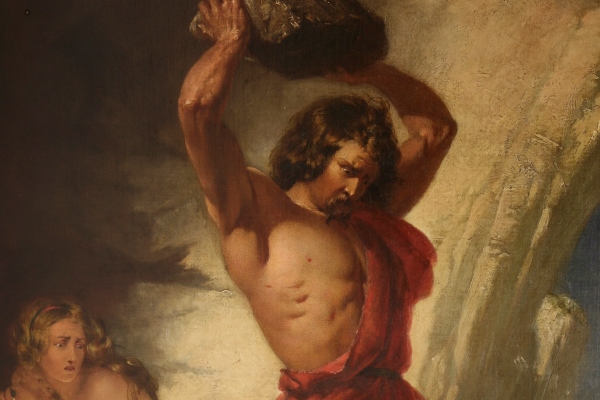 Ultimately, however, Dawe’s career would take an atypical path when, in 1819, he travelled with his patron the Duke of Kent painting full and half lengths of European bigwigs and military personnel. Brought to the attention of Alexander I, he moved to St Petersburg where he would paint, for the Winter Palace, the portraits of over 300 Russian generals who had successfully fought back the armies of Napoleon. Pushkin wrote a poem about the ‘First Portrait Painter of the Imperial Court’ titled To Dawe Esq.

If Dawe’s popularity did not endure in England, in Russia he is still held in high regard. Cymbeline is to be included in the forthcoming catalogue raisonne of the artist’s work by Galina Andreeva of the State Tretyakov Gallery in Moscow.