From the Norwich School of painters to the Great Bardfield artists and those who learned their trade at the East Anglian School of Paintings and Drawings in Benton End, East Anglia has a rich artistic heritage. Here, Sworders’ picture specialist Sarah Flynn delves into the department's archives to select nine pictures that were either made in the region - or by some of the region’s most famous artists.

From the Norwich School of painters to the Great Bardfield artists and those who learned their trade at the East Anglian School of Paintings and Drawings in Benton End, East Anglia has a rich artistic heritage. Here, Sworders’ picture specialist Sarah Flynn delves into the department's archives to select nine pictures that were either made in the region - or by some of the region’s most famous artists.

A Portrait of Christopher Griffith Jnr of Padworth, Berkshire

The great English portrait and landscape painter was born in Sudbury and worked in Suffolk before moving to Bath in 1759. This portrait was painted when Griffith was visiting Bath and Gainsborough's studio had become one of the sights of the city. It is a direct image, uncomplicated and honest, but demonstrates the artist's ability to catch a likeness and paint lace to perfection. 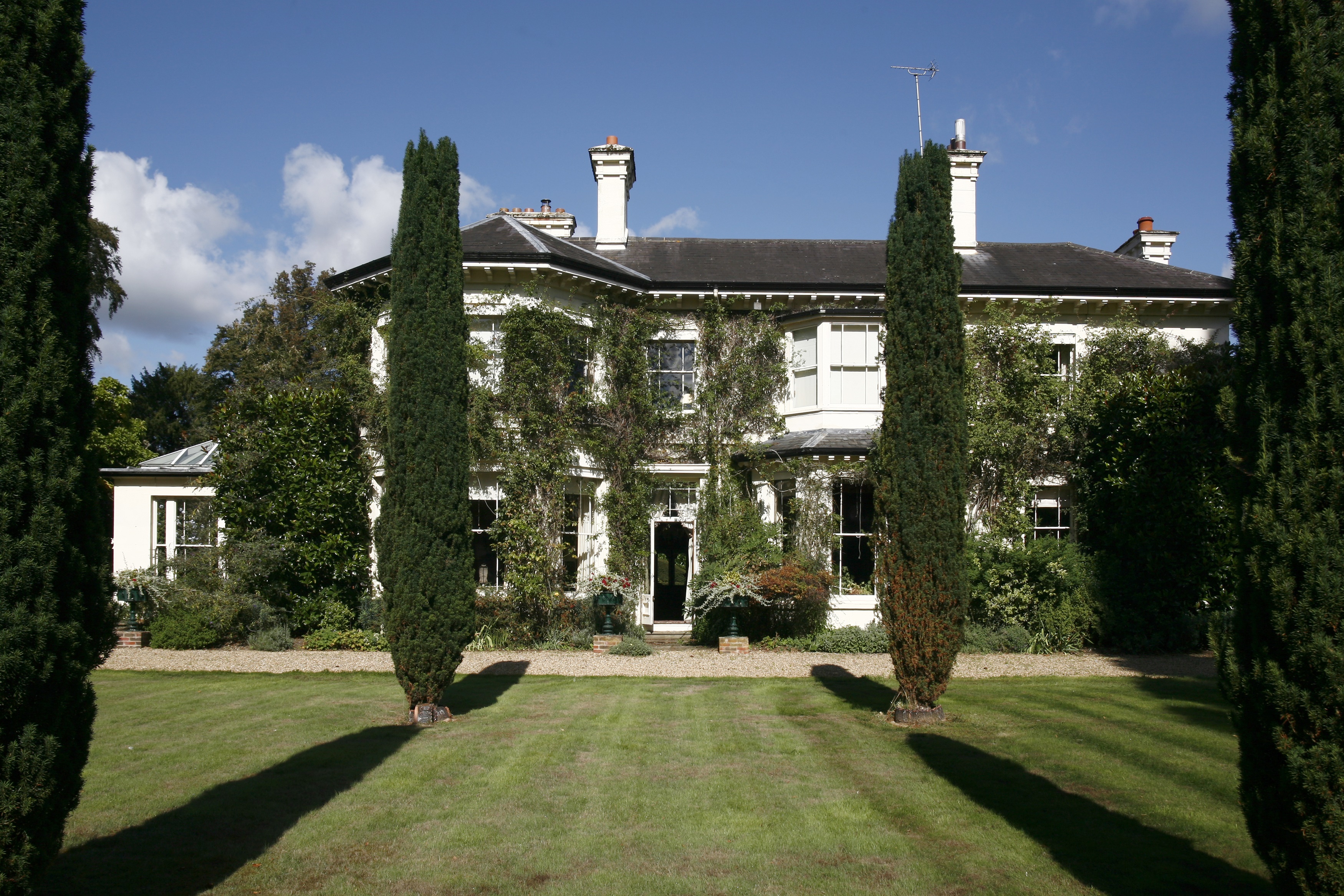 Eric Ravilious moved to Hedingham in 1935 and painted this scene of working mills in the months after his arrival in the village. He was tragically killed in the Second World War, lost in action when his plane went down off the coast of Iceland in September 1942, so his work is scarce. The painting is an important example of Ravilious’s work and it is wonderful that the Fry Art Gallery in Saffron Walden was able to acquire it with assistance from the Art Fund and the Victoria & Albert Museum. 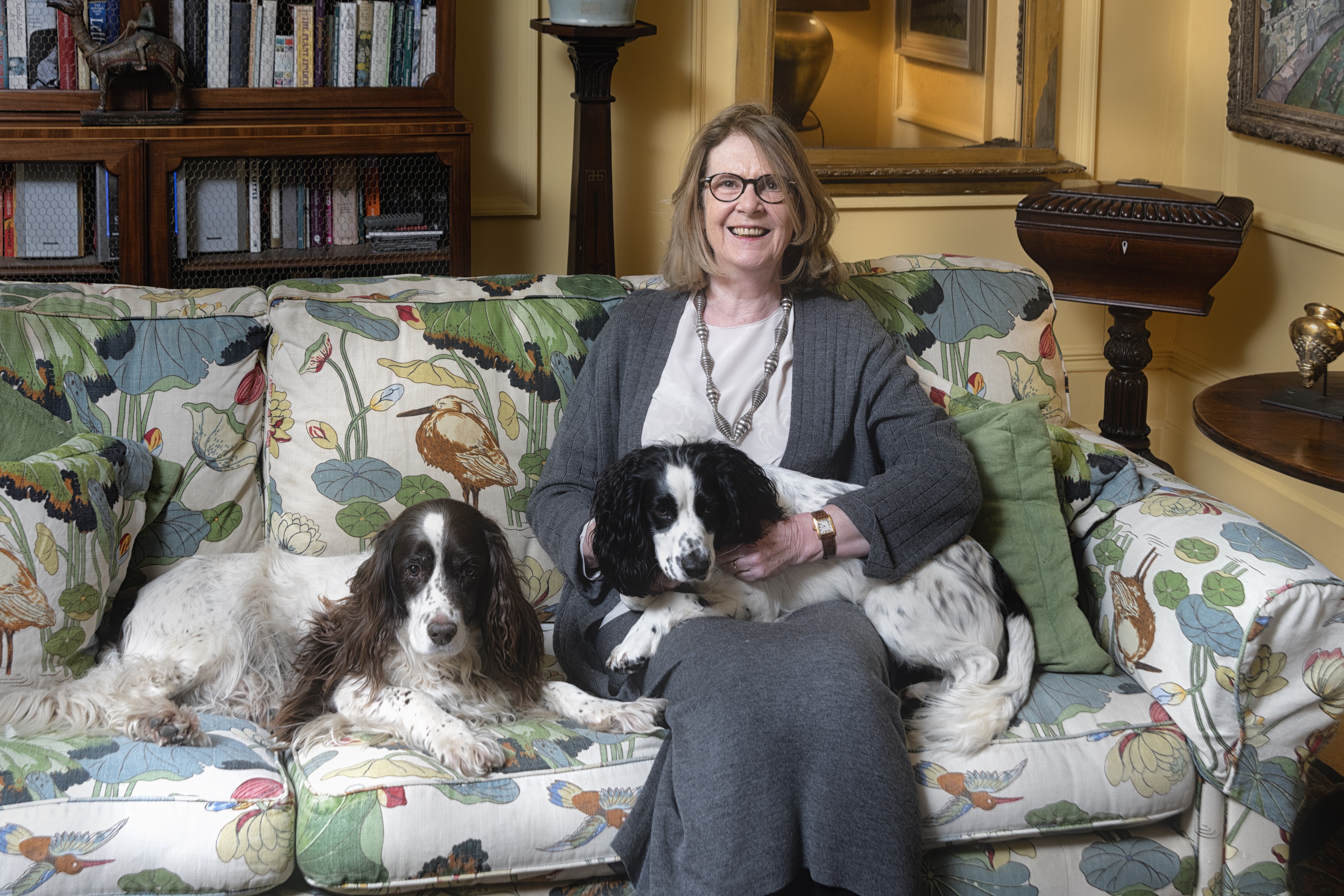 This rediscovered painting by the artist-plantsman Cedric Morris sold for a world record price at the time.

Foxglove is surely the quintessential Morris still life depicting blooms of pink and purple foxgloves and other English garden flowers. A real treat for the senses.

It was painted in 1932, just three years after Morris and lifelong partner Arthur Lett-Haines chose the country life over a London studio. The couple took the lease on their first Suffolk home (Pound Farm in Hingham) in 1929, followed in 1937 by the founding of the avant-garde East Anglian School of Painting and Drawing, first in Dedham and then at Benton End House. The heyday of Benton End was the two decades from 1940 when the art school was at its most active and the three acres of garden at their spectacular best. Morris was unique as both a painter and horticulturalist of equal stature: while painting and teaching he cultivated more than 90 new named varieties of iris (many carrying the prefix Benton).

The vendor of the painting says her father and grandfather both knew the artist - the friendship kindled when members of her family were evacuated to Morris’ native south Wales during the Second World War. Her father occasionally stayed at Benton End and the picture has been in the family since at least the early 1960s.

Like most artists from the 20th-century British avant-garde, Cedric Morris (1889-1982) has had his fashionable ups and downs but he is currently riding the crest of a wave. The subject of several recent exhibitions, prices in the auction room have been strong.

Recently Benton End itself, a rambling £1.3m 'Suffolk pink' farmhouse on the outskirts of Haleigh, was acquired by a trust with a mission to return the Grade II* property to a place of artistic and horticultural education. Part of the proceeds of the sale of this picture went to the Benton End House and Garden Trust.

A Suffolk spring landscape with welsh mountains beyond 1939/40 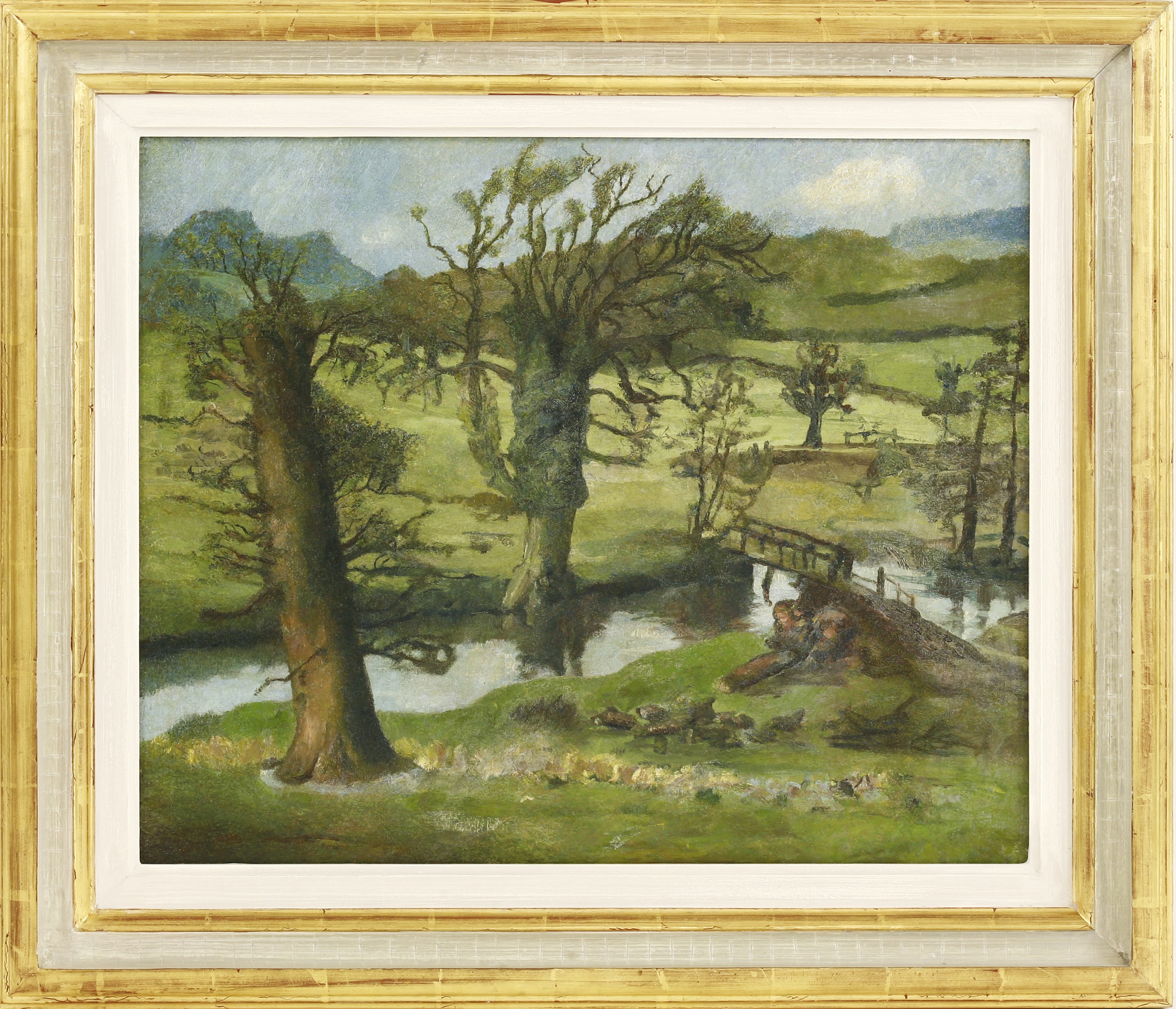 This picture was a real find – it came from the estate of Tom Wright, a Suffolk artist who studied at Benton End in Hadleigh under Cedric Morris. The canvas was covered with a painting by Tom Wright, yet curiously had ‘Lucian’ scrawled in large letters on the reverse. The agent handling the estate, knowing that Lucian Freud had been a contemporary of Tom Wright at the East Anglian School of Art, and knowing how impoverished artists re-used canvasses, took a chance that there might be another painting underneath Wright’s picture. With a bit of detective work and some tests by a conservator, there did indeed seem to be another image underneath. The decision was made to remove the top layer of paint and low and behold a possible Lucian Freud landscape was revealed. Dated to around 1939/40, experts concluded that it was probably an imagined amalgam of a Suffolk landscape, where he was studying with some Welsh hills beyond – he had also spent time painting in Wales through this period.

A lady on a bay hunter jumping a hedge 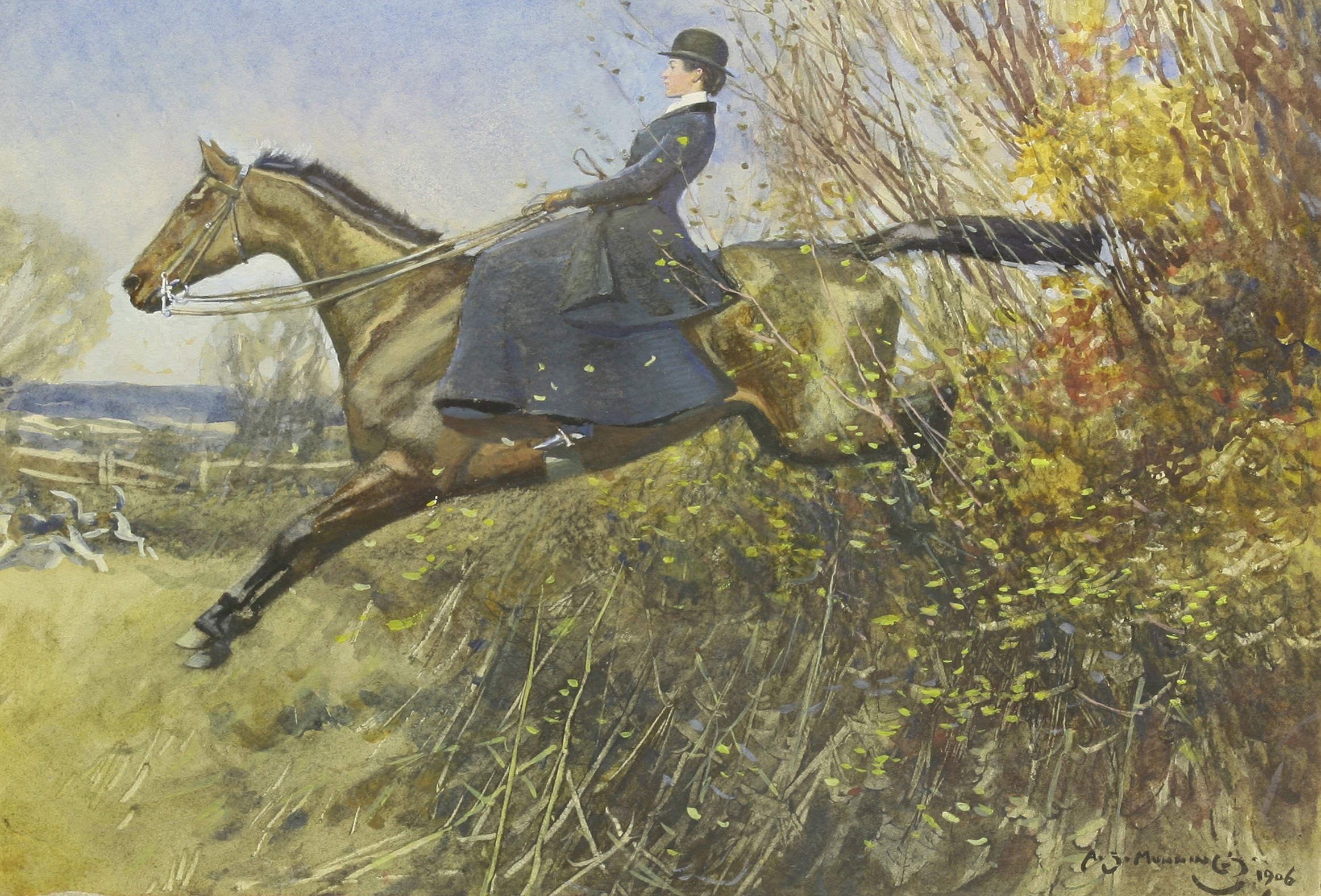 Munnings was born at Mendham Mill, across the River Waveney from Harleston. His father was the miller and Alfred grew up surrounded by horses. This Edwardian watercolour (signed and date 1906) is very much of its period. The rider is shown riding side-saddle and jumping a hedge, leaning backwards - probably the most dangerous things a horsewoman can do. Munnings expert knowledge of the horse is clear in every work he painted. We forget too that he only had the use of one eye, having lost the sight of one eye in a bramble bush in his youth.

Portrait of the Sea

Sudbury-born Maggi Hambling, a student of Cedric Morris at the East Anglian School of Painting and Drawing from 1960, loves the sea in all its wild changes. Perhaps her best-known work is Scallop (2003), the memorial to Benjamin Britten that stands on the beach outside Aldeburgh.

The Fitzwilliam Museum had an exhibition of her Wave paintings a few years ago. In these paintings, she captures perfectly the moment of the sea as the wave crashes on the land and this can be felt by the viewer. Her work is much collected as underlined by the price fetched by this tiny oil from 2006.

This very beautiful early Cotman oil attracted great interest in the saleroom Works of this quality by Cotman come up rarely nowadays and its lovely provenance and exhibition history helped it to achieve a price of £14,200, hotly contested on several telephones. The painting was part of a group of Norwich School pictures from the family of Surgeon Vice Admiral Godfrey Milton-Thompson. It had been exhibited many times in the 1950s when it was owned by Gavin Astor and hung at Hever Castle.

The Norwich Society of Artists, founded in 1803 as a club where artists could meet to exchange ideas, is the first provincial art movement in Britain. 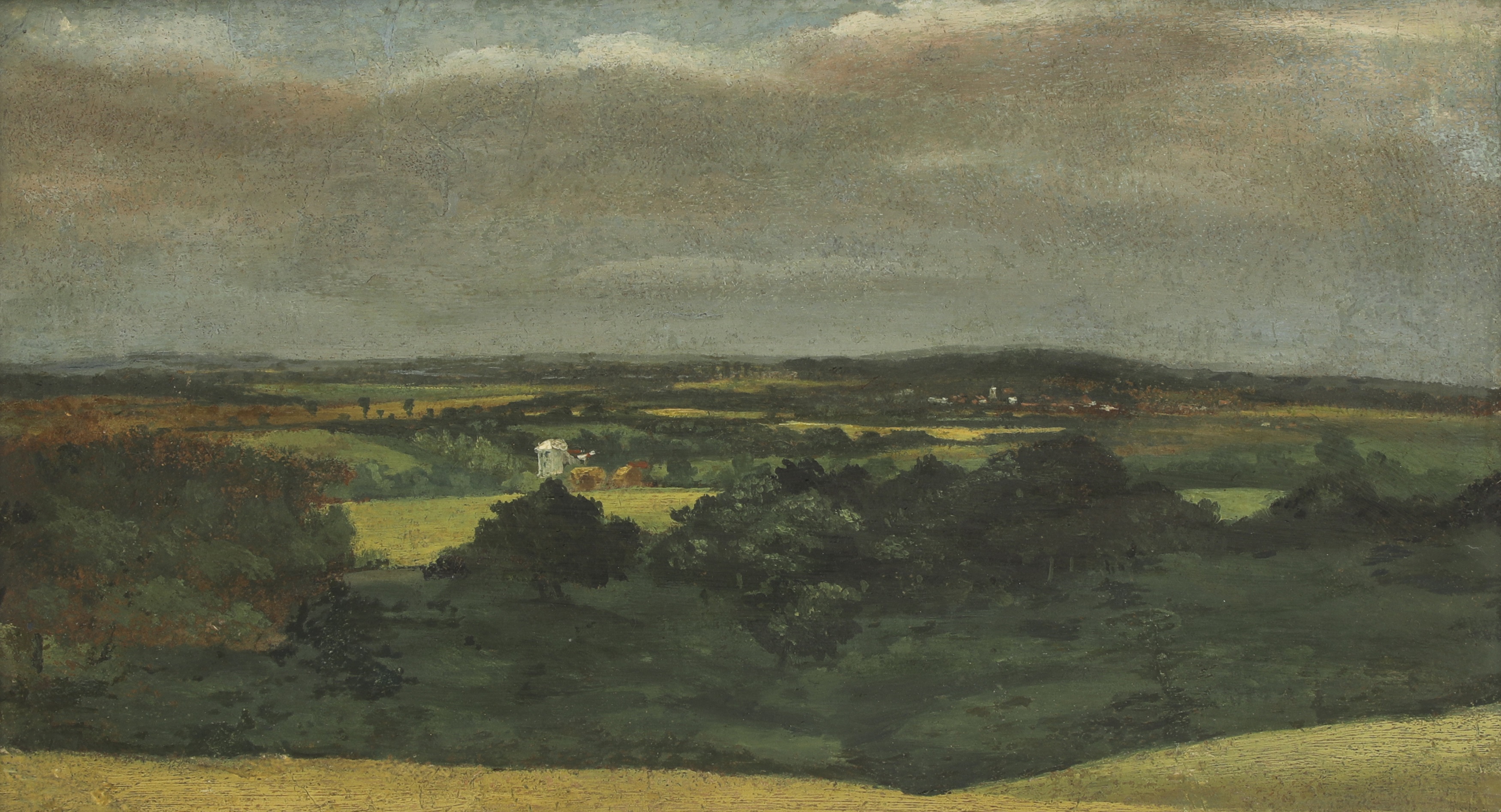 During the first half of his career, when visiting the family home at East Bergholt during the summer, Constable would tend to focus on two key landscape subjects: panoramic views overlooking the Stour valley or more enclosed views made in and around the mill at Flatford belonging to his father, Golding Constable.

This very personal oil sketch from c.1809 shows the countryside he knew so well – with one of his father’s mills in the far distance. One can imagine Constable going off with his millboards in his rucksack, a flask of beer, a pork pie and sandwiches, going off for a day’s sketching, very early in his career.

The fact that the picture once passed through the hands of Leggatt Brothers points towards a likely provenance direct from a member of the Constable family.

'THE JAMES' AND 'THE FOREMOST PRINCE' 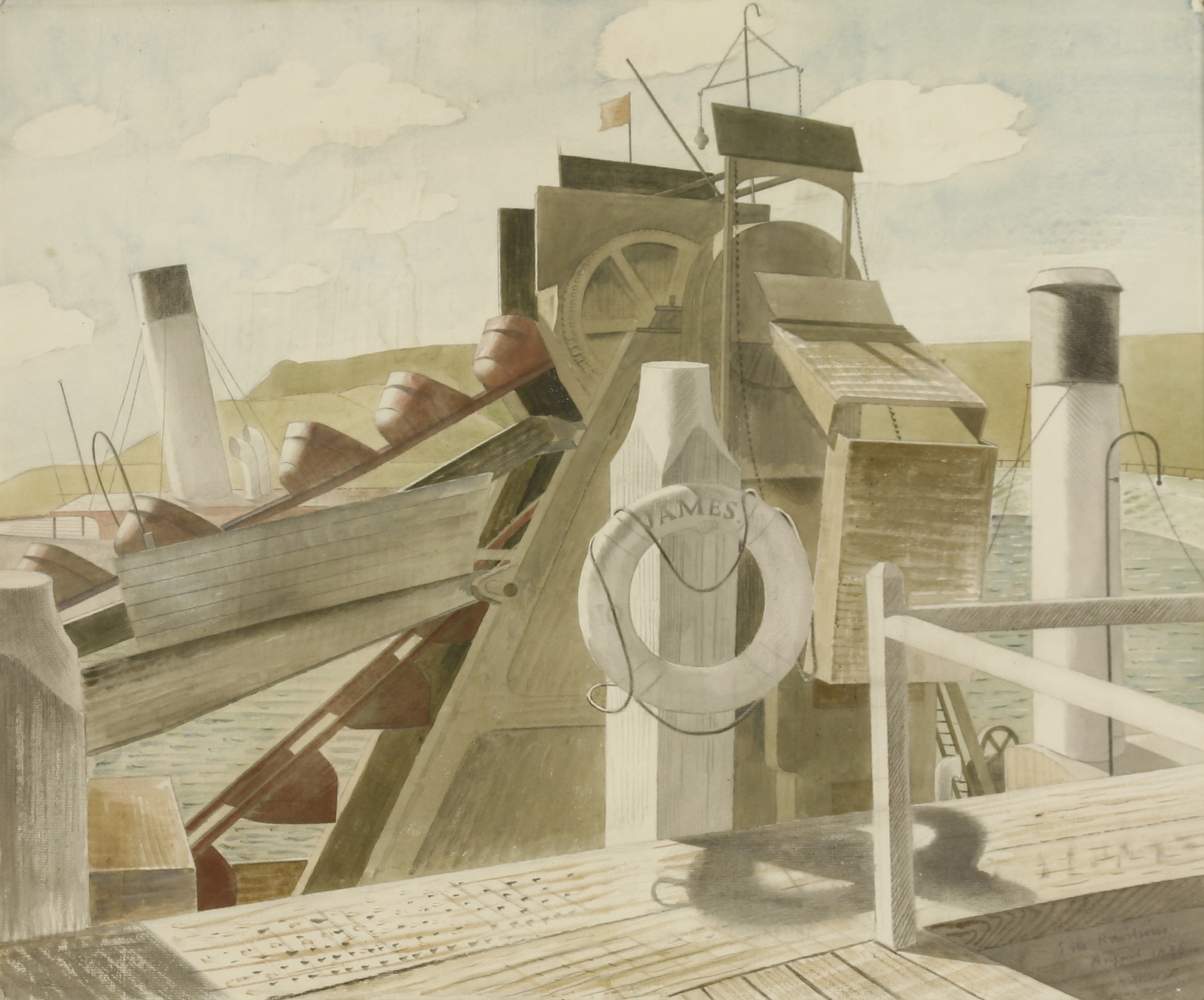 Original works by Ravilious don’t come up very often on the market as he died at the age of 39. This particular piece was a real find – the vendors didn’t know it had any value at all when they brought it in to show us and were delighted with the final price achieved. The painting benefitted from very good provenance and had been exhibited at the Imperial War Museum, indicating its importance within his oeuvre.

Sworders enjoy a strong track record selling the work of a plethora of local artists and artisans and are hopeful of meeting members of the public with similar pieces for valuation or sale.

We are currently accepting entries for our April Modern British Art auction and would like to hear from you should you be considering selling.

* All prices shown do not include Buyers Premium

A Magic Surprise at Sworders

A collapsible silk top hat - perfect for a Victorian night at the opera, or a 20th century magic trick - comes for sale on July 20.