On Tuesday 17 and Wednesday 18 May we will sell a remarkable collection of marionettes, theatre props and staging made by John Carr (1884-1971). Some of the puppets were used in the early days of British television, appearing in twenty-one live BBC broadcasts during the late 1930s.

John Carr and his cast of characters performed as The Jacquard Puppet Company between 1933 and 1970. The company was one of only a few to use small marionettes (each measuring between 12 and 14 inches tall) - something that was very much in its favour in the early days of television.

Carr was given the chance to perform in front of the camera in 1937 – less than a decade after the first-ever experimental BBC television broadcast (30 September 1929) and just months after the BBC Television Service officially launched from a converted wing of Alexandra Palace in London (2 November 1936). 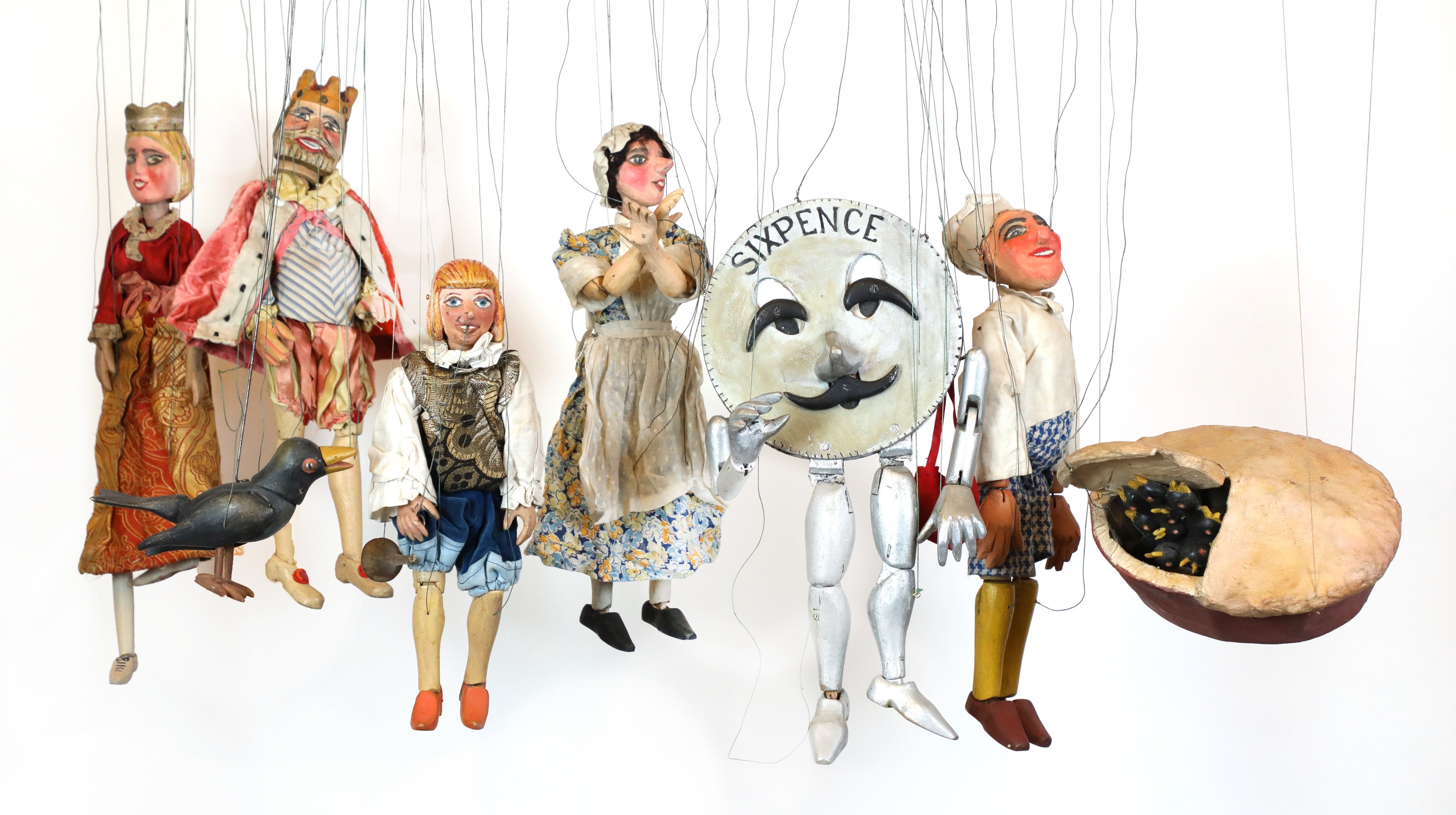 Meeting an enthusiastic reception, he gained the support of the influential BBC TV pioneer Cecil Madden and was encouraged to develop new and more complex acts. A talented woodcarver and lifelong member of the British Puppet and Model Theatre Guild, Carr made his own puppets with the costumes provided by his wife Eva.

John and Eva Carr at work in their studio

In its prime the company (aided by the couple’s four children) used around 100 different marionettes – characters with titles such as Barnacle Bill the Sailor, The Walrus and the Carpenter, Barney the Bashful Bullfrog and William the Yokel.

Many referenced characters that were popular on stage and screen.

Following a request by television producer Cecil Madden, The Crooner came into being in April 1937 (the puppet assumed the image of American singer Rudy Vallee), while a puppet of Paul Robeson that ‘performed’ to a recording of the Show Boat classic ‘OI Man River’ made his first appearance in May 1937, at a dinner party for the Coronation. An act involving pugilists and a referee was developed in 1939 following the BBC broadcast of a boxing bout between England and Ireland – the first-ever television sports event with live commentary. However, with the advent of the Second World War, the government became concerned that VHF transmissions from London could act as a beacon to enemy aircraft and television was shut down. 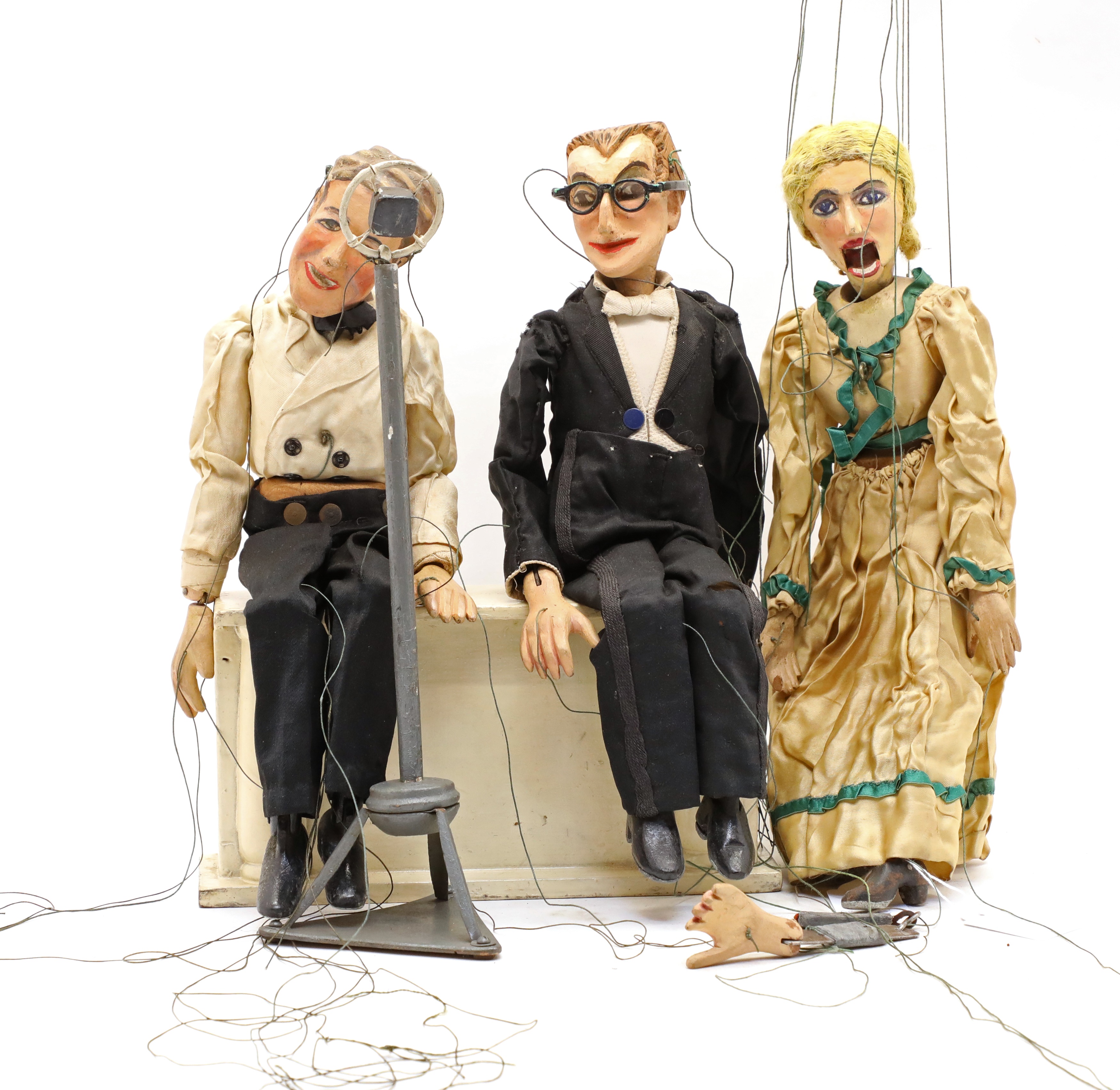 The collection, to be sold on 17-18 May as part of our Design auction, comes for sale from John Carr’s grandson.  It will be offered in around thirty lots in total with estimates ranging from £200-600.

Most lots comprise the puppets from specific Jacquard acts including those for The Circus (clowns, acrobats, animals and a ringmaster) guided at £400-600 and the various characters (King, Queen, blackbirds, pie etc.) used in a popular act on the theme of the nursery rhyme ‘Sing a Song of Sixpence’ estimated at £300-400. The latter is specifically mentioned in the programme produced by the British Puppet and Model Theatre Guild for the 1951 Festival of Britain.

Relatively little original footage of Carr’s talent as a puppeteer survives. However, one exception is The Jacquard Trio, comprising a performing pianist, a violinist and a lady cellist. These elements are offered together estimated at £200-300.

The forthcoming Design auction will be conducted live from our Stansted Mountfitchet Auction Rooms over two days on Tuesday 17 and Wednesday 18 May. For more information about the sale, please contact -