Jewellery from the Swinging Sixties and 1970’s - once relegated to the bottom of the jewellery box or worse, the melting pot, is now back in vogue. The commercial stock of a range of pioneering British goldsmiths from the post-War era has risen substantially since the turn of the 21st century. And the coolest of cool Britannia is Andrew Grima (1921-2007).

Italian emigre Grima opened on staid Jermyn Street in 1966, his landmark shop with a facade of layered slate and steel slabs, a huge aluminium door that opened automatically, and a Perspex spiral staircase. Designed by his brothers Godfrey and George, both architects, and opened by Lord Snowdon, then married to Princess Margaret, it looked, wrote one critic, ‘like a lair for a villain in an early Bond movie’.

The jewels inside were just as cutting edge. Grima and his contemporaries such as John Donald, Alan Gard, Gerda Flöckinger, and Charles de Temple revolutionised the jewellery world in the 1950s and 60s. Together they embraced the organic and crystalline qualities of uncut semi-precious minerals and adopted an experimental approach to goldsmithing. Grima, who championed the use of textured gold and unconventional stones such as aquamarines, citrines, tourmalines, and rough amethysts, once cast a brooch from pencil shavings.

At the peak of his fame in the 1970s, when he held a royal warrant as jeweller by appointment to the Queen, Grima had galleries in Zurich, Hong Kong. New York, Tokyo, and Sydney.

The Grima pendant sold at auction by Sworders on July 5 2016 was acquired by the vendors in 1979 directly from Andrew Grima in Hong Kong. Made c.1970 it comprises a carved rectangular lapis lazuli pendant of a pheasant and dragon to a comma-shaped diamond set bale. Suspended on a bark textured bar link chain and in its original case, it sold for £2,300.

The same consignor had earlier visited Grima in Jermyn Street in 1970 where they bought the ‘Pinkerton’ bracelet watch from the About Time collection.

This scarce piece, hallmarked London 1969 with a movement by Omega, includes many ‘signature’ elements of the Grima style including a tourmaline lens highlighted by baguette cut diamonds and an 18 carat gold brick bracelet with a bark finish. An archival photo c.1969 survives of Grima, pipe in mouth at his home in Sonning-on-Thames, designing watches for the collection that ultimately consisted of 55 timepieces and 30 matching pieces of jewellery. Sold in its original case in near pristine condition, this example made £19,500 at auction. 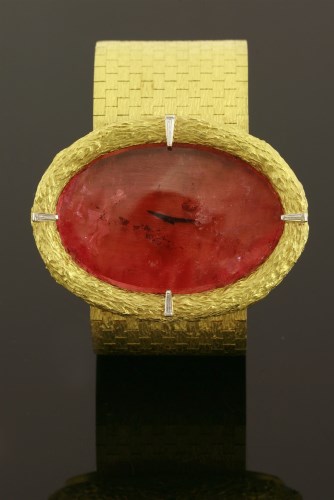 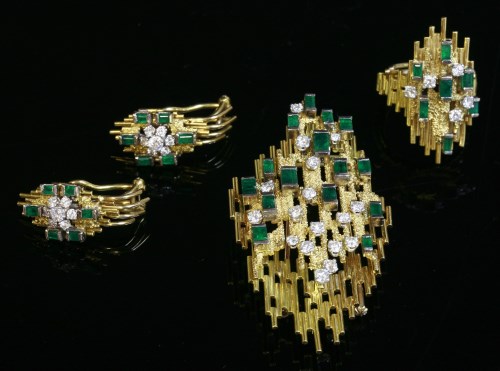 An emerald and diamond brooch/pendant
Sold for £1,500