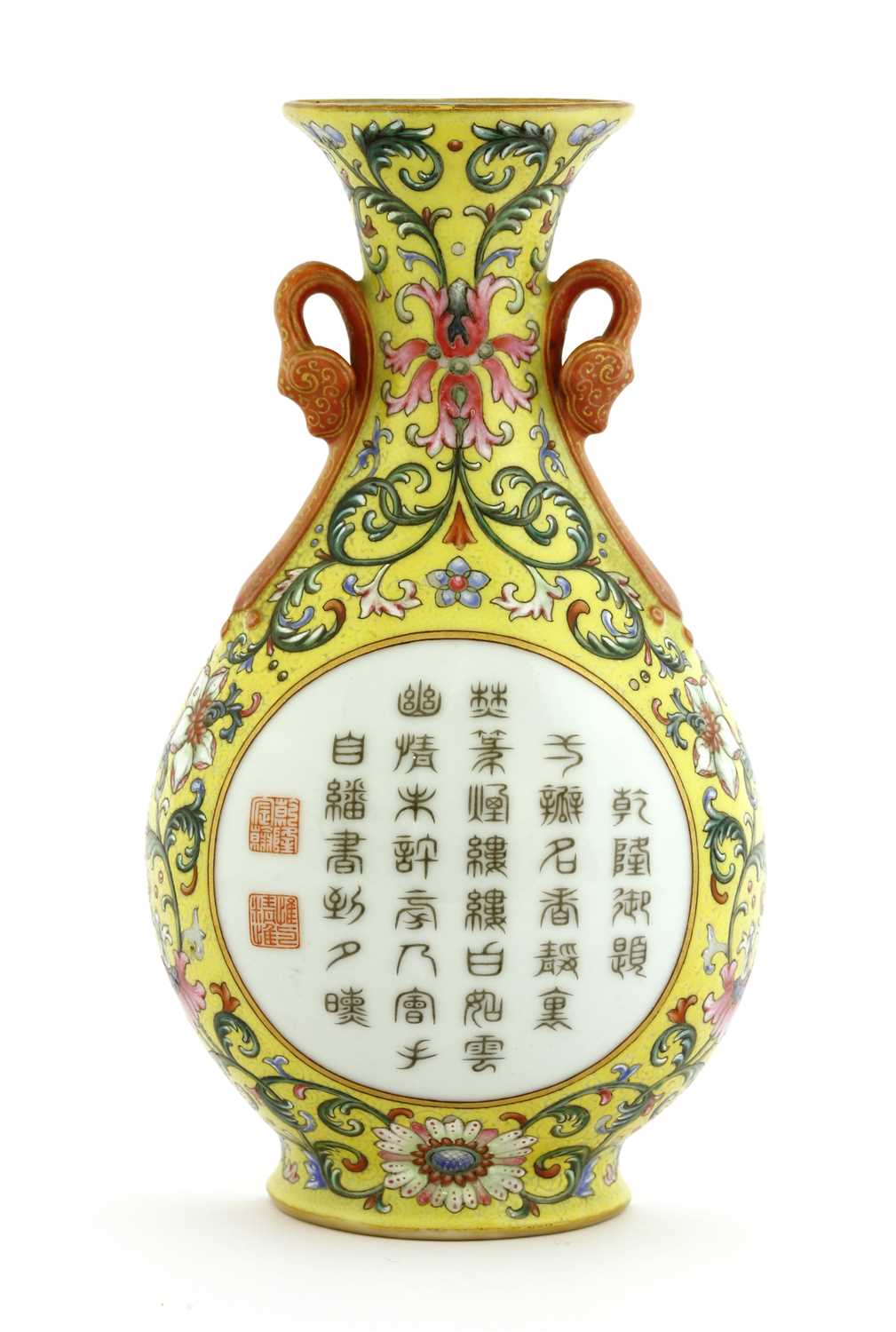 A Chinese imperial inscribed famille rose wall vase,
Qianlong (1736-1795), well modelled and flattened at the back, the pear-shaped form on a short splayed foot, flanked by a pair of ruyi handles to the waisted neck, the body inscribed with an imperial poem appraising incense in a circular cartouche with a yuti mark followed by two iron-red seal marks reading Qianlong chen han (the Qianlong Emperor's own mark) and Weijing weiyi (be precise, be undivided), surrounded by scrolling lotus against a yellow sgraffito ground,
19cm high

The poem is recorded in the Yuzhi leshantang quanji dingben [Definitive Edition of the Complete Works by His Majesty from the Hall of Pleasure in Goodness], Siku quanshu [The complete library in four sections] ed., vol. 30.

Wall vases, also known as wall pockets or sedan chair vases, can be traced back to the Wanli period (1573–1620) in the Ming dynasty, when examples can be found for flower displays on the wall. During the 18th century under the reign of the Qianlong Emperor (1735-1796), government support for arts and craftsmanship reached its peak, the quality of the refined material and the artistic innovation all representative of the emperor’s ambition. Wall vases, of all porcelain forms, became one of Qianlong’s favourite types and developed significantly during his reign. There are thirteen wall vases in varying glazes and forms on the wall of San Xi Tang (The Hall of Three Rarities), the emperor’s special study in Yang Xin Dian (Hall of Mental Cultivation) in the Forbidden City, where he housed his most prized possession: the calligraphic works comprising ‘Timely Clearing After Snowfall’ by Wang Xizhi, ‘Mid-Autumn’ by Wang Xianzhi and ‘Boyuan’ by Wang Xun (fig.1).

There are 320 Qianlong wall vases recorded in the collection of the Palace Museum in Beijing and about 138 of them are inscribed with poems by the emperor. Only a few of these poems are from Yuzhi Leshan Tang quanji [The complete Works by His Majesty from the Hall of Pleasure in Goodness], which were written by him as Heshuo Bao Qinwang (Prince Bao of the First Rank), his title from 1722 to his accession in 1735, and which were first printed in 1737 (fig.2). According to Zaoban Chu Gezuo Chengzuo Huoji Qingdang [The Archives of the Imperial Workshops], on the 23rd of September in the 7th year of the Qianlong period (1742), the emperor specifically commissioned Tang Ying (1682-1756) to produce porcelains with selected poems from Leshan Tang quanji. And on the 16th of October in the 17th year (1752), the emperor instructed Tang Ying that instead of the poems from the Leshan Tang quanji, which were written when he was still a prince, only poems composed after his accession in 1735 should be used (see Chi Jo-hsin, 'cong wenwu kan Qianlong huangdi [understanding Qianlong Emperor through artifacts]', Emperor Ch’ien-lung’s Grand Cultural Enterprise, National Palace Museum, Taipei, 2002, p. 233). In view of this the present wall vase must have been produced between 1742 and 1752, as part of a larger order which included the pair of vases in the collection of the Palace Museum: all three are identical but for their differing poems; see Poem and Porcelain: The Yu Zhi Shi Ceramics in the Palace Museum, Beijing, 2016, pl. 46 (fig.3).

Enhancing the rarity of the present lot, is its yangcai (foreign colours) decoration, which was introduced by European Jesuit craftsmen to the Qing court around 1685, adapting the European techniques of enamelling on metal. This resulted not only in an enriched palette of colours, but also in a combination of European brocade-like designs, using tonal effects to appear three-dimensional, and purely Chinese elements such as scrolling lotus motifs. Developed in the Jingdezhen imperial workshops under the patronage of the Qianlong Emperor, this style is representative of the superb quality of porcelain production achieved during the Qianlong reign. Special orders of yangcai are believed to date from only a few years in the early 1740s, with none after Tang Ying’s death in 1756. For more examples of yangcai enamels on sgraffito grounds, see Huali cai ci: Qianlong yangcai/Stunning Decorative Porcelains from the Ch’ien-lung Reign, National Palace Museum, Taipei, 2008.

NO ONLINE BIDDING ON THIS LOT. PLEASE CONTACT US TO ARRANGE TELEPHONE BIDDING.


Enamel losses and flakes in numerous places, gilt rubbed, a small chip to one handle.

As you cannot attend the auction in person we can bid on your behalf. You can leave an absentee bid on our website.

AUCTION TO BE HELD AT THE  MOUNT VERNON ROOM, THE WESTBURY, MAYFAIR W1S 2YF