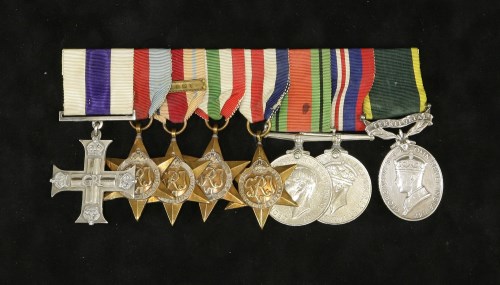 An important World War Two Arnhem Military Cross group of seven,
awarded to Captain Francis Kinglake Hoyer-Millar, B Company, Second Parachute Battalion, Parachute Regiment,
comprising:
The Military Cross, inscribed 1945,
The 1939-1945 Star,
The to enemy fire, and so organised his defences that the enemy attack was repulsed. Later the whole of his position was set on fire but he continued to hold the area until ordered to withdraw. He then successfully evacuated the remnants of his company, himself remaining to the last.

The 1st Allied Airborne Corps, which included the American 82nd and 101st Airborne Divisions, was tasked to secure the main canal and river crossings between Eindhoven and Arnhem. The aim was to provide an ‘airborne carpet’ along which the ground forces spearheaded by 30 Corps would break into the Ruhr and end the war.

The 1st British Airborne Division, which included the 1st, 2nd, 3rd, 10th, 11th and 156th battalions of the Parachute Regiment under the command of Major General R E Urquhart was dropped near Arnhem to seize the road bridge over the Neder Rijn.

Due to insufficient aircraft to fly the division complete, the Air-Landing Brigade had to be used to protect the drop zones and landing zones for the second lift, leaving only the three battalions of the 1st Parachute Brigade to secure the bridge.

Despite the initial surprise, the lightly equipped parachutists were soon encountering unexpectedly heavy German resistance, because elements of the II SS Panzer Corps happened to be refitting in and around the Arnhem area. Only the 2nd Parachute Battalion commanded by Lt Col J D Frost and elements of the Royal Engineers squadron and Recce Company reached the bridge and secured the northern end. They were soon cut off.

Though under constant attack by armour and infantry, the Arnhem bridge was held for three days and four nights. The division task had been to hold for 48 hours until relieved by ground forces.

Meanwhile, the rest of the division, depleted by its attempts to fight through to reinforce at the bridge, were compressed into a small perimeter across the river at Oosterbeek. They held on against overwhelming odds for nine days until ordered to withdraw across the river during the night of 25/26 September.

Of the 10,095 all ranks that landed, fewer than 3,000 got out across the river. The ground forces failed to link up and the bid to end Africa Star,
The Italy Star,
The France and Germany Star,
The Defence Medal,
The War Medal,
together with a George VI Territorial Medal, awarded to 2929348 SJT D J BRUCE, Liverpool Scottish (Territorial),
together with a caricature of the war in 1944 failed.

Captain Hoyer-Millar was second-in-command of B Company, and was seen as one of the old hands. He had fought in North Africa and Italy, and had been the battalion's Intelligence Officer.

He was awarded the Military Cross for his deeds at Arnhem Bridge. His citation in the London Gazette on 18 September 1945 reads:

'Captain Hoyer-Millar with two sections of B Company was ordered to hold a vital position astride the north end of the bridge at Arnhem, soon after dark on D+1. As he moved into the position he was met by entirely unexpected automatic fire from a much stronger enemy force who had infiltrated under cover of dark. Without the slightest hesitation Captain Hoyer-Millar went straight into the attack and by the speed and ferocity of his assault killed ten and drove off the remainder. Later in the night he drove off a strong enemy counter attack from the south.

On the morning of the fourth day Captain Hoyer-Millar took over command of B Company, when the Company Commander was wounded, at a very critical stage of the battle when his Company was being attacked and half his position had been set on fire. He displayed great courage continuously exposing himself

As you cannot attend the auction in person we can bid on your behalf. You can leave an absentee bid on our website.