Sir George Clausen grew up in London where he was exposed to the arts from  by his artist and sculptor parents. He studied at the National Art School in South Kensington and progressed to work in the studio of Edwin Long RA.  During his time as a student he visited Belgium and Holland and developed a love for the Dutch Masters.

He was particularly influenced by the works of Jules Bastien-Lepage which he encountered whilst studying at the Académie Julian in Paris. Lepage focused on absolute naturalism portraying  an honest representation of rural working life,  working en plein air. Clausen was inspired and left the Royal Academy on his return to England. He became a founding member of the New English Art Club and he shifted his focus to the outdoors and rural labourers. Clausen embraced the countryside and moved to Widdington in 1891, close to Saffron Walden. The open landscape of East Anglia suited his growing obsession with colour, light and wide landscapes; an interest ignited from the study of Degas' pastels.

Clausen maintained his links with London becoming  professor and later director at the Royal Academy Schools. He was knighted in 1927. He left Essex in 1905, but returned in 1917 and settled in Duton Hill, near Great Dunmow where he focused all the more on rural scenes. He continually experimented with technique and medium, ranging from oil paint applied in thick layers, to light watercolour applied in a single wash. 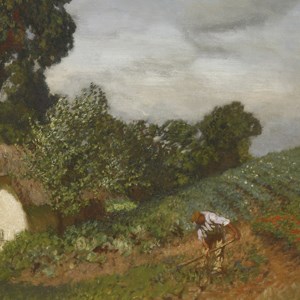