A Historical Diamond at Auction: The Wittelsbach-Graff

The House of Graff

Graff Diamonds is a British multinational jeweller based in London founded in 1960 by English billionaire, Laurence Graff.

Born in 1938 to a Jewish family in the East End of London, his Russian father, Harry Graff, and Romanian mother, Rebecca Segal, lived a modest but hard-working life bringing up their son in the 1940s. At the age of 15, Graff was employed as a jeweller’s apprentice in the famed streets of Hatton Garden in London. Three months in to the job, Graff was told by his employer that ’he would never make the grade’.

Undeterred by this criticism, Graff ferociously pursued his dream and by the time he was 22 he owned his own business repairing Victorian jewellery. The successful sale of his very first design encouraged him further and in 1960, Graff Diamonds was born.

Graff had a charisma that helped him form valuable relationships with the world’s rich and famous and, with his strong eye for gemstones, he soon became a household name amongst royalty and celebrities, flying around the world to show his stones to Arabian sheikhs, kings and queens, and becoming best friends with the actress, Elizabeth Taylor, whose passion for jewellery equalled Graff’s.

In order to supply his clients with the best diamonds, Graff knew he needed to be involved in the supply chain. With a successful company behind him, he purchased a share in the South African Diamond Corporation which had access to DeBeers rough diamonds. He then revolutionised the mine-to-market process by consolidating each division at his ‘Technology Park’ in Botswana.

With tremendous pace and success the House of Graff evolved. Today there are more than fifty stores worldwide.

The World of Diamonds

The diamond is considered one of the most celebrated gemstones in the world. Its beauty and worth are renowned and the qualities that bring about this fame have been studied and researched for centuries.

Ultimately, diamonds are assessed according to four factors, famously known as the four C’s: Carat, Colour, Clarity and Cut. Diamonds are priced in carats. However, it is important to note that price and size are not a direct correlation and certain sizes are more desirable. Colour is laid out on a scale from D (colourless) to Z (distinctly yellow but not quite Fancy yellow). Fancy colours are also found in diamonds such as Fancy blue, brown-orange, pink and red. Clarity refers to the absence of inclusions within a diamond. This is graded from Flawless (Fl) right the way though to Imperfect (I). Clarity is graded with the use of a 10x magnification loupe. The cut is the shape and polish of the diamond and also the quality of both of these factors.

In 2008, a gemstone steeped in history came to auction at Christie’s - The Wittelsbach Diamond. It was bought by The House of Graff for a documented record price of £16.4 million.

The first so-told account of the stone dates to 1664, when the blue diamond is believed to have been received by Margarita Teresa, daughter of the Spanish King Philip IV on her engagement to Leopold I of Austria, the Holy Roman Emperor. On her death only six years later, the diamond, which is thought to have been set in a hair ornament, was inherited by her husband. It was then passed along the line of his wives until the death of his third wife, Eleanora Magdalena.  When she passed away, the diamond is said to have been inherited by her youngest granddaughter, the Archduchess Maria Amalia of Austria.  She married Prince Charles Albert, who was a member of the Bavarian branch of the House of Wittelsbach, hence the diamond became so named. 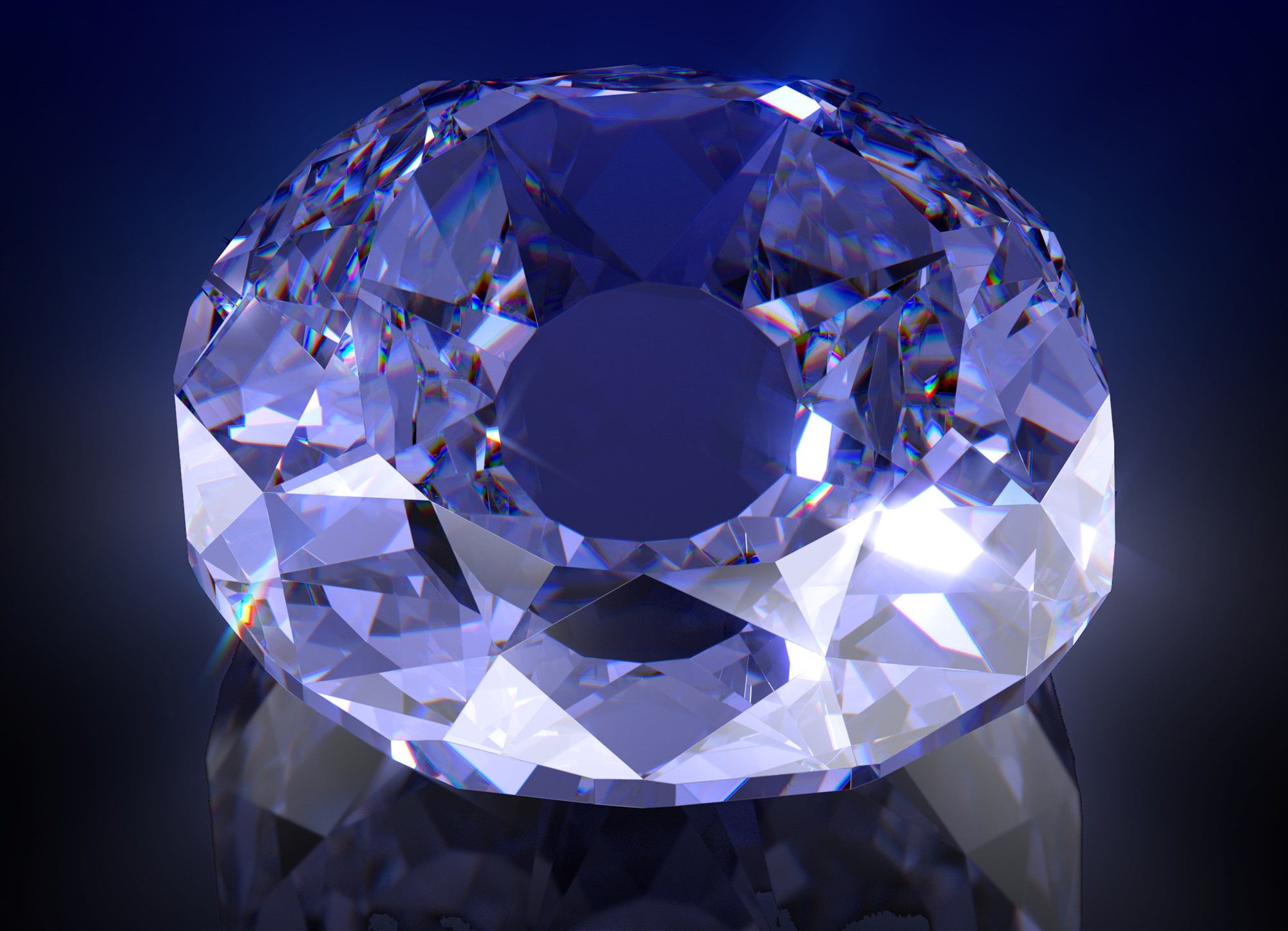 It remained in the Bavarian royal family and later, by order of Maria’s son, was mounted into the insignia of the Order of the Golden Fleece. This was an impressive piece of jewellery, which was undertaken by a Munich jeweller, with the diamond set amongst 700 brilliant diamonds. It continued to pass along the Bavarian royal line until, in 1806, it was mounted into Maximilian I Joseph von Wittelsbach’s crown on his coronation as King of Bavaria.

During the First World War, the Bavarian crown jewels were moved to a secure location.  After the war, the German state became a republic and the monarchy was broken up.  The Wittelsbach was seen for the last time at a state function in 1921 at the funeral of the last Bavarian king, Louis III. The relatives of the late king fell on hard times after the war and it was agreed by the government that the diamond could be sold to help raise funds.

It was offered for auction but failed to sell. Seemingly disappearing from the general public’s sight, it had actually been sold to one of the most famous diamond dealers of the time - Romi Goldmuntz. On his death his son tried to re-cut the diamond but was stopped by jeweller Jospeh Komkommer, who recognised its importance and, with help, purchased the diamond for himself. It then passed through several other hands until 2008 when it was once again put up for auction.

Prior to Graff owning the diamond, it had been graded as a VS2 Clarity and a colour of Fancy deep greyish-blue with a carat weigh of 35.56 carats from GIA when it was sold in 2008. On purchasing the diamond, Graff took the magnificent stone and had it re-cut to improve its clarity and colour.

Taken from ‘Historical diamond: The Wittelsbach-Graff owned by the legendary diamond house – Graff’, written by Sworders’ Jewellery Valuer, Prudence Hopkins, for her Diamond Diploma from the Gemmological Association of Great Britain in June 2018. Click here to read the full essay.

Talk to a Specilaist

Catriona has been in the jewellery trade for over 35 years, spending 15 years working for the crown jewellers, Mappin and Webb. She is a registered valuer with the National Association of Jewellers, who through her knowledge and enthusiasm has overseen a huge expansion in our jewellery sales.

Prudence is an auctioneer and jewellery valuer at the Stansted Auction rooms and Head of the Designer Handbags and Couture department. She has a BA Honours in Historical Fashion and Costume and a Gemology Diploma from The Gemological Association of Great Britain. During her time working in the industry she has built up an extensive knowledge in fine and decorative arts.