Born in the village of Schwanden, high in the mountains of eastern Switzerland, Lill Tschudi (1911–2004) was first introduced to the medium of the linocut as a child on a school trip to see an exhibition of works by Norbertine Bresslern-Roth (1891-1978).

She attended the Grosvenor School of Modern Art in London for a brief period from 1929-1930, but maintained a close working relationship with her Grosvenor School lecturer, Claude Flight, for many years after. Flight was to be her point of liaison with the British art world for the rest of her life.

Claude Flight found his calling as an artist when he was in his thirties, having previously put his hand to engineering, farming and beekeeping. His observations of the pace at which the modern world moved would go on to be an inspiration to Tschudi and his other students. He wrote in 1925 “Time seems to pass so quickly nowadays. Everybody is in a hurry… this speeding up is one of the psychologically important features of today. Traffic problems, transport problems, everybody is on the rush either for work or pleasure; business is hustle, the Cinema all movement,”.

Having set the tone for a new form of art that celebrated the speed and hustle of the new world they found themselves living in, Tschudi and her peers responded with works distinguished by clean-cut blocks of colour and an exhilarating sense of dynamic movement.

Throughout her lifetime, Tschudi produced 355 linocuts and her work is now held in major print collections around the world.  The V&A and British Museum have both acquired her works. 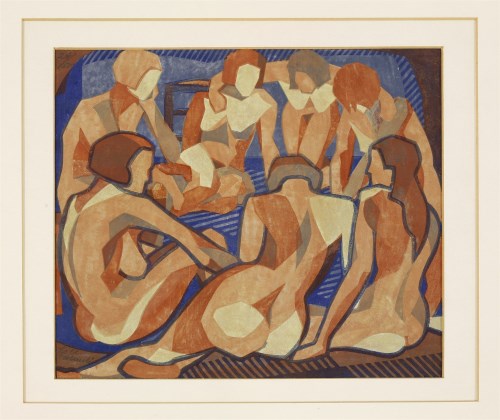