As a nation of animal lovers, few of us can resist the charm of dogs, cats and horses, so it is no surprise they have been the subject of fascination for so many artists over the years. Add game birds and wild animals from around the globe and the possibilities seem endless when it comes to capturing the character, movement, spirit and colour of the natural world.

The genre lends itself well to collecting and, because it spans a number of fields, can also be a great investment. As we collectively lose our connection with nature, it is little surprise the genre of wildlife painting is enjoying a renaissance. And while our tastes (and demand) may have changed over time, the enduring appeal of animals has never waned. 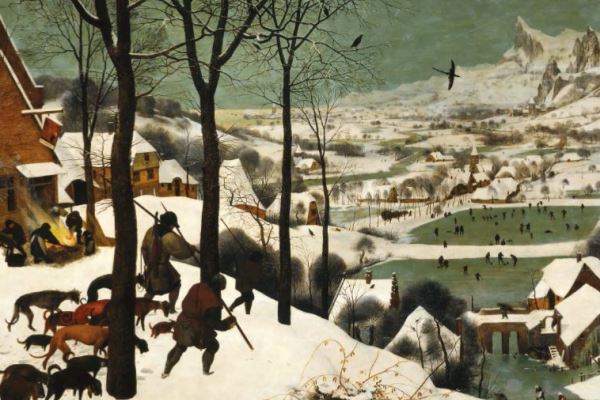 Dog lovers are a passionate breed. Whether it is the depiction of a well-known pet (such as David Hockney’s dachshunds, Stanley and Boodgie), the singular character of a particular breed, or their role as working animals, the appeal of canines to dog-loving collectors is endless.

Throughout the ages, dogs have been used in art to convey symbolism and meaning, from loyalty and dedication, to strength and watchfulness. From Roman mosaics and pottery, the earliest depictions moved onto hunting scenes in Renaissance murals or medieval books of hours. Tapestries, woodcuts and portraits that included dogs, as well as genre paintings, would have followed. Consider Brueghel’s Hunters in the Snow or Van Eyck’s The Arnolfini Wedding, where the little dog depicted is not just a symbol of fidelity, it is also – because the Affenpinscher is a rare breed - a sign of the owner’s wealth.

Van Dyck’s celebrated portrait of Charles I’s children with what appears to be a mastiff and a spaniel, emphasises the companionability of dogs. However it was in the 19th century that dogs started to take centre stage in portraits, with hunting hounds and lap dogs among the artists’ favourites. This was before Sir Edwin Landseer caught the mid-Victorian imagination, when the rising class of industrialists and businessman started to collect art as part of their process of gentrification. Nothing reinforced the sense of class and belonging like the portrait of a stag in a Highland setting above the fireplace. 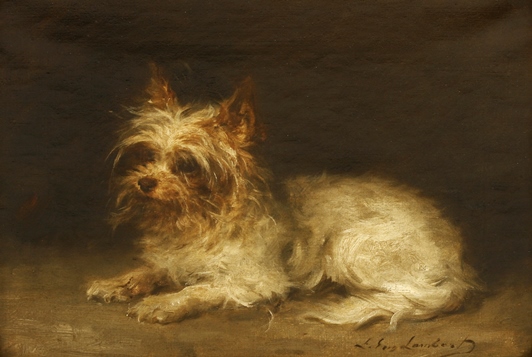 The 19th-century demand for dog portraits sparked the interest of many an artist; the trick is identifying the best among them. For my money, you would be hard pressed to beat John Emms, the Norfolk-born son of another artist, Henry William Emms. Emms’ talent lay in his portrayal of dogs and horses, often with the hunt as his theme. A keen hunter himself, it was only natural that he should have pursued his passion in art, focussing on horses and dogs, especially foxhounds and terriers.

What makes him stand out? His outstanding ability to convey the character and vitality of the animals he depicted. His most successful work, New Forest Foxhounds, from 1898, depicts the pack at rest in kennels, providing multiple characters among them. More than a decade ago it sold for a record $843,000 (£622,000) in New York. Less expensive works by Emms turn up regularly at auction, with process ranging from around £2,000 up to about £40,000, with the occasional rarity able to double that. 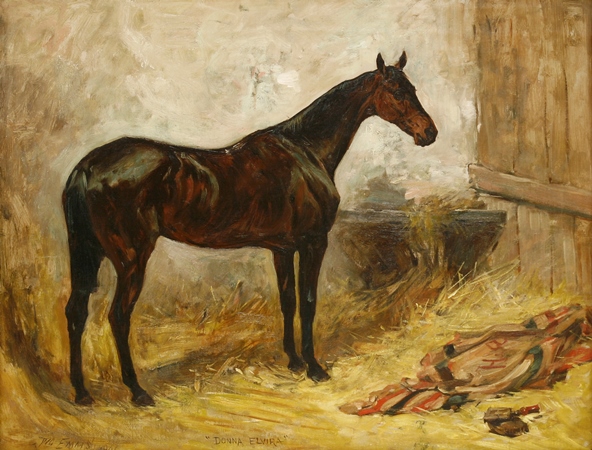 Though not commanding the same price as Stubbs, John Frederick Herring is another 19th-century artist who should excite interest. Aside from being a talented sign writer, Herring was a dedicated painter of horses from his earliest years. In fact, he spent so much of his spare time painting equine portraits for inn parlours that he became known as the “artist coachman”. His talent was soon spotted by wealthy customers, and he began painting hunters and racehorses for the gentry.

The businessman, and later Lord Mayor of London, William Copeland was the most significant of these patrons, commissioning a number of works from Herring, who went on to appointed as animal painter to HRH the Duchess of Kent, before winning commissions from Queen Victoria.

Like Stubbs, Herring’s attention to anatomical detail was of the first rank and matched only by his outstanding ability to capture the sheen of a racehorse’s coat and the alertness of its demeanour. Prices can reach six figures for Herring, but his better works are more commonly found at around £20,000 to £40,000 and upwards in the UK provinces. 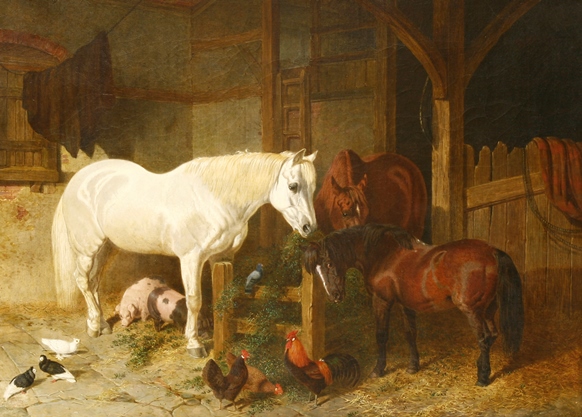 A generation or so older than Herring, Sartorius was another avid recorder of hunting and racing scenes. Catering for the leading sportsmen and owners of the day, who commissioned great works for their country houses, he enjoyed the patronage of the Prince of Wales and the Earl of Derby, among others. Again, his ability to convey character, vitality and the thrill of the chase set him apart from his lesser contemporaries. He often depicts horses fully alert or alarmed, even straining, with an eye towards the artist. Expect to pay £5,000 to £10,000 for a fine example of his work at auction.

A century later it was Munnings who was the leading proponent of the genre, ably capturing horses’ dynamism, drama and personality, whether on the racecourse, out with the hounds or simply trotting across the fields. The style of his exquisitely impressionist pictures is easy on the eye, and his horses are almost universally athletic and good looking. Colour, light and movement are key to Munnings’ success, giving his works extremely wide appeal. No surprise that his leading works have sold for millions of pounds at auction. Works in the hundreds of thousands have turned up for sale in the UK provinces in the last few years, but more regular sightings come for paintings around the £20,000 to £40,000 mark. In December 2014, Sworders sold the watercolour, A Lady on a Hunter Jumping a Hedge, for £27,000, hammer. 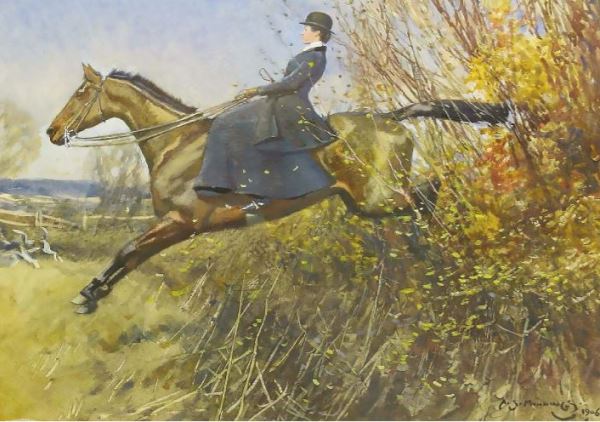 Throughout history, birds both real and imagined, have captivated humans. While a part of everyday life, their ability to sing and fly makes them appear magical. The art of depicting birds emerged in the cave culture of Paleolithic times. The first drawing of a bird (that we know about) was of an owl, found on the wall of a cave in Vallon-Pont-d’Arc, France.

The Romans believed the flight and sounds of birds provided clues to the future, or indicated the will of the gods. In early Egyptian culture the ba (often portrayed as a hawk with a human head) represented the spirit of a deceased person with the ability to flit between this world and the next. On a more prosaic level, the UK’s almost 600 documented species of birds have given endless inspiration to artists down the centuries. 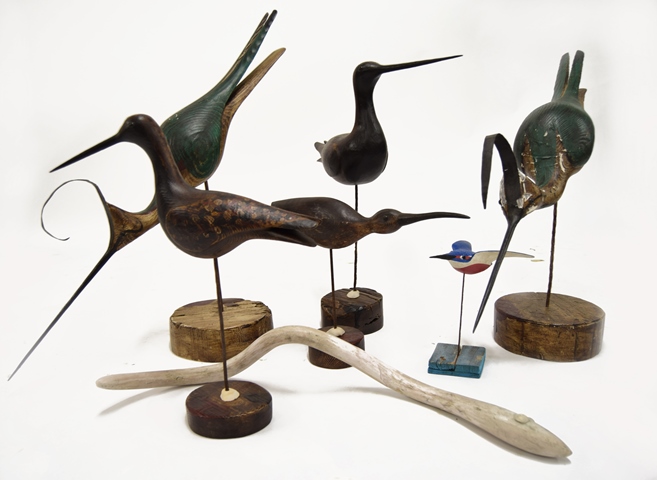 Guy Taplin (b.1939). This selection of bird sculptures will be offered for sale in our inaugural Sporting Art, Wildlife and Dogs sale on April 25

In the UK Thorburn is the name that stands above all others in this field. Probably best known for his lifelike watercolours of game birds on the moors, Thorburn’s pheasants, grouse and partridge are just part of his oeuvre; he was equally accomplished in depicting finches and songbirds in the wild, as well as birds of prey and small mammals, and provided illustrations for The Birds of the British Isles and their Eggs and A History of the Birds of Europe, Including all the Species Inhabiting the Western Palaearctic Region.

Thorburn is regarded by many as the best British bird painter there has ever been and his draughtsmanship and ability to create settings that show his subjects at one with nature single his work out form the rest.

Thorburn appeals to a myriad of collectors; sporting enthusiasts, for his pictures of grouse and pheasants; Scottish collectors because he was Scottish; and ornithological collectors for his garden birds. The top price paid for one of his works is £252,000, but a decent painting of a pheasant can make £15,000 to £20,000 at auction, creating a stir at any scale.

Scott was the son of the celebrated but ill-fated Antarctic explorer, Robert Falcon Scott. He had a dual career as an artist and conservationist. Birds in flight – especially in formation – across wild natural landscapes and cloudy skies were a particular forte, but Scott was also a master of close-up studies of ducks, geese and even tits and songbirds. His natural affinity for the creatures he depicted is redolent in every image, and he had a particular talent for capturing the atmosphere and majesty of the landscape, producing haunting scenery. His works come up at auction fairly regularly and tend to command prices of between £1,500 and £5,000 for a typical oil on canvas.

When Western explorers first set eyes on animals in far-flung locations, artists had the difficult job of depicting their likeness without having seen them. George Stubbs’ interpretation of a kangaroo was famously based on an inflated skin, skull and written descriptions. Since then elephants, lions, cheetahs and other majestic beasts of the savannah have all enjoyed an eager following among modern collectors. Those who captured them in oil and watercolour often found inspiration by travelling out to Africa to see their subjects in the flesh.

Shepherd is perhaps the best known today of these traveller artists. An outspoken conservationist who also painted steam locomotives, his impressive, highly-detailed animal portraits display exceptional draughtsmanship and atmosphere, which despite an element of critical snobbery among intelligentsia who sometimes dismiss his achievements, engages directly with many collectors. His top price is about £115,000 at auction, with his elephant pictures leading the field.

Kuhnert was one of the finest animal painters of his generation. He travelled to Africa and, despite not being a hunter, tracked animals through areas of Central Africa which were then still largely unexplored by Europeans. He developed a great command of animals both in anatomical sketches and their natural habitat. Kuhnert has made up to £365,000 at auction, although prices for watercolours with gouache can start at a few hundred pounds.