Our Asian Art Auction on 28 May became a global event with bidders from all over the world, here we take a look at some of the highlights.

The silk kesi scroll, dating from the 19th century depicts the folkloric Peach Festival, a highly auspicious event held once every 6000 years at the celestial Jade Palace in Paradise. It shows a pantheon of Daoist immortals and deities celebrating as the goddess Xiwangmu, Queen Mother of the West, descends gracefully from the sky seated astride her phoenix. As part of her birthday festivities she bestows upon her followers great fortune and perhaps one of the peaches of immortality. Objects on the theme are favourite birthday gifts in China. 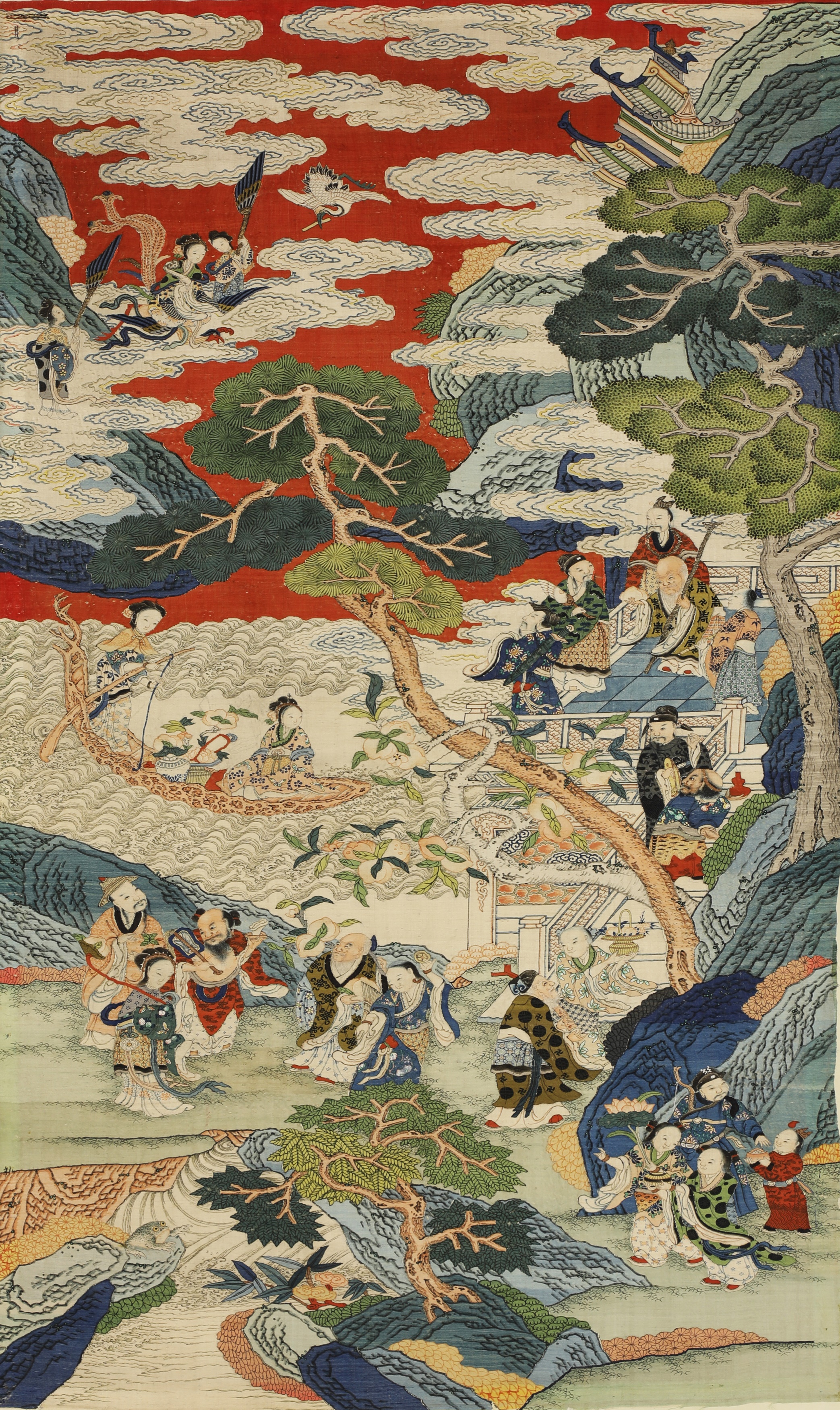 Major purchasers such as this are being made with increasing confidence online. With the saleroom closed to the public, Sworders sought to provide multiple images and detailed condition reports online to provide buyers with all the information they need to make informed purchasing decisions.

A collection of Chinese textiles came with an exceptional provenance. The nine lots, including embroidered silk garments and panels, have been consigned by descendants of William Orr Leitch (1871-1948), a Victorian engineer who left Scotland in 1897 to work on the Chinese government railway. The Leitch family remained in China throughout the Boxer Rebellion, periods of Japanese rule and the civil war. However, they later returned to Edinburgh taking up residence in Gordon Square where they furnished a home with many treasures. 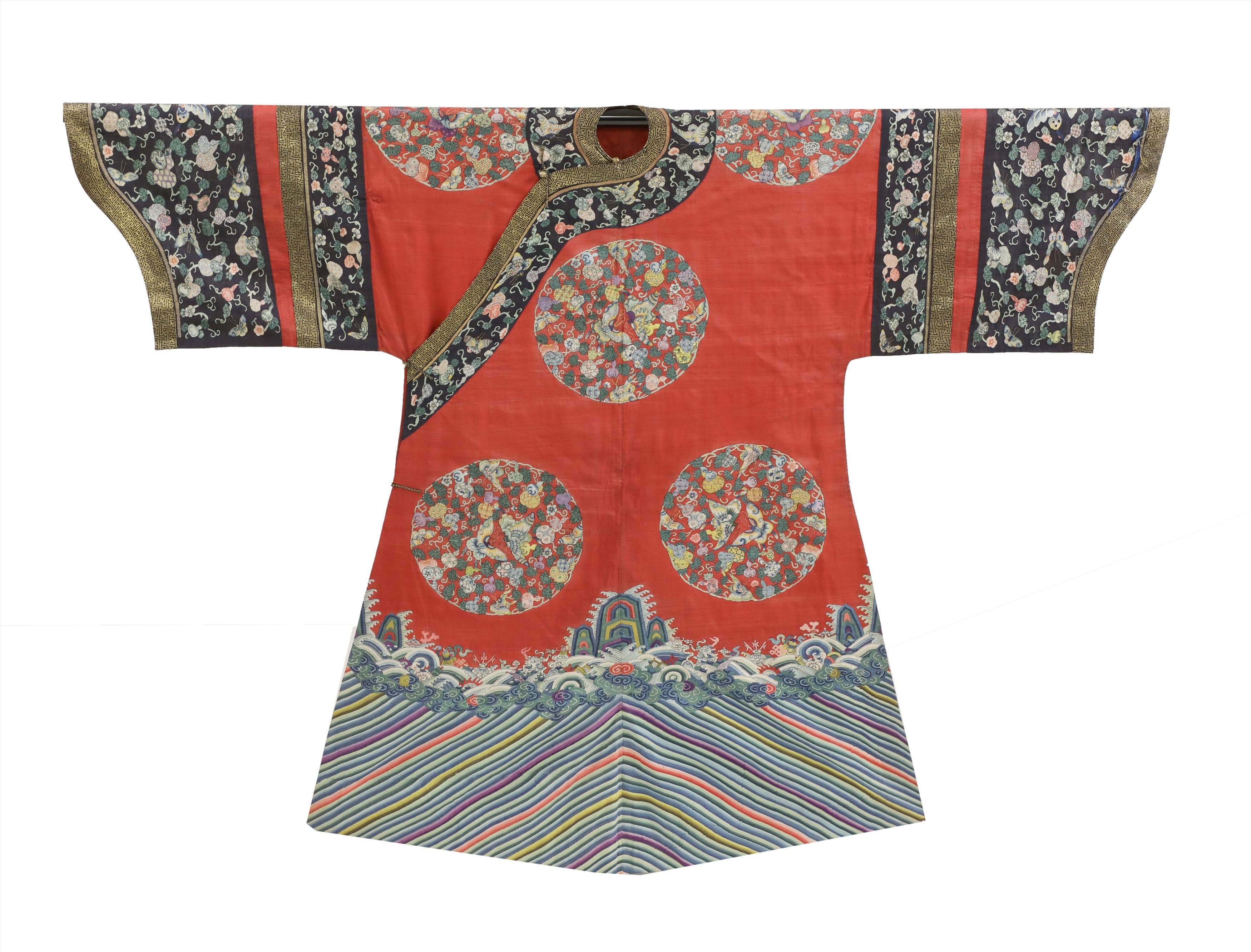 Among the pieces retained by the Leitch family is a Qing dynasty (1644-1911) embroidered kesi red and black robe, a luxury garment decorated with the auspicious motifs of butterflies and double gourds. To the hem is a splendid border of rocks and precious objects amongst waves while borders of key fret are picked out in gold thread. It carried an estimate of £1,500-2,500 but sold to a Chinese buyer at £6,200.

Sold at £11,000, this time against an estimate of £300-500 was another example of Qing courtly dress – an official's hat with a jade and glass ball finial offered together with a hardstone beaded chaozhu necklace consisting of 108 beads with spacers and pendant drops. 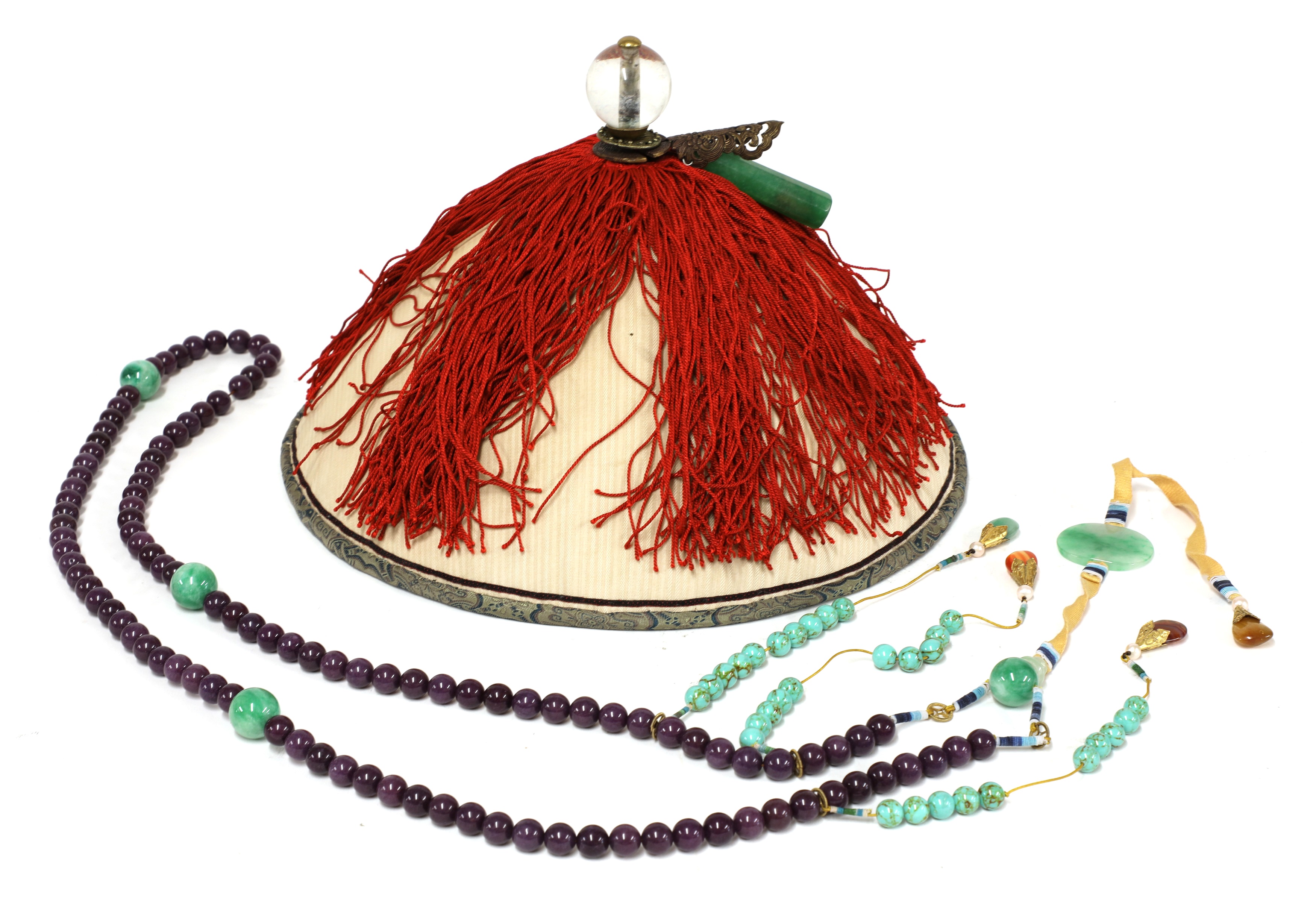 A Chinese official's hat, with a glass ball finial and a jade tube ornament, and a beaded chaozhu, Sold £11,000

Two Chinese works from a London private collection formed in the middle of the 20th century were also well received. A bronze censer and cover with elephant feet, handles and a recumbent elephant finial sold at £7,000 to a Chinese buyer. Standing 50cm high it had a honorific four-character Xuande seal mark but probably dated from the 18th or 19th century.

A pair of celadon jade table screens, each on a tall hardwood stand carved as a recumbent buffalo, were carved to one side with ducks among weeds below an inscription and a four-character Qianlong seal mark. They too made £7,000, this time selling to a London buyer.

Blue and white porcelain made during the Kangxi (1662-1722) period remains popular with both Western and Eastern buyers. Here a triple gourd vase painted with two literati in a rocky landscape sold at £3,500 while a wine cup painted with ladies with a tree and a planter took £3,200. 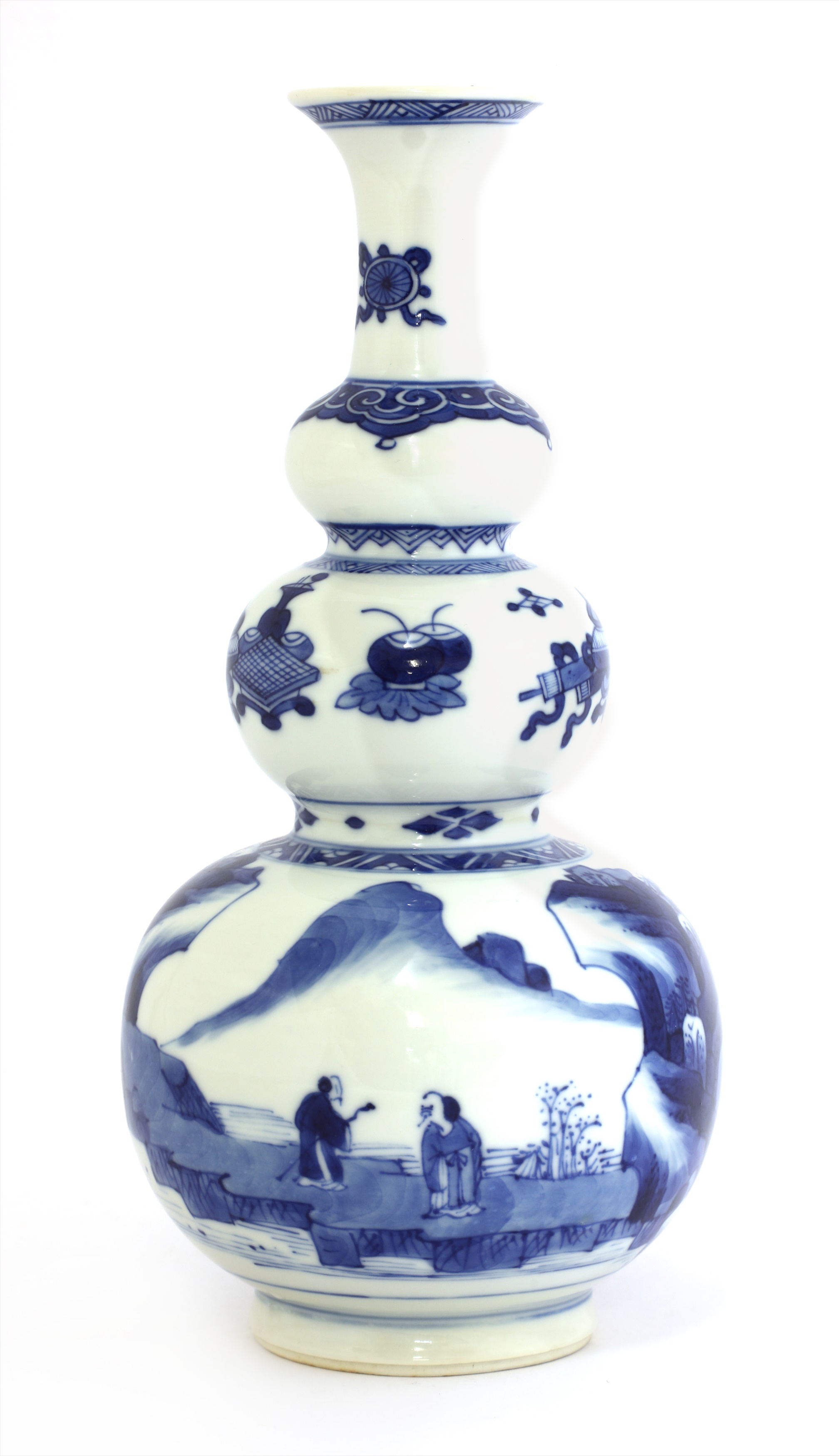 A woodcut print by the great Katsushika Hokusai (1760-1849) from the series Shokoku Taki Meguri (Going Around Waterfalls in Various Provinces) sold to a US buyer at £5,800 (estimate £500-800). Published c.1833-34, this scene depicts the waterfall at Yoshino, in Yamato where, as detailed in the inscription, a legendary warrior hero Yoshitsune was said to have washed his horse. 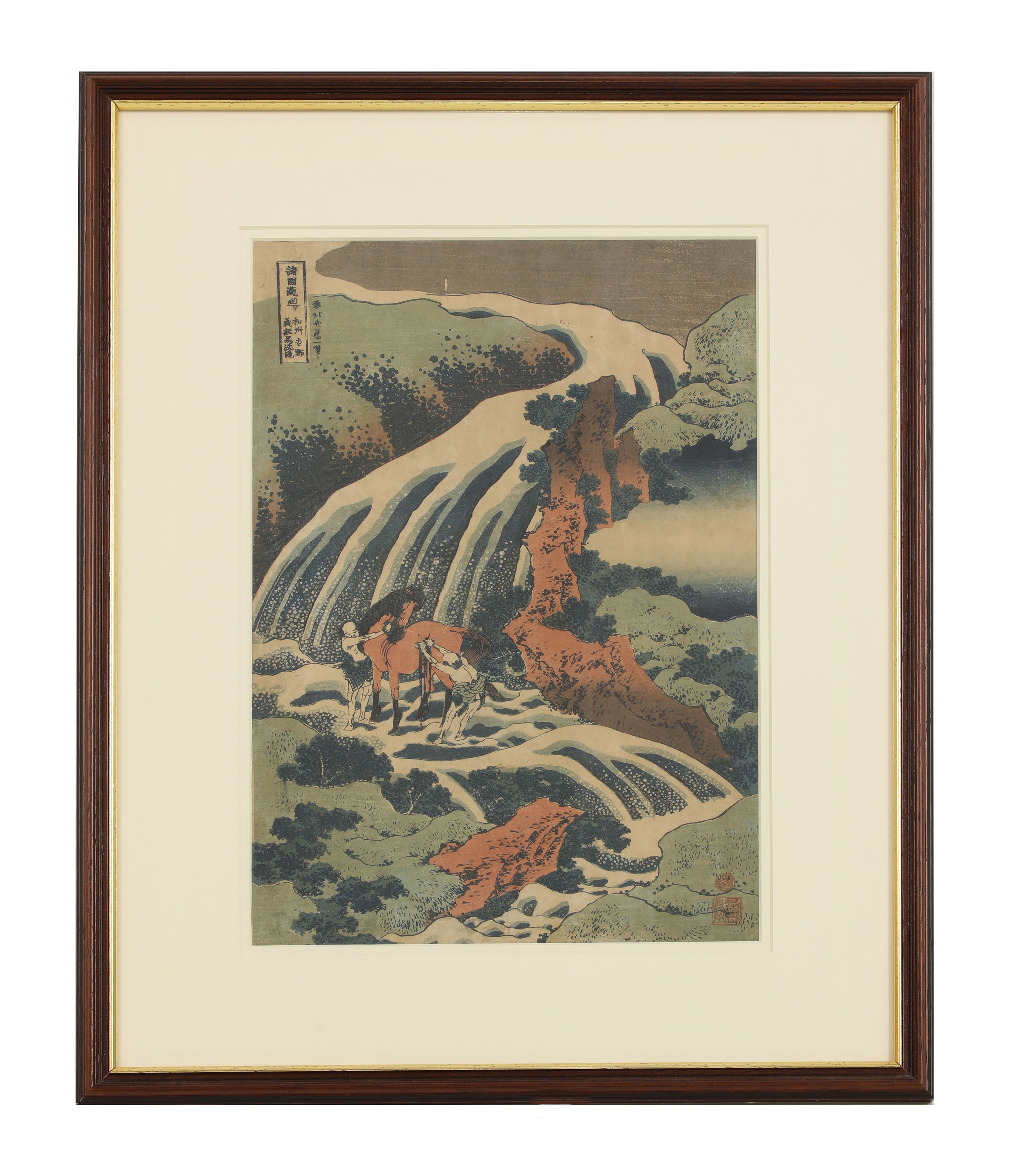 Hammered down to a London client at £11,000 (estimate £1000-1500) was Homage, an ink painting by Toko Shinoda (b.1913) – the first Sworders had offered for sale. Toko was described in a 1983 Time magazine article as 'A conservative renegade and a liberal traditionalist' and this is borne out in this work of 2009 which marries the tradition of ancient calligraphy with modern abstraction. 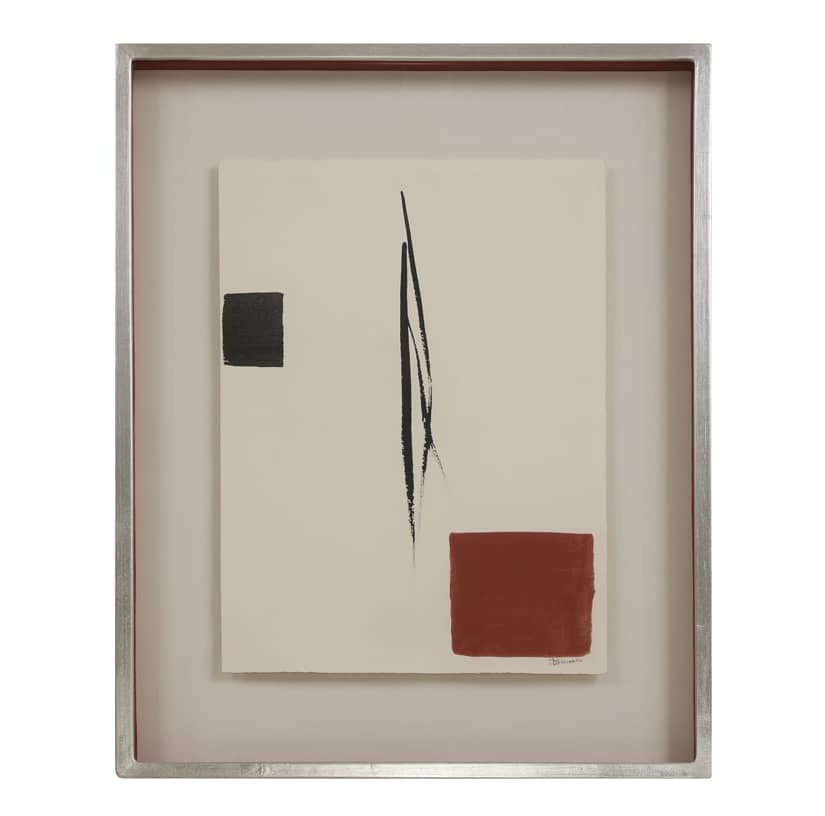 For more information about the sale, or if you have something you would like to consign, please contact Yexue Li