Antique furniture is all brown right? Wrong! It is one of the biggest misconceptions that all period furnishings are dull and brown, in truth they often form part of a bright and colourful interior scheme and painted furniture continues to be one of the most desirable fields of antique collecting.

Antique furniture is all brown right? Wrong! It is one of the biggest misconceptions that all period furnishings are dull and brown, in truth they often form part of a bright and colourful interior scheme and painted furniture continues to be one of the most desirable fields of antique collecting. Popular among private collectors and interior decorators, championed in the eclectic and colourful country house aesthetics popularised recently, our Fine Interiors auctions are a fantastic platform for this type of furniture.

A pair of George III satinwood and crossbanded pier cabinets

From as early as the medieval period colour was used to add status to furniture often in a religious setting, this soon transferred to the domestic interior with bright pigments often appearing muted in the candle light.  A tradition which was re-invigorated in the late seventeenth century with recently established China trade routes introducing the aristocracy to oriental lacquerwares which were much copied by talented western craftsmen such as Giles Grendy, William Vile and others.  Thomas Chippendale too was a great advocate of the Chinese taste, evidence of this can be seen in the suite of furniture produced for the theatrical manager David Garrick, which is richly decorated in cream and green with a design inspired by Chinese wallpapers, the suite is now housed in the Victoria and Albert Museum - see here.

The designs in George Hepplewhite’s ‘Cabinet-Maker and Upholsterers Guide’ of 1788 could perhaps be considered more quintessentially British, with light airy neoclassical and regency designs often appearing adorned with bright coloured floral sprays, swags and harebells laid directly on to satinwood. In the right setting these designs do not appear old fashioned and fussy but well drawn and elegant and will fit quite happily as part of a minimal design scheme. Alternativly they can add depth, texture and hidden detail to a more ornamented heterogeneous interior.

The grand tour also inspired architects and designers throughout the 18th Century, none more so than Robert Adam who’s classical and Etruscan (or Greek as it turned out) inspired designs that appeared both on the walls of the rooms he designed as well as on the furniture within them, appear beautifully ordered and considered and although heavily ornamented not busy and overbearing. The limited pallete used and the lightness of touch with which it is applied leaves an fantastically elegant result, that can be seen just down the road from the saleroom at Audley End House, which is well worth the visit if you are in the area. There is a renewed fascination with romanticism of the grand tour and the pattern and decoration inspired by it are evident in the Instagram accounts of the London antique and design trade.

Alongside this more measured and considered use of colour and ornament there is a parallel tradition connected with painted folk art and vernacular furniture, that rose from provincial furniture makers across Europe.

In Germany, Austria and Scandinavia the tradition of painting furniture in this way is long established. Beautifully rustic painted armoires, honest cupboards and side chairs, primitive in construction, are relatively common place and date typically from the late 18th and 19th century.  These often appear dated and painted in bright reds, greens and yellows with vases of flowers, birds and domestic or country scenes. The naive charm of the pieces and their form, which is often born out of pure practicality can inject a sense of authenticity and focus to an otherwise stark interior. 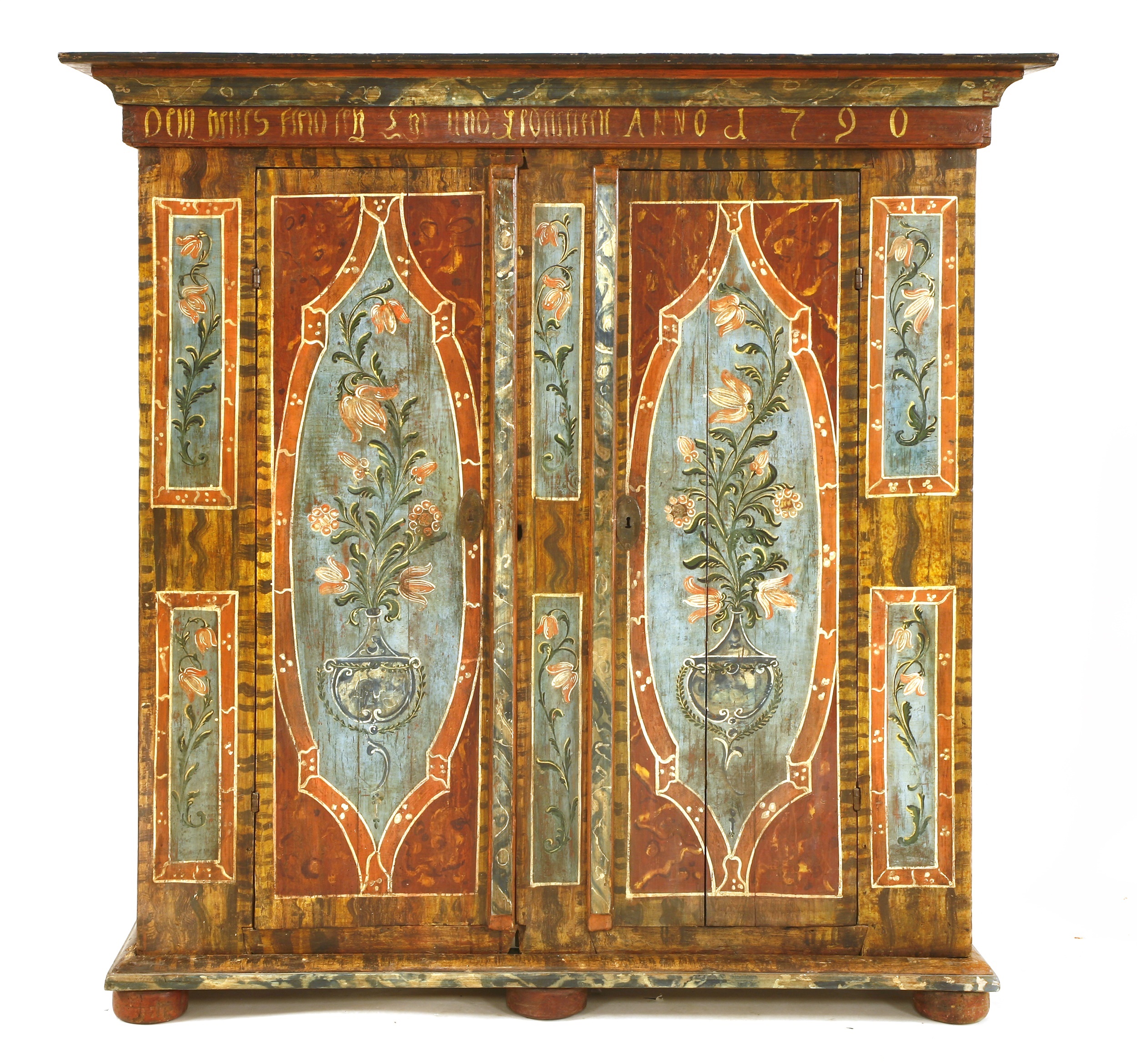