James Robertson Mowat (c.1849-c.1894) was born in Stromness, one of six children. His brother Thomas was also a sea captain.

The Mowat brothers were part of an ancient tradition of seafaring by Orkney Islanders, which had produced a long line of experienced sailors who were able to handle ships and navigate both by the stars and with the rudimentary charts available.

Great bravery and daring was required in order that they should land in new places and bring home unheard of goods that were eagerly snapped up by a fascinated and inquisitive public.

These hydrographic charts provide a fascinating and rare insight into one sea captain's activities. To discover a unique set of charts such as this is unusual and his handwritten annotations give them a very personal dimension.

James Mowat entered employment with the shipping company McIlwraith McEacharn soon after its founding in 1875. He obtained his master’s certificate (number 94419) at Dundee in 1880. During the following years, he captained various ships: Scottish Hero; Scottish Wizard; Scottish Prince and Scottish Bard.

In 1876 the firm entered into an agreement with the State of Queensland for the carriage of migrants from Britain to ports north of Maryborough. The principal ones were Hervy, Moreton and Keppel Bays. At the time a voyage from London to Queensland took from 13 days to 4 months.

The Australian Government was extremely keen to encourage new settlers. Queensland particularly needed those with a farming background and took stands at British agricultural shows to advertise the advantages of this new life.

This became the bread and butter work for McIlwraith, McEacharn and Captain James Robertson Mowat. 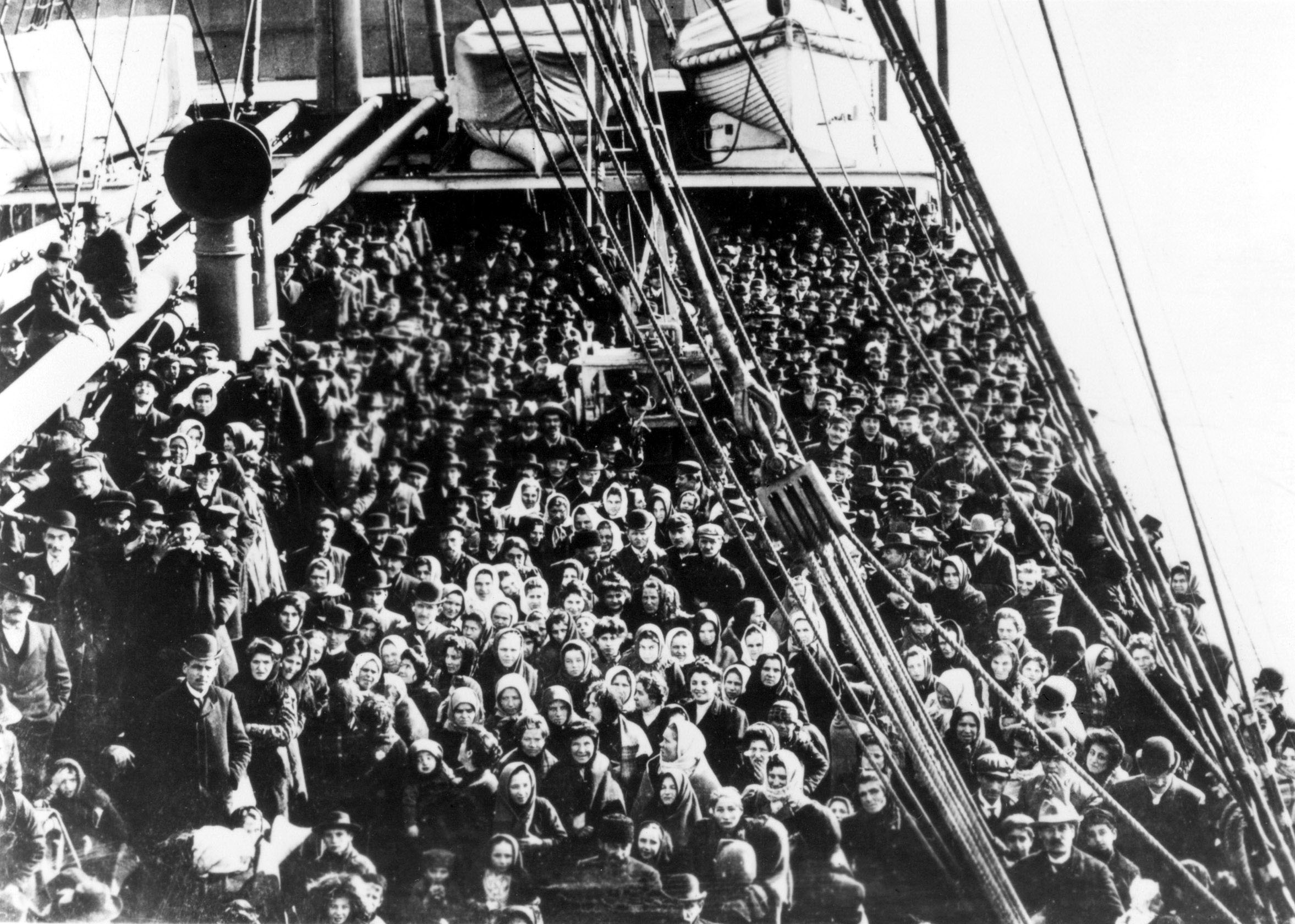 Their first vessel, the Scottish Bard was completed in April 1876 and in the same year the Scottish Hero and Scottish Knight were delivered.

In 1877 the Scottish Lassie joined the fleet and during the next year the Scottish Admiral and Scottish Prince were completed. These were part of the original fleet of 11 vessels, which became known as the 'Scottish Line'.

Mowat captained the Scottish Hero on a voyage from Plymouth to Townsville in 1880, which is recorded on one of the charts. The ship had been previously captained by his brother Thomas. James had been moved from another ship as the captain of the Hero was listed as Robert Fraser by July 1881. Subsequent voyages by the Hero are well documented, and one can see that these corresponded with Mowat’s trips, as many of the ports and seas mentioned are defined by these charts. 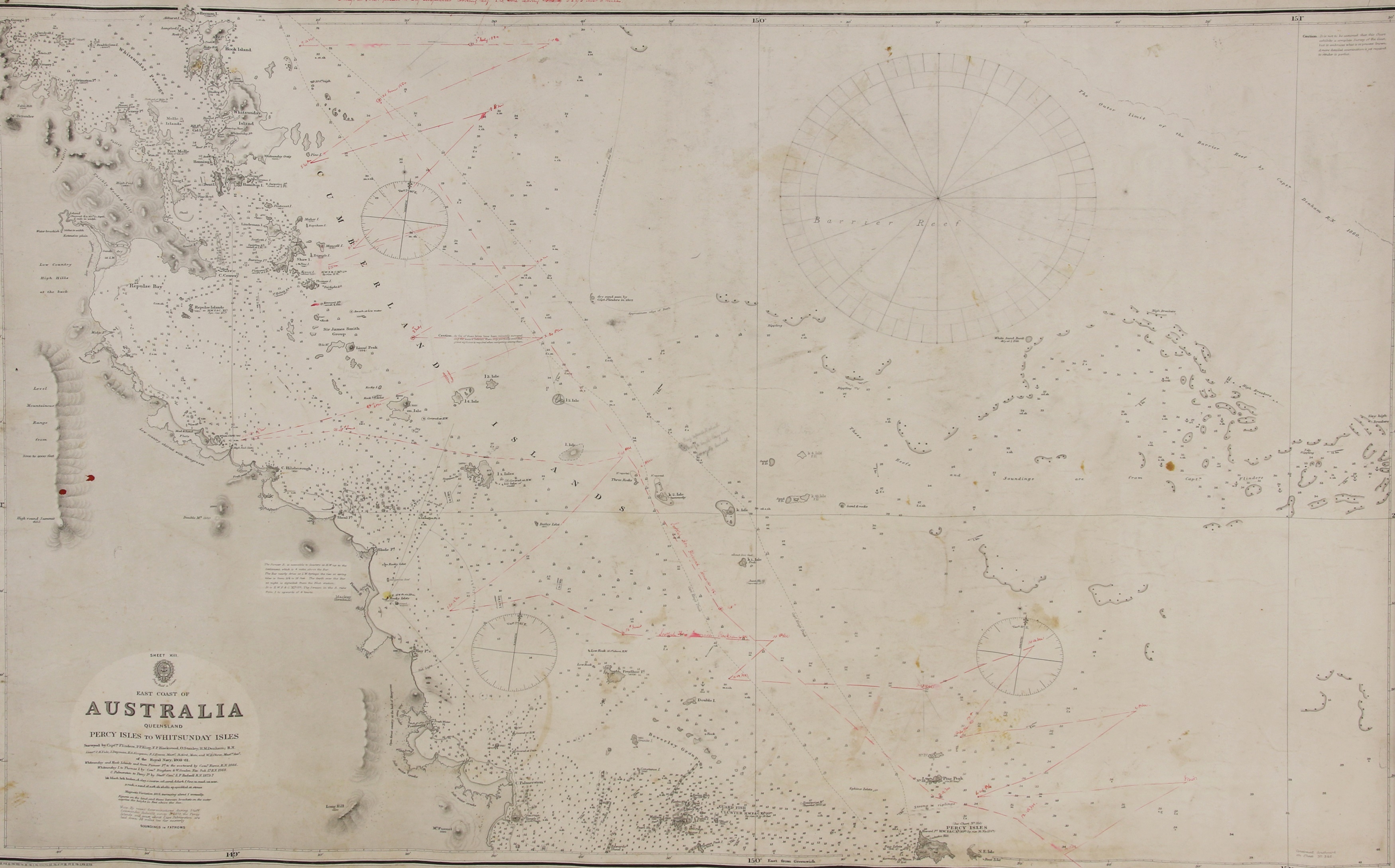 The collection of over 70 charts is fascinating in the breadth and variety of its locations - and particularly the differences in the degree of geographical knowledge available at the time. Hydrography was very much an ongoing exercise in the 19th century.

One chart of the great Sandy Straight, has a pencil drawing of the outline of a ship, tantalisingly similar to the ones used by the ‘Scottish Line’ and the intriguing script below - ’an immense waterspout stopped the building of this ship’.

A chart of the China Sea has extensive pencil annotations made during a voyage of the Scottish Prince, headed ‘Caution’...‘on 1st June 1882 the "Scottish Prince was becalmed......'

Several of the other charts also have pencil annotations warning future sailors of dangers encountered.

Many of the charts have prominent navigational landmarks such as lighthouses, churches and beacons shown as line illustrations and elevations of islands and coastlines, to assist visual recognition. Also, there are enlarged areas such as ports and suitable mooring places.

The discovery of these charts presents a unique opportunity to acquire not only pieces of history but also attractive and decorative visual reminders of the adventurous spirit of the sailors who risked their lives in the course of their work.

The condition of these charts varies considerably, with some, especially the ‘blue backs' in very good condition, but others, obviously used more frequently or stored in less than ideal conditions, with stains and tears. They would have had to be stored onboard and unrolled when required.

They have been divided into 23 lots, grouped by areas of the world, with between one and six in each lot. 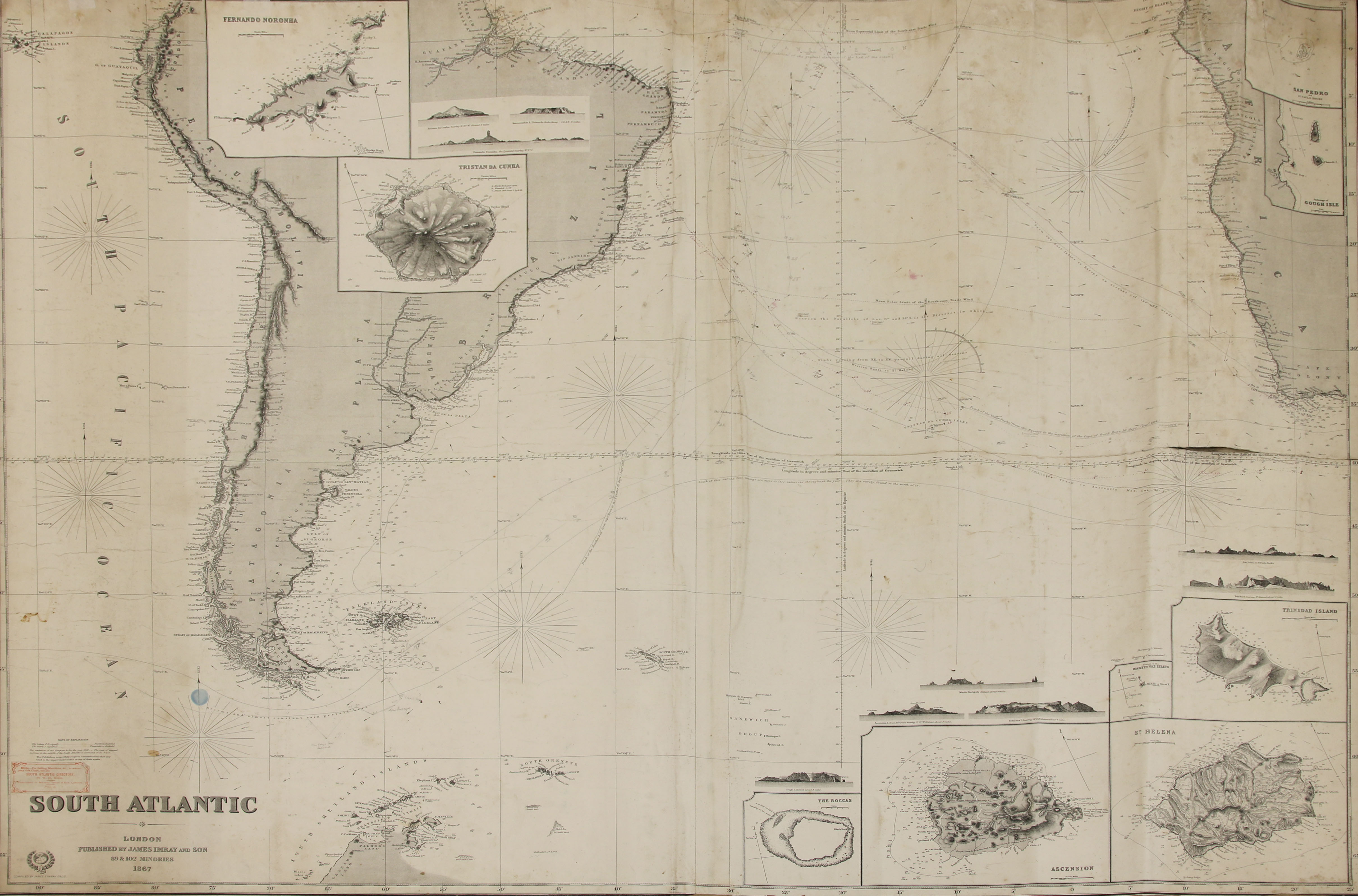 Since the first days of travel, exploration and naval expeditions, it had become essential to have maps and charts not only of the world as it was known at any particular point in history, but also of the likely weather conditions, sea conditions – currents, eddies, winds, and the accessibility of each land discovered – reefs, rocks, sandbanks, seabed constituents. Depth soundings indicating the draught depth available were key. Many vessels were forced to anchor offshore and send people ashore in smaller shallower boats.  The charts were principally created by the Admiralty, using information sourced by its naval captains, many of whom developed their careers not only in warfare, but also in exploration. Scientific mapping was part of the job.

The maps and charts were all originally drawn by hand while on the voyages, and then the more successful ones, or ones where patronage was available would be printed and published.

Almost immediately they became partially obsolete, as each expedition was obliged to record information from its trip and make this accessible to the Admiralty and map and chart makers.