Chinese Bowl Once Used As A Flowerpot To Fetch Thousands

A bowl that recently arrived at Sworders after many years of use as a flowerpot in a family home has to the base is a red six-character Jiaqing mark (1796-1820) but is it of the period?

Reign marks on Chinese porcelain are notoriously unreliable. Many are honorific, referencing a glorious epoch in Chinese history, or an era when a style or technique first emerged. Seldom too will a piece of Chinese porcelain carry the ‘maker’s’ marks that are common on European porcelain.

Instead, when valuing Chinese porcelain a greater degree of scholarship is required and that begins with a deep dive into style and quality of craftsmanship.

A good case study is the bowl that recently arrived at Sworders after many years of use as a flowerpot in a family home. To the base is a red six-character Jiaqing mark (1796-1820) but was it of the period? 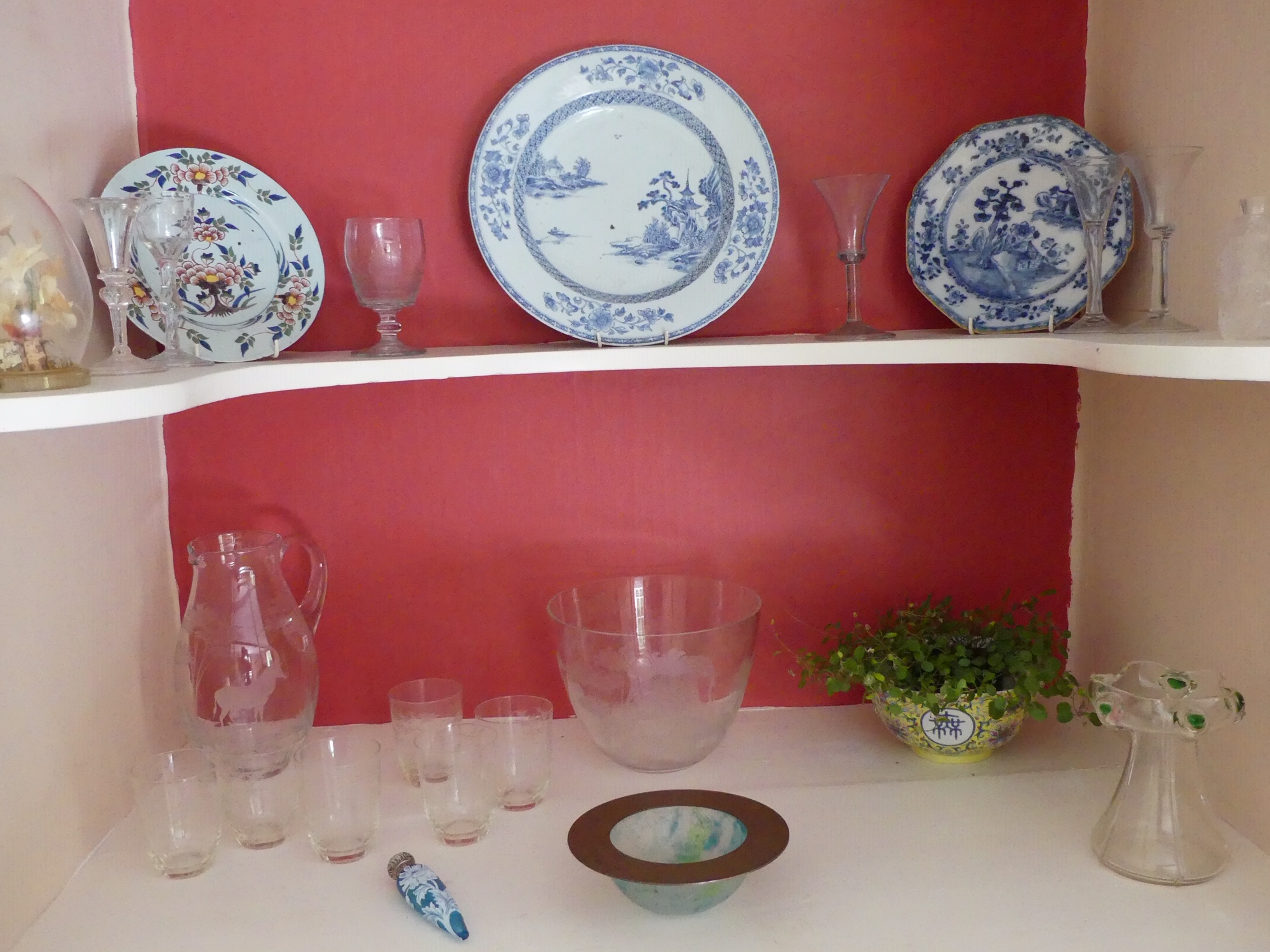 The bowl is finely potted, something that is immediately clear to those who have handled countless pieces of Chinese porcelain. It is unusually large at just over 20cm across and immediately obvious is the striking decoration. Medallions containing Chinese characters are accompanied by Buddhist emblems against a rich lemon-yellow glaze.

The ground colour is key. In the Chinese language, ‘yellow’ is homophonic with the word for ‘emperor’ or ‘royal’ and for that reason it was strictly reserved for porcelain destined for the royal household.

Using technology acquired from the West, the lemon-yellow glaze had been perfected earlier in the Qing period - probably in the last years of the reign of the emperor Yongzheng (1722-35).

Tang Ying (1681-1756), the famous superintendent of the imperial kilns at Jingdezhen, first records pieces with a ‘Western yellow’ glaze in the Taocheng Jishi (Records of Ceramic Production) of 1735. 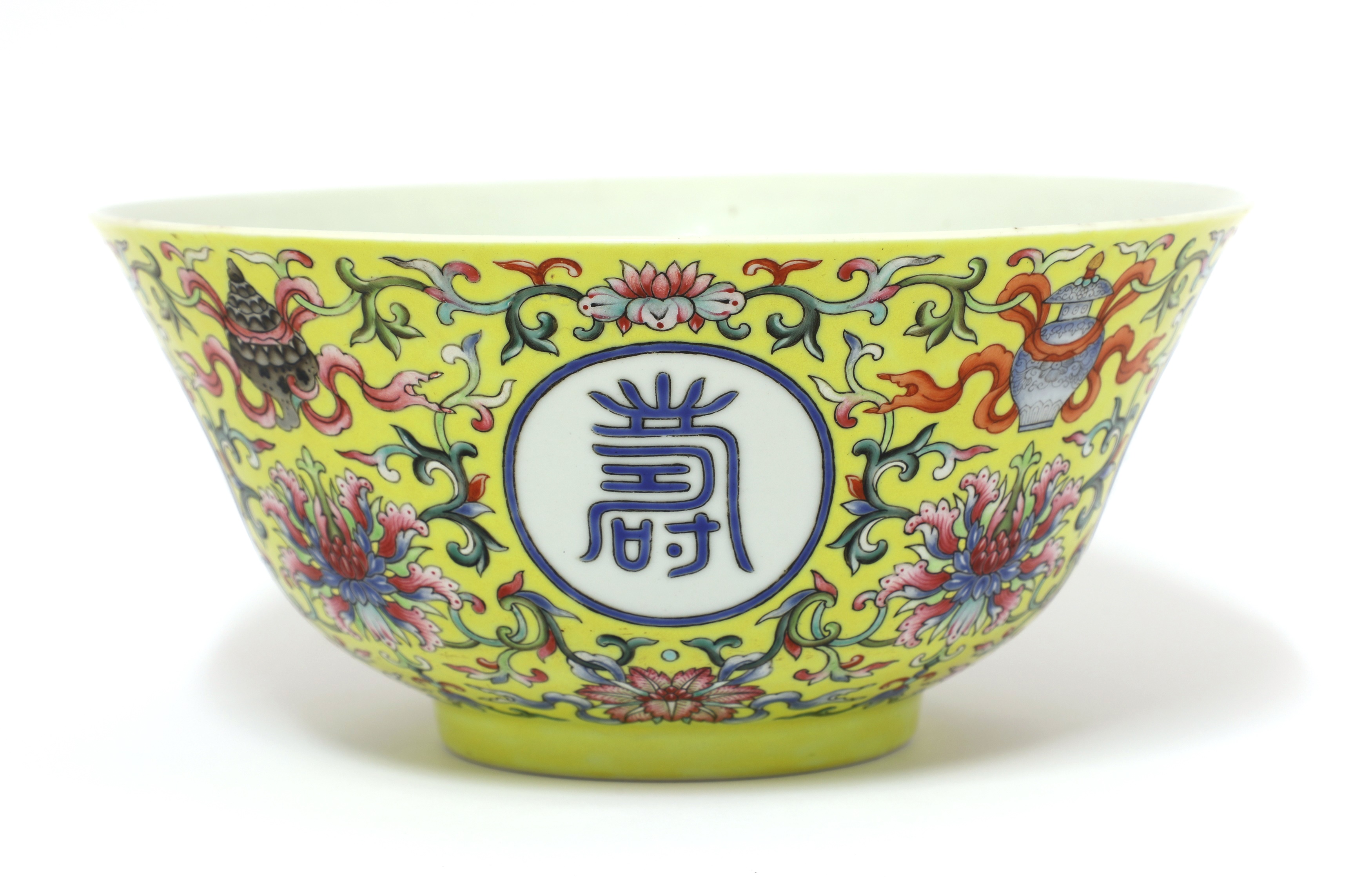 The glaze was not the only element on this bowl that demonstrates a Western influence. The European techniques of enamelling on metal had been introduced to the court of the emperor Kangxi (1661-1722) by Jesuit craftsmen and artists in the 1680s. The combination of an enriched ‘famille rose’ palette of colours and European brocade-like patterns borrowed from 18th century textiles proved hugely popular with the Qing. The style developed greatly during the long reign of Qianlong (1735-96) - builder of the European style structure at the Yuanmingyuan (the Old Summer Palace) - and was retained favour deep into the 19th century.

However, unlike the frivolity of the European rococo, symbolism remained hugely important in Chinese decorative arts. Since the days of the Song dynasty, Chinese ceramicists had followed the mantra ‘Tu bi you yi, yi bi jixiang’. The decoration must be intentional and the meaning auspicious.

The characters decorated in underglaze blue to this bowl read ‘Wan Shou Wu Jiang’ - the wish for great longevity. The phrase was probably first used on a series of famille verte wares made to mark the 60th birthday of Kangxi in April 1713 (some of them surviving in the celebrated Sir Percival David Collection at the British Museum). Some 1900 men over the age of 60 were invited to celebrate the emperor’s birthday - an occasion that fostered the Confucian ideal of respecting the elderly while bringing good fortune. Kangxi, whose reign of 61 years makes him the longest-reigning emperor in Chinese history, marked later birthdays in a similar fashion. The four-character phrase has been reserved for the imperial birthdays ever since.

This ‘birthday’ bowl also carries a religious reference. Tibetan Buddhism was heavily patronised by the Qing court as the emperors fought to establish their legitimacy. The Eight Buddhist Emblems (the parasol, a pair of golden fish, a conch shell, treasure vase, the lotus, an infinite knot, a victory banner and the wheel) were all popular motifs on porcelain and textiles of the period.

Most bowls of this style and period are much smaller, usually measuring between 10cm and 18cm across. There is an almost identical example from the Jiaqing period in the Palace Museum in Beijing that measures 18cm and similarly-sized bowls bearing the phrase Wan Shou Wu Jiang have been offered at sales in Hong Kong and London. However, the emergence of this larger piece does appear to be supported by the historical record. According to the Archives of the Imperial Workshops, it was common for Qing emperors to request pieces of the same design in a range of different sizes.

Of course, what an auctioneer or specialist can’t always do is predict the price such a piece might bring at auction. The bowl will be offered in the Asian Art sale on Friday 6 November with an estimate of £12,000-18,000.