Crime and Tragedy on the streets of Mexico City

At the age of 10, Enrique Metinides was given a brownie box camera by his father. The Brownie, launched in 1900, was a very basic cardboard box camera with a simple meniscus lens that took 2 1/4-inch square pictures on 117 roll film. Taking to the streets of the San Cosme neighbourhood of Mexico City where he lived, he began following grisly crime scenes: car crashes, street stabbings, shootings, suicides and murders.

At the age of  thirteen Metinides became an unpaid assistant to the crime photographer at La Prensa (The Press), joining him on shoots in fire trucks, Red Cross ambulances and police cars, and gaining the nickname El Niño (the boy) from the regular press photographers.

While today the authorities restrict access to such scenes, back then it was still possible for a photographer to approach the scene of an accident or crime. Metinides photographed his first dead body and published his first photograph when he was only twelve years old. 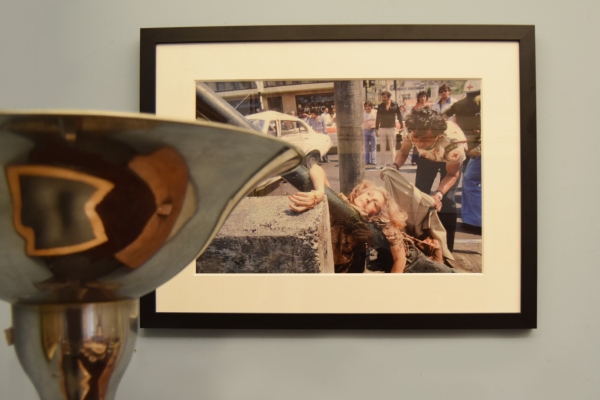 This colour print titled ‘Mexico City, April 29, 1979’, along with its certificate of authenticity, will be offered for sale by auction on Wednesday 1 November. The tragic scene captured by Metinides is that of Adela Legarreta Rivas, a Mexican journalist. Rivas had visited a beauty parlour where she had her hair and nails done in preparation for a press conference later that day. On her way home she was hit and killed by a white Datsun on Avenida Chapultepec.

During his fifty year career as a photojournalist Metinides never once left Mexico. He has won numerous awards and his work has been exhibited internationally, including The Museum of Modern Art in New York and The Photographers’ Gallery in London.