Discovered: The Mughals in Miniature

A 17th century Indian painting attributed to one of the finest artists of the Mughal court has been discovered in a private collection in Suffolk. To be included in a specialised category of Indian Works of Art in our Winter Country House sale.

A 17th century Indian painting attributed to one of the finest artists of the Mughal court has been discovered in a private collection in Suffolk. To be included in a specialised category of Indian Works of Art in our Winter Country House sale on December 5 with an estimate of £10,000-15,000.

A Mughal prince with his consort or ‘Shah Jahan in the Time of Youth’, a 24 x 14cm body colour miniature heightened in gold, has been in East Anglia for more than one and a half centuries. 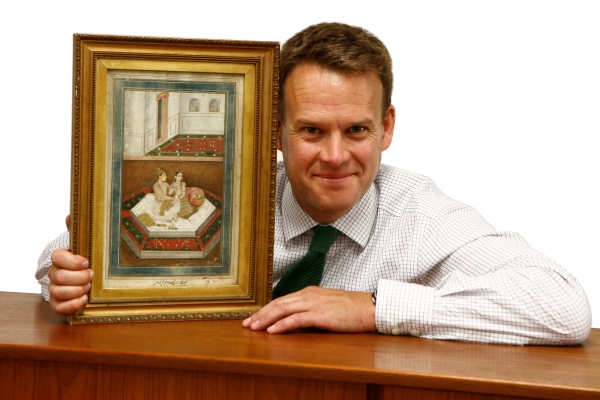 A letter dated 18th July 1846 written in the flowing hand of Robert Emlyn Lofft (1782-1847) of Troston Hall near Bury St Edmunds is pasted to the back of the frame. In it Lofft (1782-1847), a British Indian Army officer and collector of Arabic and Persian manuscripts, writes: I have the pleasure to send you a copy of a note from [Horace Hayman Wilson] the Librarian at the East India House to whom I sent a copy of the inscription on the picture I saw at your house. The inscription on your picture signifies ‘The Portrait of Shahjehan in the time of his youth, the work of the painter Goverdhan.’ The artist is considered one of the leading Mughal royal painters of the first half of the 17th century with this picture dated on stylistic ground to the 1630s.

The identity of the royal sitters is unclear. Based on the inscription Lofft believed the scene of a prince seated with his consort in a palace chamber to represent the betrothal of the youthful Shah Jahan to Mumtaz Mahal c.1607-8. It is conceivable that this painting was, like the Taj Mahal mausoleum, produced as a retrospective celebration of their loving union.
However, an alternative theory is that the prince is Dara Shikoh, Shah Jahan’s favourite son who, born in 1615, would have been aged 15 or thereabouts when this picture was painted.
Sworders director John Black described the miniature as the “perfect storm” of subject matter, artistic skill and provenance. “There are others in museum collections, but for a Mughal miniature with this sort of back story to turn up outside London or New York is extremely unusual.”

Further entries of Indian Works of Art are invited until Friday 20 October.