We are proud to open our April 5 Modern & Contemporary Art sale with an extensive group of works by East Anglian artists from Benton End, Suffolk and Great Bardfield, Essex. These two communities of creative minds were located roughly fifty miles from each other, and both came into fruition in the mid-1930s, surviving as artistic hubs until the 1970s.

There is a romance to the early years of the Great Bardfield community, as Edward Bawden and his great friend, Eric Ravilious, discovered the village while cycling one summer. They craved its peace and serenity in comparison to London and soon after moved to ‘The Brick House’ with their wives Charlotte Epton and Tirzah Garwood, who were also artists. Their presence in the village encouraged the arrival of other artists, such as John Aldridge (lots 3-5). 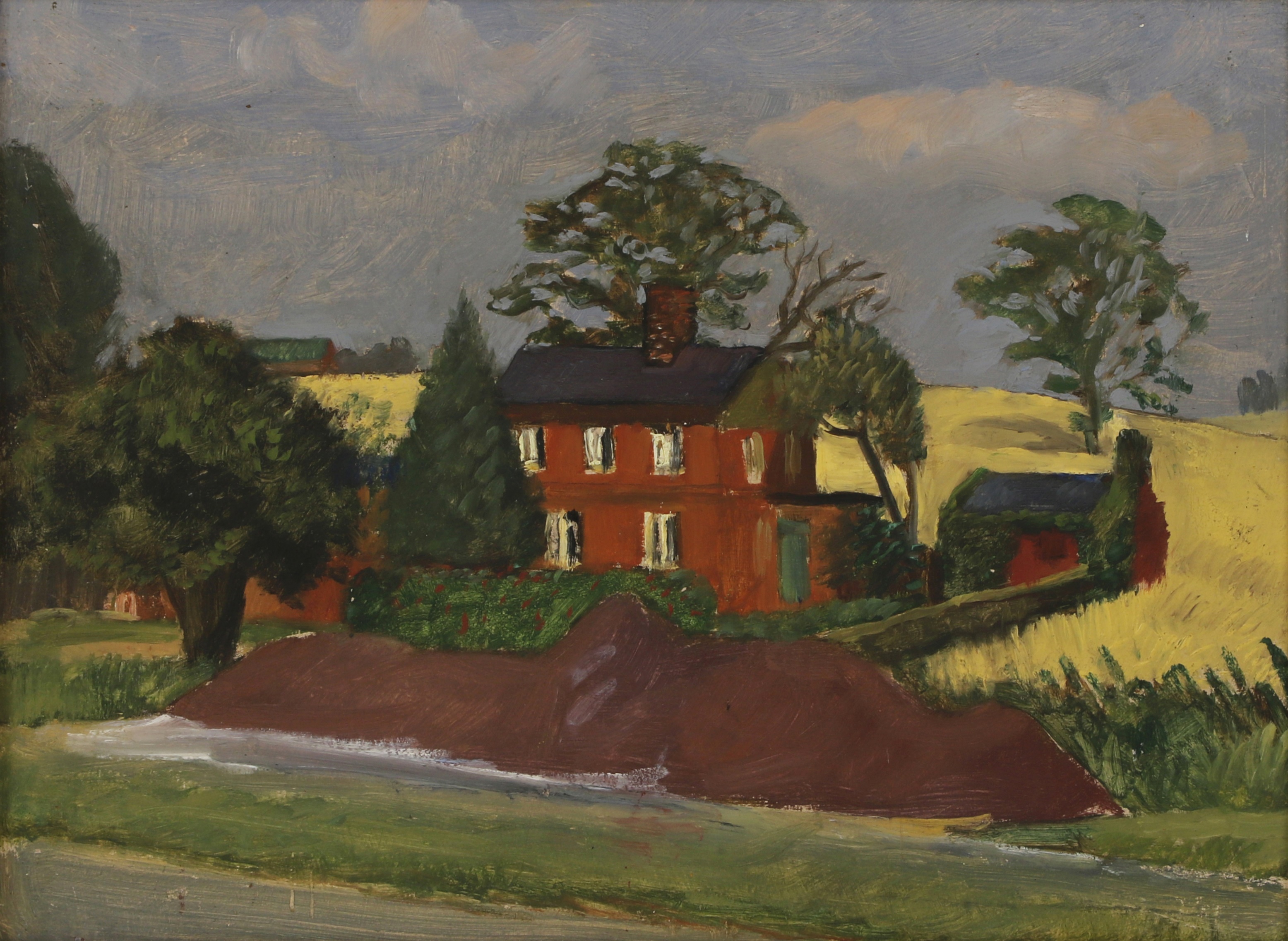 The Second World War caused great disruption and loss, the death of Ravilious in 1942 particularly affected Bawden. However, he returned after the war and continued to work in Great Bardfield. Sworders are pleased to offer two striking linocuts showing Ives Farm in the village. Lot 1 gives us a glimpse of the working day but in Bawden’s distinctive style. Here we see the farmer, cattle and birds, brought to life by bright colours and strong lines. Ives Farm backed on to Brick House, and so the artist was able to study the subject matter at his leisure.

He also captured the front of the farmhouse in ‘The Road to Thaxted’ (Lot 2). Here we see a woman peering out of the window at a policeman on a bicycle. At first it appears that he is approaching her property, but as the title suggests, he is in fact riding by along the Thaxted Road back into Great Bardfield.

Both works were initially executed circa 1956 but Lot 2, was printed a little later in 1960. This rare impression, unlike the earlier editions, shows more vibrant colours. Noticeably with the orange door which has been replaced by a vivid yellow, perhaps suggesting a change in his style as he moved into a new decade. Edward Bawden can be considered as the ‘master of the linocut’. He used this technique throughout his career not just for limited edition prints but also for posters, wallpaper, murals and book illustrations.

Just across the border in Suffolk ‘The East Anglian School of Painting and Drawing’ was in its prime. Founded by Cedric Morris and Arthur Lett-Haines, the school was initially located at Pound Farm in Dedham, but a catastrophic fire destroyed the school and it relocated to Benton End. Morris was an exceptional breeder of irises and the gardens at Benton End were famed for their beauty. We are particularly pleased to be offering a watercolour by Lett-Haines depicting the gardens at Benton End (lot 9).

The school offered students a less formal art education and one based in observation of the outside world. It was an immersive experience and students helped with cooking, cleaning, and gardening. There were large dinners every night and heated, intellectual discussion. An increasing study of Cedric Morris, in combination with rising auction prices, has raised the profile of the East Anglian School and its students. On offer in this sale are more than twenty works by Benton End artists, including paintings by Lucy Harwood, Joan Warburton, Denise Broadley, Waverney Frederick and Paul Earee.

Learn all about Eric Ravillious’ ceramic creations and the lasting influence he has had on his followers in this delightful blog by artist Angie Lewin, as published on inigo.com

A Talking Point: my old china – Angie Lewin on the wonders of Eric Ravilious’ Wedgwood wares

Our auction of Modern & Contemporary Art commences at 10 am on Tuesday 5 April.