Items From The Guardian’s Design Correspondent Come To Auction

Our Design sale on 4-5 May includes a group of Arts & Crafts items from the estate of the design writer and biographer Fiona MacCarthy OBE (1940-2020). Married to the Sheffield-based silversmith and designer David Mellor (1930-2009), who she first met when conducting an interview in 1967, MacCarthy’s background as a journalist for House and Garden and the Guardian helped to lay the foundations for seminal works on C R Ashbee, the Omega Workshops, William Morris, Eric Gill, and Stanley Spencer.

Involved across the arts, MacCarthy curated important exhibitions on British design such as Homespun to High-speed: British Design 1860 to 1960 at Sheffield Museums and Art Galleries (1979); The Omega Workshops 1913-19: Decorative Arts of Bloomsbury for the Crafts Council (1984), Eye for Industry: Royal Designers for Industry at the Victoria and Albert Museum in 1986, and Anarchy and Beauty: William Morris and his Legacy at the National Portrait Gallery in 2014.

MacCarthy and Mellor’s love of the Arts & Crafts is evident in the sixteen lots at Sworders. Alongside kilims and handwoven rugs is oak furniture by leading practitioners of the movement. Two Gordon Russell 'Stow' oak four-drawer chests carry labels for the Russell Workshops at Broadway in Worcestershire. Fashioned in the 1920s following a classic Russell design (number 609), they were made by the workshop carpenter SG Gilbert using English oak and laburnum for the carved handles.

They are expected to sell for between £3,000-5,000 each, as is a Gordon Russell, English oak, two-part cabinet and chest with four drawers and panelled cupboards. This piece, with the design number X113, was a special order and a unique commission, the purchaser being a Mrs Laws according to records held at the Gordon Russell Museum. 'Special orders' such as this started in 1929 with this piece dated to 18 May 1929.

Two Heal and Son oak-panelled wardrobes, to a design by Sir Ambrose Heal with heart-shaped escutcheons, are estimated at £1,000-2,000 each, while a rare oak sideboard designed by Sir Frank Brangwyn in 1926 is estimated at £6,000-10,000. It is on the market for the first time in more than forty-five years, having been purchased by the couple from Sotheby's Belgravia in 1976. 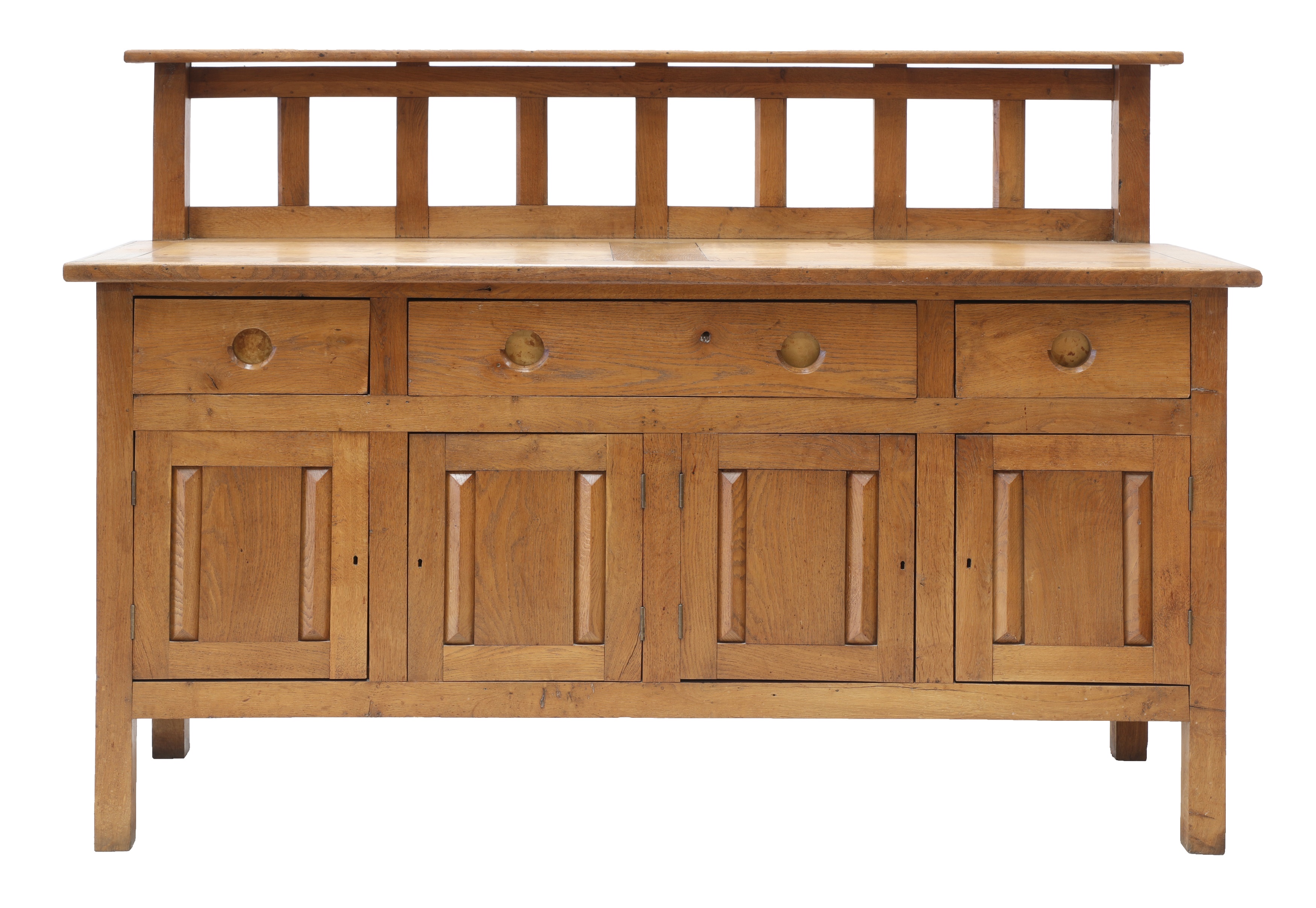 Brangwyn, who was taken under the wing of William Morris early in his career and worked with Siegfried Bing at the Maison l’Art Nouveau in Paris, is best known as an artist. However, across his prolific career he created an estimated 10,000 works in a range of mediums, including textiles, pottery, glass, and furniture. He wrote in 1934, ‘An artist’s function is everything: he must be able to turn his hand to everything, for his mission is to decorate life…he should be able to make pots and pans, doors and walls, monuments or cathedrals, carve, paint, and do everything asked of him'. The design of the sideboard is very much in the Arts & Crafts style - of simplicity and function. The raised back is cut for sighting plates, the drawer handles are fret cut with a chamfer to the base, while the cupboards and sides are simply emphasised with carved details flanking a plain panel.

Take a look at the full collection in the online catalogue for our DESIGN sale, to be held over two days on Tuesday 4 & Wednesday 5 May.