Our auction of Fine Jewellery and Watches on Tuesday 30 November includes items of Roman, Byzantine and Russian interest from the residual stock of Iconastas. The Piccadilly Arcade Gallery was established by Chris Martin-Zakheim and John Gaze in 1974, specialising in Russian Icons, works of art, and antiquities, until it closed its doors in 2018, having cemented a reputation as one of the industry’s leading specialists.

Ancient Rome is steeped in a history famed for its complex jewellery designs, inspired by the marrying of cultures and created from the natural resources that were available across the conquered Mediterranean territories and an extensive trade network of imported materials. Despite the sheer scale of the Roman civilisation, archaeological finds of Roman jewellery are relatively rare, and pieces in excellent condition such as the examples in our forthcoming sale are few and far between.

The sale on Tuesday 30 November includes a fine offering of Roman intaglios. Historically, intaglios were carved from hard stones such as amethyst, agate, garnet, jasper and cornelian, and used as wax seals. The difficulty associated with the carving of the stone meant they were reserved for prominent individuals, each having their own unique design to identify and differentiate stamped letters. The more complex the carving, the more difficult it was to forge the seal, thus making intricate designs all the more desirable.

Observing the fine detail achieved in the design of this hollow gold hardstone intaglio ring, dating possibly to the 3rd century, engraved with the head of a bearded gentleman wearing a headdress (lot 4 in the forthcoming sale), we clearly see the craftsmanship involved. The head measures just over 19mm wide and carries an estimate of £800-1,200.

Byzantine jewellery was a full continuation of the Roman traditions. In the Byzantine Empire jewellery played an important role – used as a diplomatic tool and to express status. The iridescent glass panels of this high carat gold reliquary cross, makes this a particularly striking example. Lot 16 in the forthcoming sale measuring 53 x 34mm, it carries an estimate of £800 - £1,200. Throughout the centuries, crosses of this kind were made to hold a secondary relic within them (a lock of hair or a piece of clothing, for example), offering protection to the wearer. 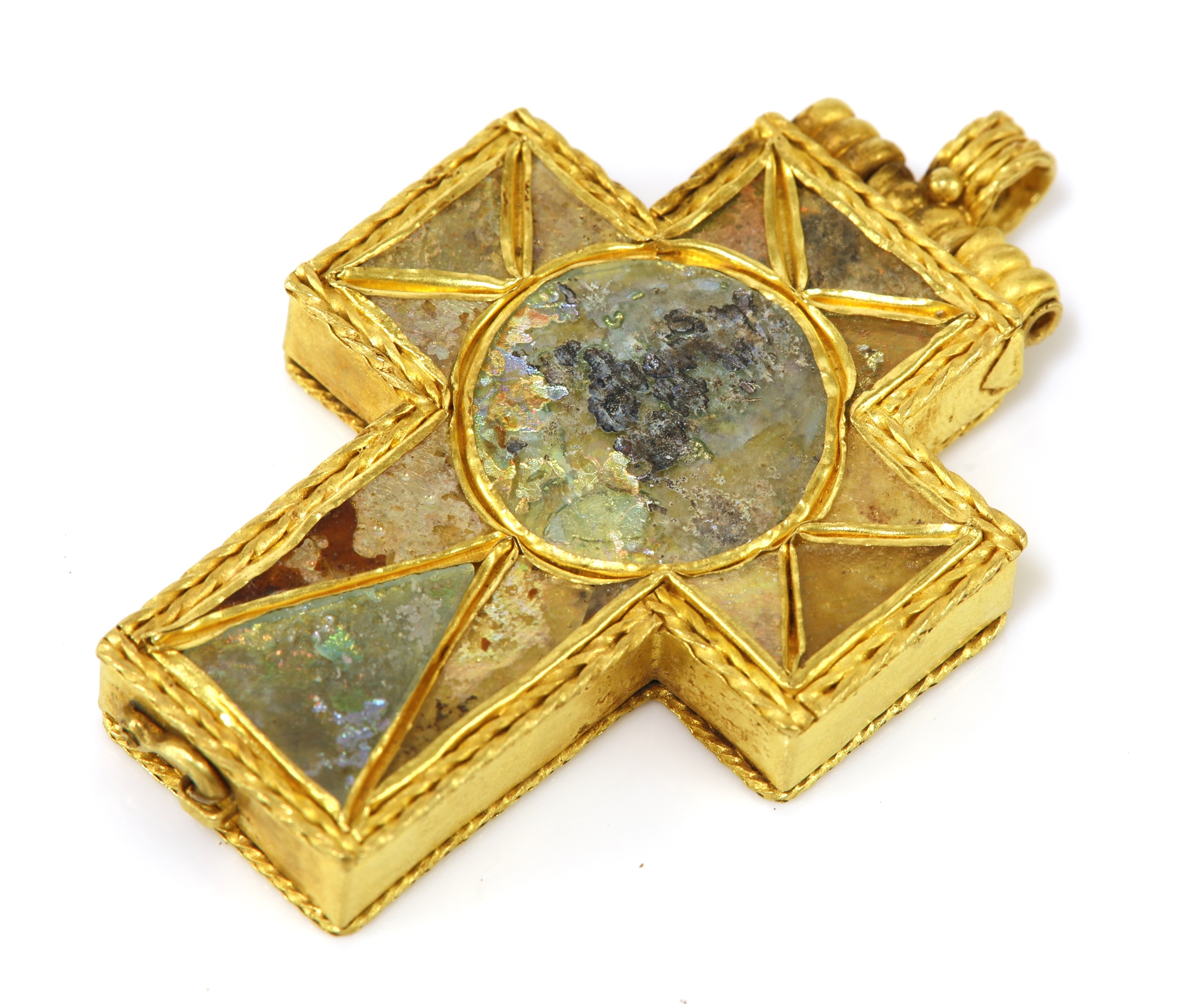 Lot 16 | A high carat gold Byzantine, Latin form reliquary cross,
inlaid with iridescent glass panels. The centre of the cross inlaid with an iridescent circular glass panel in greens and yellows. Similar triangular glass panel between gold frames, with a two row twisted wire border, hinged at the top to a five row bale with a hook clasp at the base. Tested as approximately 18-20ct gold. 53 x 34mm, 16.52g

Originating from Russia and demonstrating Eastern Europe’s signature style of elaborate and colourful enamel ware, is this gold icon pendant, depicting Christ Pantocrator (usually translated as “Almighty” or “All Powerful”) in polychrome enamel (lot 15 in the sale). Measuring 35mm in diameter (not including bale), it carries an estimate of £500 -700. 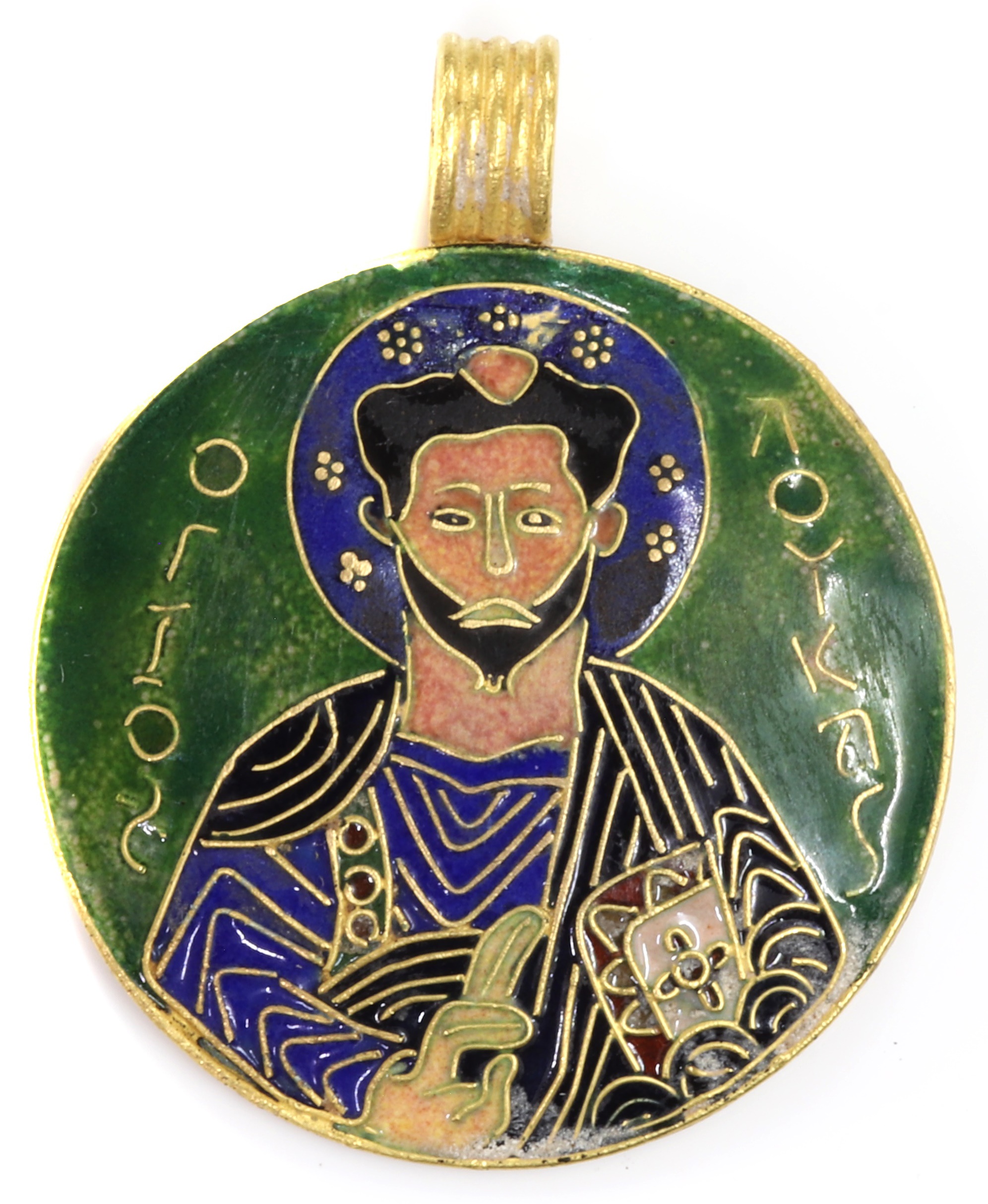 Amongst these examples are many more items of interest, including Russian art nouveau brooches, vesta cases, cameos and Byzantine pendants.

A consequent sale of Iconastas stock, including icons dating from the 14th to 20th centuries, soviet porcelain, works of art and propaganda, as well as icons from the personal collection of the late Chris Martin-Zakheim, takes place at our Stansted Mountfitchet Auction rooms on Wednesday 1 December.