The 10 x 12cm watercolour study of feathers inscribed in pen 'Drawn by Miss Biffin, 6th August 1812’ is being sold together with a Georgian handbill advertising her as an attraction 'During The Races’. 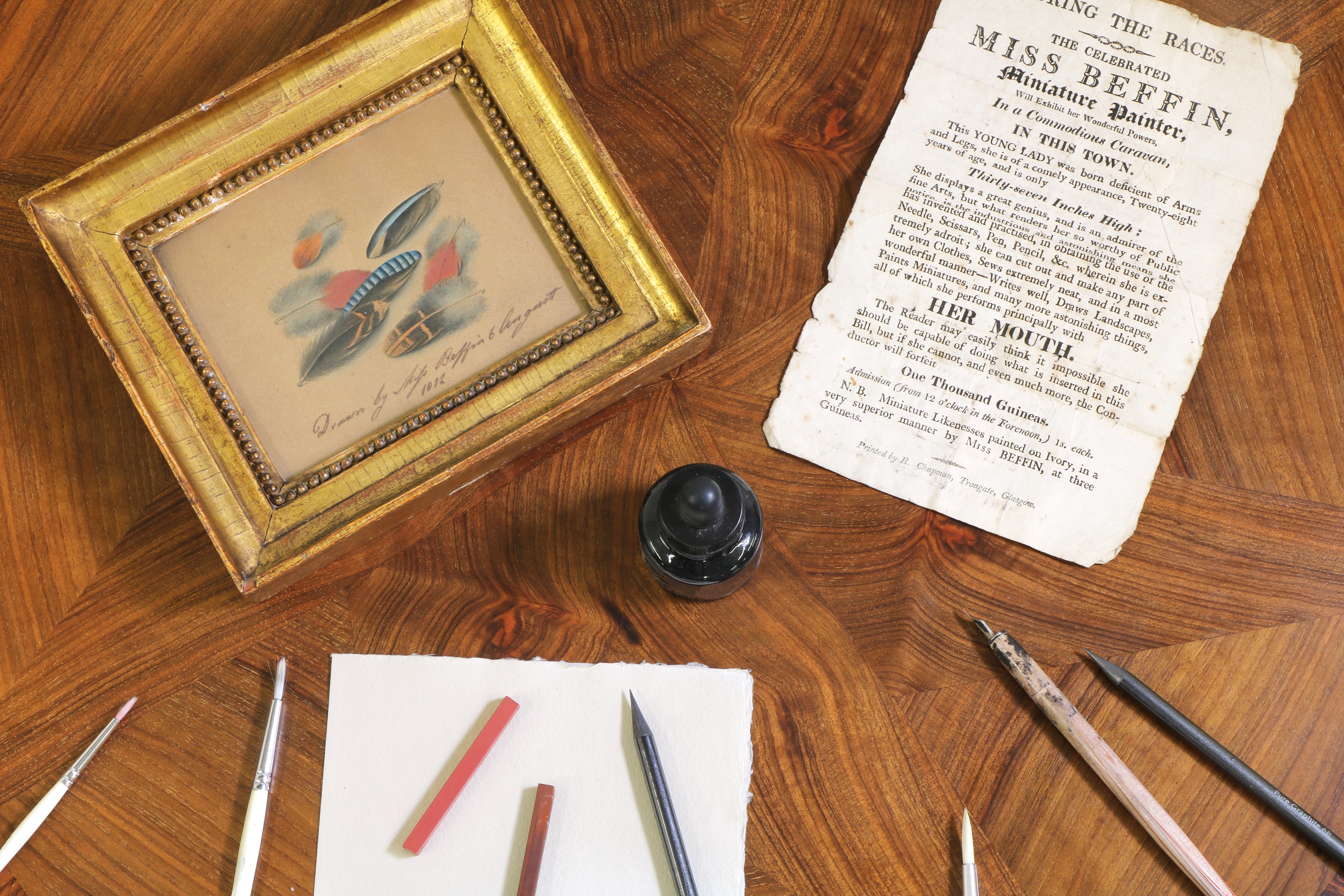 Sarah Biffin (1784-1850),
Study of feathers, inscribed in pen 'Drawn by Miss Biffin, 6th August 1812', watercolour,
10.3 x 12cm,
together with a handbill advertising her as an attraction 'During The Races' describing her as 'born deficient of arms and legs, she is of comely appearance, twenty-eight years of age, and is only thirty-seven inches high'

Born in Somerset with the congenital deformity phocomelia, Biffin (1784-1850) (also known by 'Biffen' and 'Beffin') taught herself to write, paint and hold scissors using her mouth. From the age of about 13, she earned £5 a year touring the country as part of Emmanuel Dukes’ travelling show. However, at St Bartholomew’s Fair in 1808 she was introduced to William, 16th Earl of Morton, an encounter that led to professional training, aristocratic patronage, and ultimately recognition by The Society of Arts and the Royal Academy.

Biffin’s story of talent and triumph over adversity is slowly becoming better known. As she has come to greater prominence the market for her work has taken off, a self-portrait selling for a multi-estimate £110,000 at Sotheby’s in December 2019. Her still lifes of colourful bird feathers, rendered in the most realistic way, display the full extent of her extraordinary talent. A similar work to that consigned to the December sale, albeit with twice the number of feathers, sold earlier this year for £52,000.

The picture comes for sale from the collection of the late Peter Crofts (1924-2001), a Wisbech, Cambridgeshire antique dealer, for whom it doubtless had particular resonance.

When, aged 20, Crofts was training as a pilot in Florida in 1945, the engine of his Corsair F4U burst into flames leaving him seriously injured. Both his legs were amputated and he spent three and a half years hospitalised. Under the guidance of the Stamford dealer Major Bernard Edinburgh, he became an antique dealer, and by 1958, was elected a member of the British Antique Dealers Association. Despite his disability, he was a keen sailor, owning an 88-year-old clinker-built Norfolk beach boat.

More than 100 lots from the Crofts collection will be offered as part of the Fine Interiors sale on 14-15 December.