Like most artists from the 20th century British avant-garde, Cedric Morris (1889-1982) has had his fashionable ups and downs but he is currently riding the crest of a wave.

Like most artists from the 20th century British avant-garde, Cedric Morris (1889-1982) has had his fashionable ups and downs but he is currently riding the crest of a wave. Unique as both a painter and horticulturalist of equal stature, he has been the subject of two recent London exhibitions - Cedric Morris: Artist Plantsman at the Garden Museum and Cedric Morris: Beyond the Garden Wall at the Philip Mould & Company gallery - and a third at Gainsborough’s House in Sudbury marking a recent bequest of 100 Morris works.

Prices in the auction room have been equally strong. A 1934 oil Easter Bouquet - the quintessential Morris flower painting in his distinctive post-Impressionist style - took £49,000 at Sworders in April 2016, an artist’s record that has subsequently been bettered.

The precise location of the Suffolk landscape (estimate £20,000-30,000) to be offered in our Modern British Art auction on Wednesday 11 July is unidentified (answers on a postcard please!) but it is signed and dated 1929 - a key moment in the artist’s career.

Early in 1929, Morris and lifelong partner Arthur Lett-Haines had chosen the country life over a London studio and taken the lease on Pound Farm in the village of Hingham. This first Suffolk home, with its spectacular gardens and parties to match, would prove a hub of artistic activity with visitors including Frances Hodgkins, Barbara Hepworth and John Skeaping. In 1937 the pair founded the influential East Anglian School of Painting and Drawing, first in Dedham and later at Benton End House, a rambling 'Suffolk pink' farmhouse on the outskirts of Haleigh that gave rise to the Benton End Group of painters. 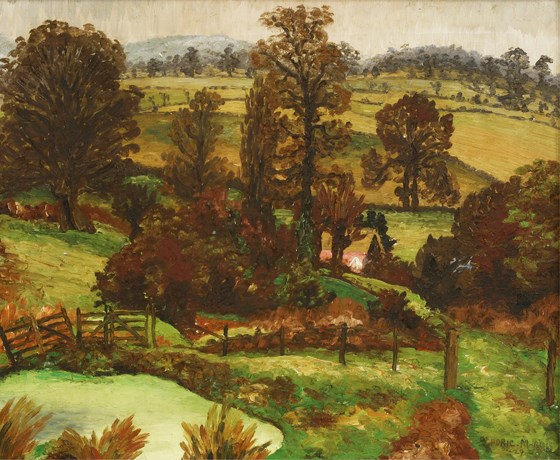 Can you help to identify the location of this Suffolk landscape, as painted by Cedric Morris in 1929?

Like Morris’ reputation, Sworders’ picture department has grown in recent years from one specialist and a consultant, to a team of four. Working closely with the Fry Art Gallery and other local institutions, we have developed a reputation as the place to sell East Anglian art and in particular the works of the Great Bardfield and Benton End groups.