After the landmark North Mymms sale which totalled a house record of £1.75million last week, Sworders witnessed another big hitter on April 25 when a 17th century painting of hunting dogs sold for £61,000 plus buyer’s premium.

The oil on canvas, probably Dutch and a painting of considerable quality, was dated 1648 and appeared to be signed ‘Horn', though it had not been possible to establish who the artist was. Jane Oakley, specialist in charge of the inaugural Sporting Art sale at Sworders said: “Dog paintings of this period don’t come onto the market very often so it drew a lot of attention from the trade and also private buyers. Coupled with the added ingredients of being fresh to the market from a local private source, we expected it would do well. We had about four telephone bidders at the start, two of whom dropped out around £8,000-9,000. The remaining two fought vigorously up to the final bid of £61,000." London dealers Tomasso Brothers were the buyers. 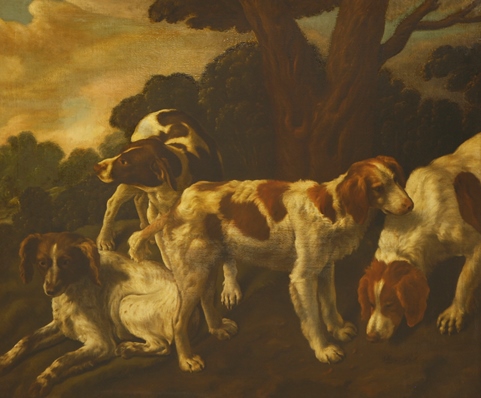 Jane Oakley said the sale - the first in this format - received good interest and lots of very positive comments from clients. "The format of having different sections for different types of pictures – sporting, dogs, birds, wildlife – worked well and each section yielded some strong prices.”

London folk art dealer Robert Young was the buyer of a pair of unframed oils of the prize-winning homing pigeons ‘Forecast' and ‘Blue Cock Bill’ by Edward Henry Windred (1877-1957). Each, signed and dated 1927 and 1928, included a record of their triumphs in a series of long-distance races.