Book Signed by The Beatles Comes For Sale

The notebook includes the signatures of three of The Beatles, together with those of Gerry & The Pacemakers, The Dave Clark Five, Cliff Richard, and Helen Shapiro. It is expected to make £800-1,200 as part of the Design auction on 19-20 October.

The vendor, ‘Sue’, was one of three classmates at a North London grammar school, all born in the summer of 1949. She was aged between 13 and 15 when these autographs were collected.

“Originally I was a mad keen Cliff Richard fan. I had a life-size poster of him above my bed. I had found out his address in Winchmore Hill, waited on my own outside his house. When he came out I was overcome with shyness but fortunately, he signed my outstretched autograph book and went on his way”.

With the arrival of the Merseyside bands, her head was turned.

“Once we heard The Beatles and the other Liverpool groups, we were immediately hooked. Early in 1963 (January 12) we heard the boys were making a live Radio Luxembourg broadcast from the EMI studios at Manchester Square and realised that, with a bit of luck, we would see them as they came out. There were only a very few fans waiting there with us. The Beatles were very charming and happy to patiently sign autographs for us all, although my friend recalls John Lennon was not there because he was unwell, which is perhaps why his autograph is missing.”

By the time the band played at the Finsbury Park Astoria for a Christmas show that ran from 24 December 1963, until 11 January 1964, their popularity had soared. “It was far more of a scrum, but I managed to get Paul’s signature.”

Sue, who has recently emigrated, recalls that this was an era when the groups were very accessible. Some autographs were sourced when the three friends attended the BBC’s lunchtime pop show recorded live at the Playhouse Theatre in Charing Cross, while others were signed following a clandestine visit to a rehearsal of the Royal Variety Show. “I remember sneaking in through a stage door to the London Palladium (it used to have several back exits then) on a Sunday afternoon and sitting in the semi-darkened auditorium. I stayed there for a couple of hours watching some of the bands rehearsing for a Royal Variety Show.”

Sworders’ sale includes other good examples of rock and pop memorabilia. A set of glass tumblers by Joseph Lang & Co, each transfer printed with a member of the Fab Four, are guided at £400-600, while a copy of Yoko Ono's 1971 paperback Grapefruit', signed in blue ink by both John Lennon and Yoko Ono, is expected to bring £1000-1500.

A signed Rolling Stones EP, a 1964 Decca mono pressing of Bye Bye Johnny, Money, You Better Move On and Poison Ivy, signed to the reverse by Keith Richards, Bill Wyman, Mick Jagger and the late Charlie Watts has an estimate of £500-700. 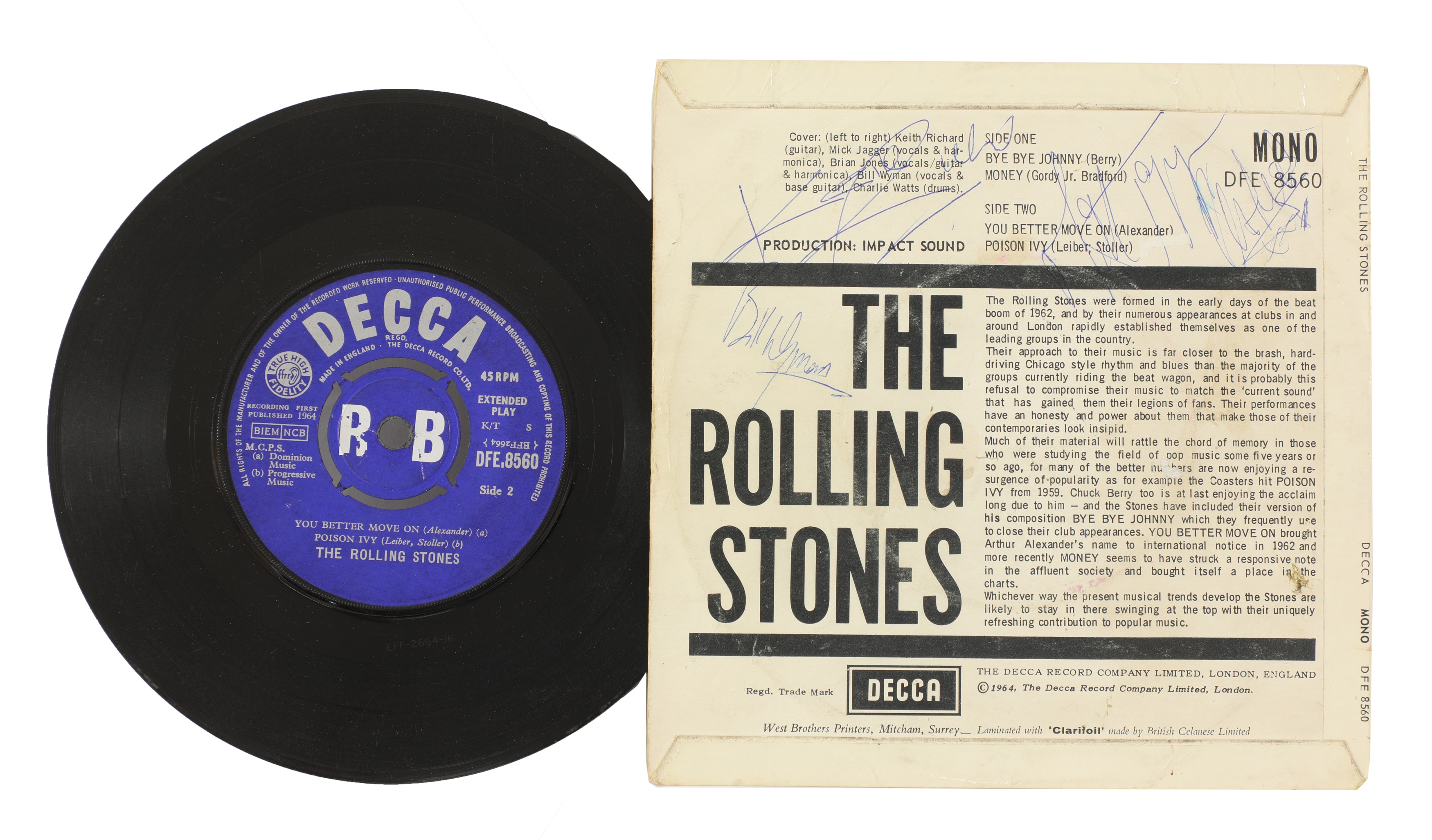