Painting attributed to a leading member of the Pre-Raphaelite Brotherhood to be auctioned by Sworders Fine Art.

Ford Madox Brown (16 April 1821 – 6 October 1893) was a French-born British painter of moral and historical subjects. The son of a retired ship's purser, he spent his early life on the Continent. In 1848 he met fellow artist Dante Gabriel Rossetti and through him became part of the Pre-Raphaelite circle. The name ‘Pre-Raphaelite Brotherhood’ referred to the groups’ opposition to the Royal Academy’s promotion of the Renaissance master Raphael.

He was initially approached by Rossetti to be a teacher and mentor to the younger artists who greatly admired his work. Madox Brown trained in Europe at various schools including in Bruges, Antwerp, Ghent and later in Paris. He was well acquainted with the European academic tradition and developed a lush and romantic style.

The Holy Family displays many classical elements that refer back to the Old Masters in its composition and use of dark, rich colours. Yet, it is not so traditional that it doesn’t include small unique touches like the beautifully observed still life of the jug and apple to the lower right of the composition. Madox Brown has masterfully created a painting full of tenderness and warmth. Its subtle glowing light creates a feeling of intimacy; reverential in its treatment of the holy figures, yet the viewer is invited to enter the picture plain and join the family in silent prayer. 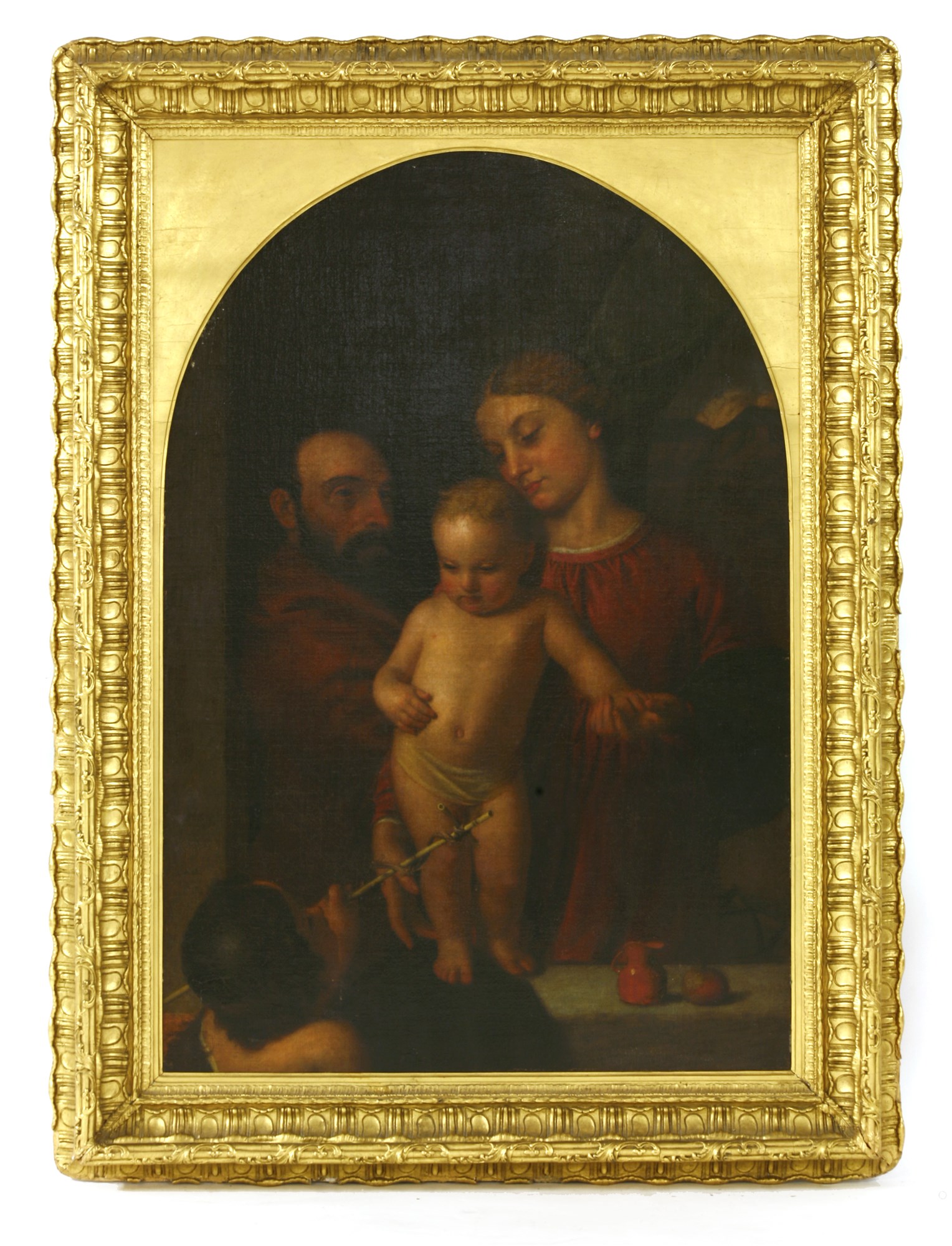 Henry Audesse’s spectacular collection of European fine art and furnishings, including The Holy Family, was offered for sale by U.S auctioneer John McInnes in 2016 in a multi-million dollar two-day sale, on the premises of the Audesse's magnificent thirty-room Georgian-style mansion at Wenham on Boston's north shore, Massachusetts, USA.

In a post-sale conversation with Nancy Audesse, Henry's wife, she told 'Antiques and The Arts Weekly' that the collection reflected her husband's tastes and interests, and his French heritage. 'The collection was his - he made the selections. My job was to make everything look good in the house.  We did most of the buying in New York, with two or three dealers who knew what we wanted, and we also bought locally when there was something that Henry wanted'.  Looking at the collection, it is clear that the French influence, style and connection was one of the greatest motivations in the acquisitions for the collection; the Russian items were demonstrably French in flavour.

Henry Audesse had made his fortune in the construction industry in the 1970s and 80s, when most of the collection was put together, although he continued collecting until late in life.  It is likely that he was attracted to the romantic style of French-born Ford Madox Brown as well as his French heritage.  Given the size and arched shape of the painting, it is probable that it was a commission for a church. The hiding of the monogram beneath the gold slip also suggests that in this instance, the artist was of no importance. Although he has left his mark, it was not necessary for the monogram to be visible to the observer.

Guy Schooling, Chairman at Sworders Fine Art comments ‘It is rare that a fresh work can be attributed with some confidence to a major member of The Pre-Raphaelite Brotherhood. Furthermore, although beautifully painted, the subject is now considered a little unfashionable. Therefore it carries an eminently modest auction estimate of just £8,000-12,000.

The work is to be offered at auction on Wednesday 5th December by Sworders Fine Art Auctioneers in Day Two of the Fine Interiors sale.