A rediscovered early landscape attributed to Lucian Freud, discovered beneath the layers of paint of another artist’s work, sells for £30,000 at Sworders Fine Art Auctioneers in Essex on Wednesday 11 July 2018.

A landscape painting discovered in the cellar of artist Elizabeth Bodman, who died in 2015, was assumed to be painted by her husband and fellow artist Tom Wright. But the back of the canvas was signed "Lucian".

Just before World War II, Tom Wright, an apprentice plasterer and pub sign painter in Hadleigh, Suffolk, was hanging a pub sign at The Shoulder of Mutton, in which the young Lucian Freud was drinking. Freud befriended him and persuaded him to join him at The East Anglian School of Painting & Drawing. Sir Cedric Morris waived Tom’s fees in lieu of his handyman skills.

Tom Wright is thought to have recycled Freud’s canvas for his painting, as they were in short supply.

Painstaking conservation work, in which the top layers of paint were removed chip by chip with a scalpel, revealed the work now attributed to Freud.

A media storm ensued, securing significant public interest in the lead up to the auction at Sworders Fine Art on Wednesday 11 July 2018. The winning bidder – a private collector in the UK - successfully competed on the telephone against one online bidder with the final hammer coming down at the high estimate of £30,000.

The family of Elizabeth Bodman, the estate from which the work was discovered, were following the sale closely and were thrilled with the result, being especially pleased to learn that the painting was to remain in the UK.

Sworders Chairman, Guy Schooling, comments “I am delighted that all of the hard work invested in recovering this rare early work has been rewarded”.

Further highlights in the sale included a Sir Cedric Morris (1889-1982) landscape, also found in the cellar of Elizabeth Wright née Bodman and being sold by her relatives. A Suffolk Landscape, Autumn, dates from 1929, the year Morris and partner Arthur Lett-Haines moved to the country and settled in Pound Farm in Dedham, Suffolk – the location where they later opened The East Anglian School of Painting & Drawing. The landscape sold for a mid-estimate £24,000 plus buyer’s premium. 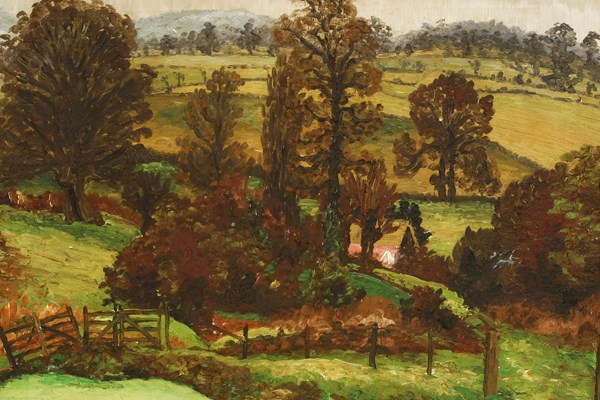 A Simon Bussy oil on canvas from the artist’s studio sale titled Bird of Paradise on a Branch, measuring just 39 x 33cm, sold for over double the high estimate at a hammer of £16,000 plus buyer’s premium at the fine art auctioneers in Stansted Mountficthet.