We are delighted to announce that a single owner collection of ten Russian icons, produced by artists in Moscow and St Petersburg in late 19th/early 20th century will be included in our Fine Interiors auction on 8-9 December. Here we discuss collection highlights, craft and execution, symbolism and the resurgence of interest in such pieces within the art market.

Russian Art Week was founded by RA+C in 2011. The event takes place twice a year in June and November and although our offices are currently closed to the public, we are thrilled to be able to contribute to the continuation of Russian art and culture this Autumn. Sworders are delighted to announce that a single owner collection of ten Russian icons, produced by artists in Moscow and St Petersburg in late 19th/early 20th century will be included in our Fine Interiors auction on 8-9 December, with estimates ranging from the low hundreds to thousands. 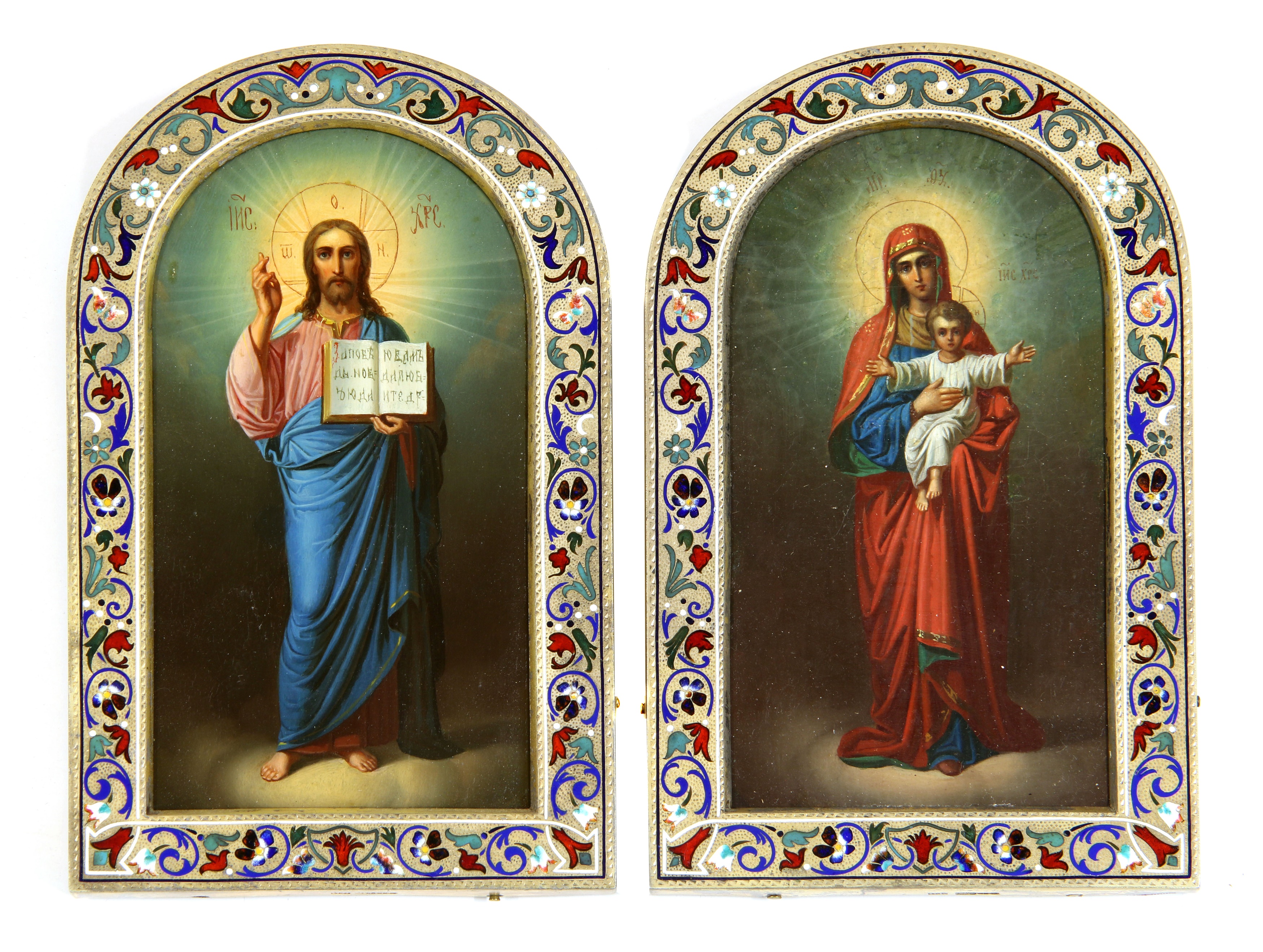 Highlights include a pair of framed silver gilt and enamel wedding icons depicting the Mother of God and Christ Pantocrator, with the makers mark of Cyrillic I.R., St Petersburg, 1896 and silver gilt travelling icon of Christ Pantocrator and chosen saints, with the maker’s mark BK, St. Petersburg, circa 1890. The triptych depicts Christ Pantocrator in a trefoil arched section surmounted by a cross, flanked by St Nicholas and the Guardian Angel in gilt frame with an inscription to the reverse cover  “From founders, council members and teachers of the first school of printing from St Petersburg on December 11, 1894”.

The Holy figures on these icons were beautifully executed, and the silversmiths and enamellers enhanced these images with their skillful embossing, chasing and repousse work. The coloured enamels were applied carefully in order to provide a respectful and visual effect. The decoration of the silver facade or oklad took pride of place for the craftsmen and women and their dedication to producing a venerable religious symbol was uppermost in their minds. 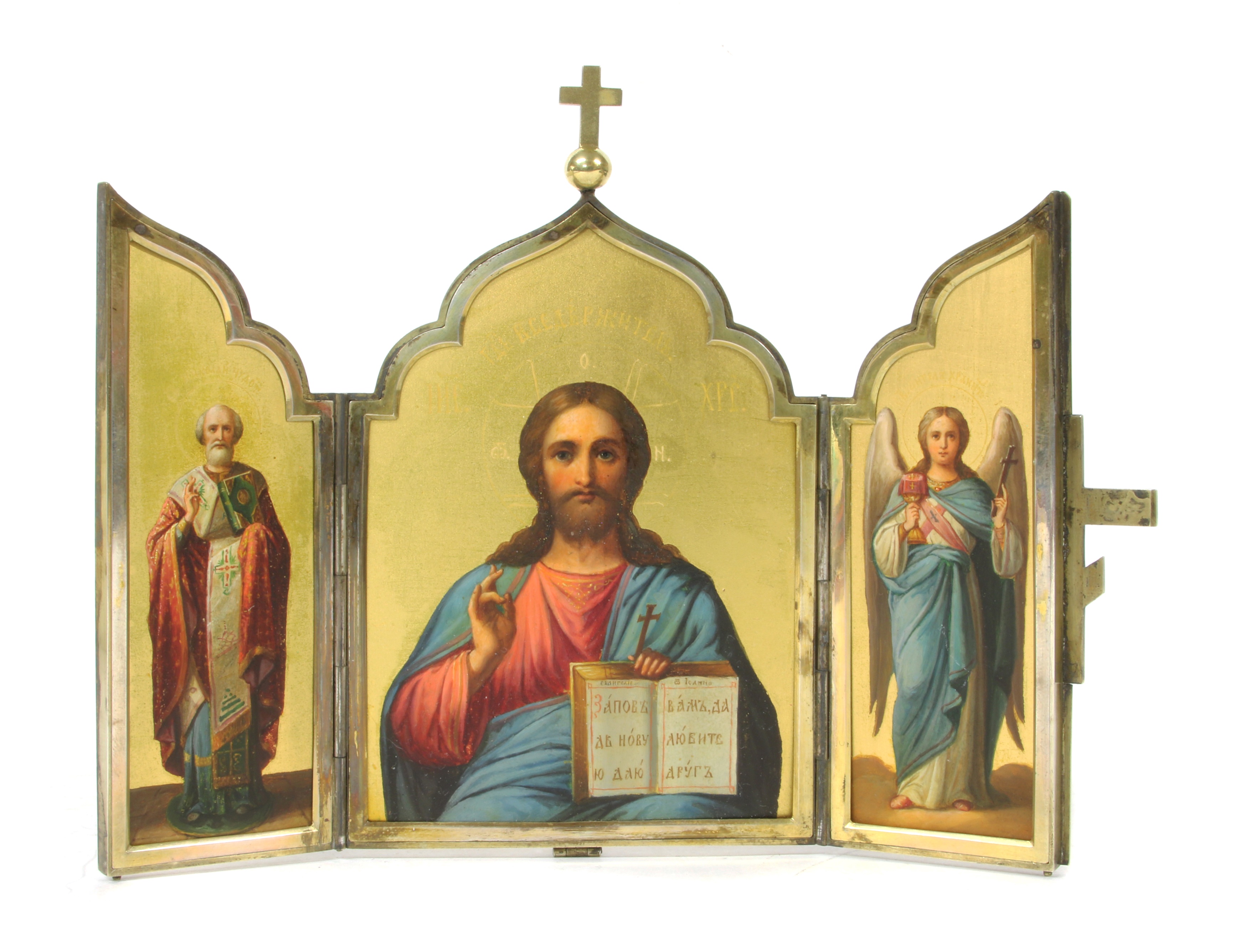 Original painted icons of this period are all the more sort after as the craft went into decline with the arrival of printed images, which were much cheaper to produce. Most icons were not signed, and the only clues we have to their origins, other than stylistic, are the silver maker’s initials and the date marks. They are all stamped ‘84’, the Russian Imperial standard.

In the period that these were created, the market expanded to include those collecting them as examples of Russian traditional art and culture. Interest waned in the Soviet period and many were lost or destroyed. There has been a resurgence of interest fuelled by the renewed fascination in the pre revolution era.

The Holy Visages used were usually based on much earlier traditional images. Collections of these icons can be seen forming icon screens or iconostasis, which separate the nave from the sanctuary in many Russian churches and also on show in museums such as the Kremlin, where there are over 3000.

Click here to find out more about our Fine Interiors Department

For more information about the collection please contact E | jamespickup@sworder.co.uk

A 'How To' Guide to Identifying and Buying Prints

Buying prints at auction is a great way to start an art collection. Prints are typically from limited editions, making them more affordable than one-off pieces such as oil paintings. Yet, the printmaking process is highly skilled, each plate onto which the artist creates an image needs to be perfect in order to achieve the desired finish. Eleanor Garthwaite tells us more...