Our consultant specialist Claire Grindey sheds light on how the Chinese cultural tradition has influenced English and European silver making from the 17th century onwards.

As we prepare for Asian Art in London, our consultant specialist Claire Grindey sheds light on how the Chinese cultural tradition has influenced English and European silver making from the 17th century onwards.

Many of us will have grown up with parents who owned Willow Pattern dinner and tea services, perhaps the most commonly found and best known example of Chinese influence on English design from the end of the 18th century.

But the influence of China runs far deeper in both English and European design from at least a century before, when London silversmiths, inspired by the complex geometric forms found in Chinese Yixing stonewares, translated them into teapots and associated wares. 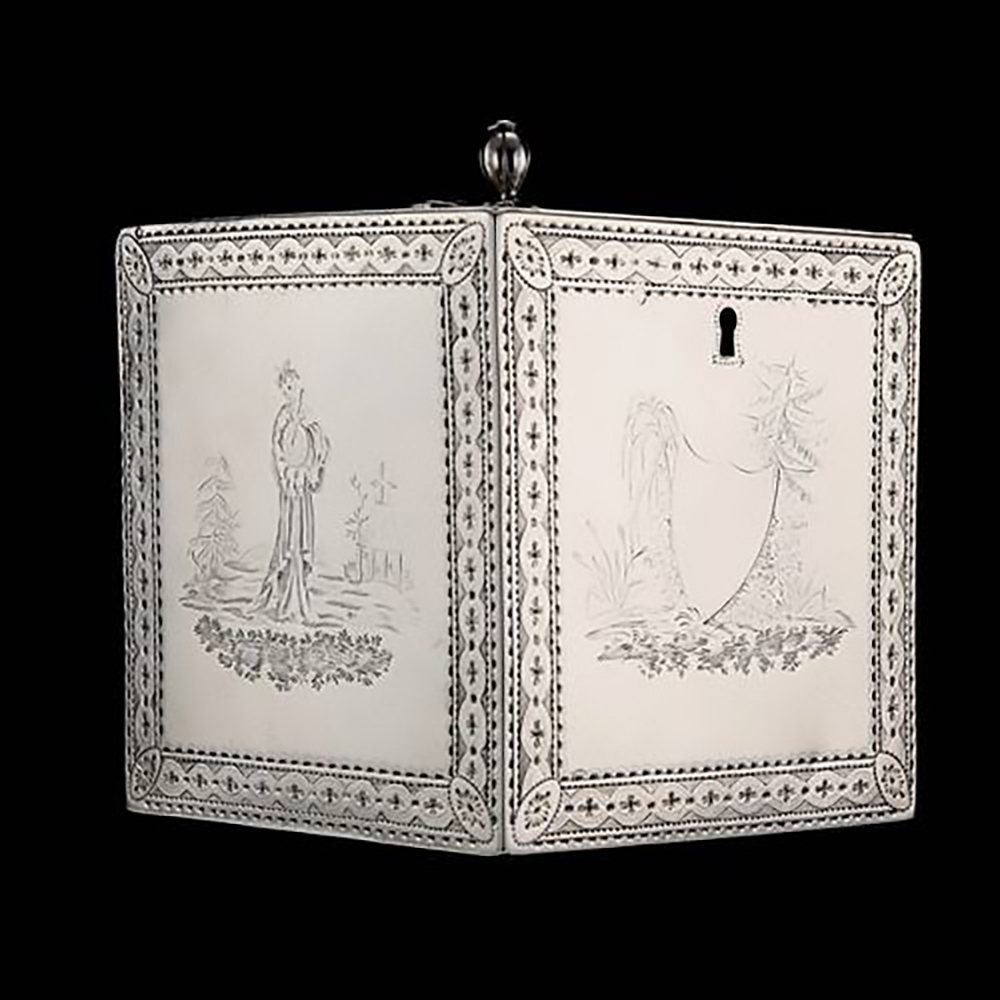 It is hardly surprising that it should be tea that bridged the cultural divide between East and West. What was to become the English national drink began life here as a luxury import, jealously guarded in caddies kept under lock and key by the mistress of the household. As a luxury item, it demanded objects of equal standing for its preparation and service, and where better to find inspiration for their design than from China itself, the Celestial Empire that would supply the British Empire with so much trade and wealth during the 18th and 19th centuries. Chinese porcelain with precious metal mounts can often be seen in the in still-life paintings of the 17th century, depicting luxury objects of wealthy households.

The sophistication of Chinese production methods – it wasn’t until 1709 that Johan Friedrich Bottger finally uncovered the secret of porcelain manufacture at Meissen – a commanding historic tradition that stretched back well beyond that of the West, and the beauty and exoticism of Chinese culture came together to create a powerful and heady influence on European imaginations. It spread into many corners of contemporary life and became even more popular and fashionable in the late 18th century when it captured the heart of the Prince Regent, who readily employed it at the Brighton Pavilion, making the Chinese interior very much à la mode and leading to the creation of Chinese Rooms in many an English country house. Such was the heir to the throne’s love of all things Chinese that it became the subject of satire, reaching its apogee in George Cruikshank’s 1816 cartoon The court at Brighton à la Chinese!! This colourful interior depicts the Prince as Chinese emperor, with his daughter proposing she be married off to a Chinaman. 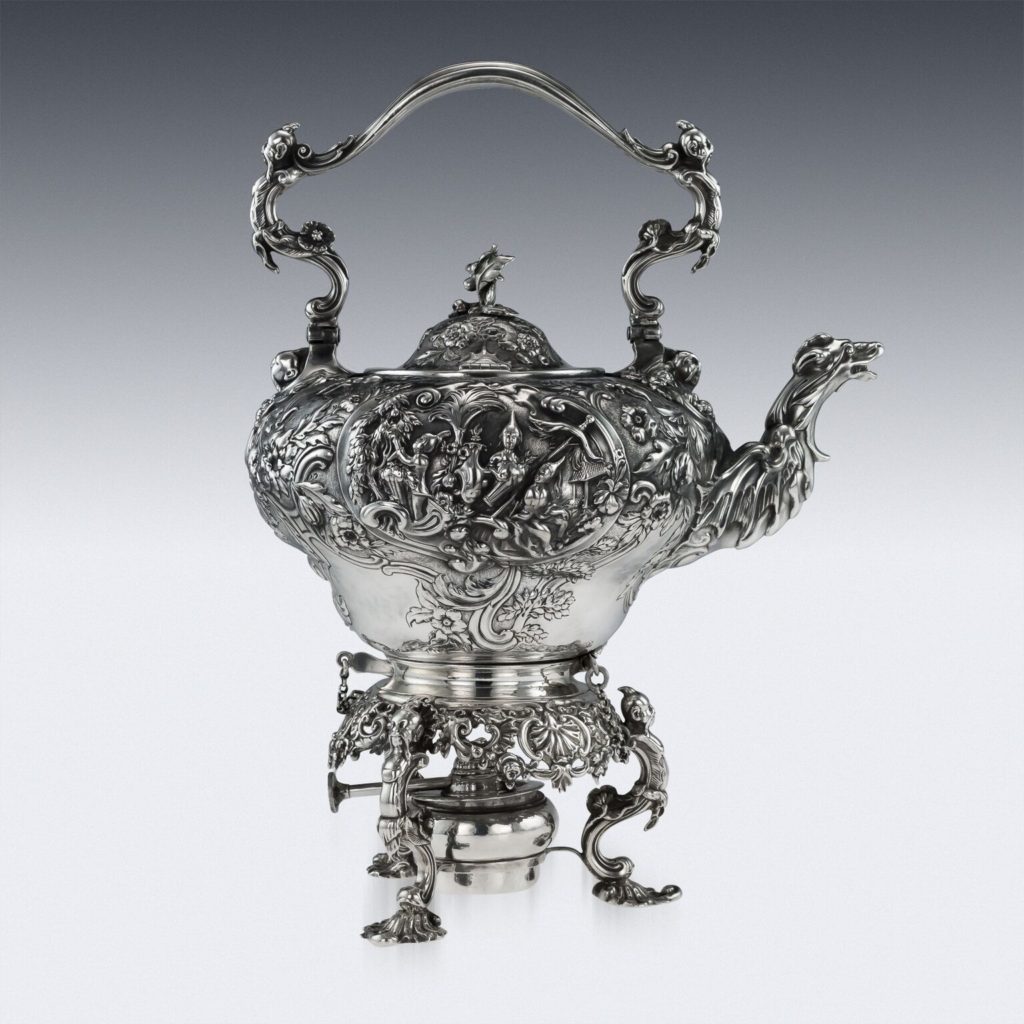 On a comparatively modest scale, when it came to silver, Chinese design ranged from cutlery to grander objects like the Willymot ginger jars, dating to around 1660-70, now to be found in the Ashmolean Museum in Oxford.

The recent sale of the latest tranche from the Bill Brown Collection in our Autumn Country House sale included naturalistic ivory-handled plant-like knives and forks derived from a Chinese design.

As Chris Hartop notes in his 2008 book Geometry and the Silversmith, Chinoiserie design also found inspiration in Asian lacquer, and it was interpreted directly, creating silver trays on bracket feet that in China would have been made out of lacquer.

Timing came into it as well. English taste in silver design towards the end of Charles II’s reign had become rather pedestrian and was in need of revitalization. It came at the hands of the Huguenots, given sanctuary from French oppression after 1670. Over the next 40 years nearly 50,000 of them crossed the Channel to seek a new life in England, bringing with them a wholly fresh and refined taste, leading to a new direction in style and form. Their greatest exponent, Paul de Lamerie, did much to promote the Rococo style, a close cousin of the asymmetry, rolling forms and fantasy confection to be found in Chinoiserie, which he also championed.

Silver Chinoiserie pieces are rare and the best examples are now in museums, notably the V&A. At the height of its fashion, Chinoiserie was a mixture of Japanese, Persian and Chinese design.

Chinoiserie as a mode of expression in design was to last a great deal longer, with the Victorian period witnessing a plethora of silver tea caddies and objects of vertu on a Chinese theme. Melon-shaped teapots were almost certainly inspired by Chinese wine pots seen by European travelers.

So as you scan the auction catalogues, tour the galleries and inspect the museum displays that all form part of the 2017 Asian Art in London festival, it is worth remembering that our fascination, wonder and appreciation of these items has its own long English tradition, which first paid tribute to the wonders of the Far East though those pioneers of silver design in the early 18th century.