To look at it’s fairly unimpressive, but this small blackened bone is worth thousands of pounds. Why? Because it is one of the rarest ever items ever to be offered at auction: a Dodo bone.

To look at it’s fairly unimpressive, but this small blackened bone is worth thousands of pounds. Why? Because it is one of the rarest ever items ever to be offered at auction: a Dodo bone.

It will be included it in our inaugural Out of the Ordinary sale on February 13, an auction with a catalogue full of the rare and mysterious, from witchcraft ephemera to this: what is thought to be only the third dodo bone to come to auction in 84 years.

Consigned by Errol Fuller, the well-known author on books about extinction, including Dodo from Extinction to Icon, it is conservatively estimated at £2000-3000. 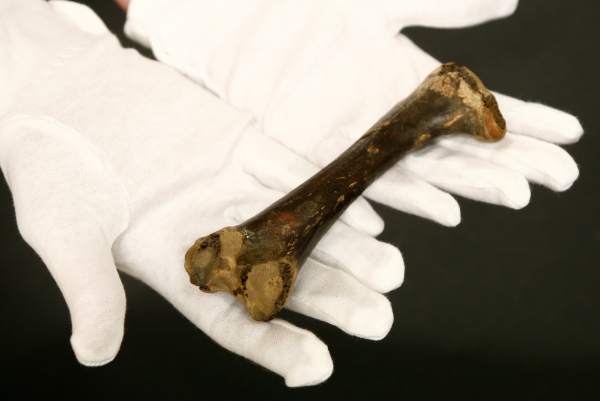 The dodo was first spotted by Dutch sailors on Mauritius in 1598. Hunted to extinction within 100 years, it has since become the symbol of all threatened species.

The bone comes from the Mare aux Songes swamp on Mauritius, the source of almost all dodo bones now in private and public collections, and would have lain there for around 400-500 years. Fuller attributes its black colour to the roots that encased it during its time in the swamp. Those not surrounded by plants have emerged brown in colour.

“In terms of importance and rarity, the dodo is one of the great icons of extinction,” says Fuller. “Perhaps not as important as a Tyrannosaurus Rex, but more so than anything else, little is known about it and only a few images survive – mostly 17th century Dutch paintings.”

He attributes our modern fascination with the elusive dodo to its appearance in Lewis Carroll’s Alice’s Adventures in Wonderland, in which Sir John Tenniel took his inspiration for the memorable drawings from the dodo head in the Ashmolean Museum.

The last Dodo bone to come up at auction was at Christie’s South Kensington London in April 2013, and that was just a fragment, which made £6500 hammer; prior to that there hadn’t been one on record as selling at auction since 1934.

In 2016, a near-complete skeleton, made up of composite bones gathered separately over nearly 50 years, sold for £280,000 at auction.

There are quite a few dodo bones in museums, but in private hands they are almost non-existent and, as Fuller reveals, all the models in museums are fakes, usually made with chicken feathers.

The dodo bone will appear in our inaugural Out of the Ordinary auction, a new type of sale masterminded by former Christie’s head of department Mark Wilkinson, who promises a wide range of curious and exotic items in the catalogue.