The Diaries Of A Lady...

A remarkable historical archive relating to a once famous Suffolk dynasty comes for sale at Sworders in Stansted Mountfitchet next month. The diaries, journals and letters of Lady Ann Cullum  (1807-1875) of Hardwick House near Bury St Edmunds...

A remarkable historical archive relating to a once famous Suffolk dynasty comes for sale at Sworders in Stansted Mountfitchet next month. The diaries, journals and letters of Lady Ann Cullum  (1807-1875) of Hardwick House near Bury St Edmunds - part of a Fine Interiors sale on September 10 & 11- come for sale from the collection of Rodney Whitworth of Walsham-le-Willows in Suffolk.

The daughter of John Flood of Farmley, Kilkenny, Miss Ann Lloyd was educated in England at Mrs Schnell’s School of Young Ladies. It was while on a Grand Tour with her Aunt Elizabeth in 1831 that she met the Reverend Sir Thomas Cullum (1777-1855), 8th Baronet of Hardwick.

Included in the sale are Ann’s leather-bound travel journals from the 1830s. They cover the trip she made as debutante to Naples, Oberland, Genoa, Munich and Dresden in 1830-31, a coach box tour of Italy, Germany, Switzerland and France as Lady Ann Cullum in 1833, further travels in Malta and Sicily in 1838-39 and a tour to Greece and Turkey in the spring of 1840. Most include engravings and sketches with the contents also transcribed onto typed pages. The journals for each of Lady Ann’s four sojourns are estimated at £300-500 each.

A large album consisting of around 160 mainly autograph letters sent to the Cullum family in the 18th and 19th centuries is pitched at £3,000-5,000. Royalty, statesmen, military leaders and men and women of letters, arts and science are among the correspondents. Highlights include eight letters to Lady Cullum from novelist William Makepeace Thackeray, 24 lines by the abolitionist William Wilberforce and notes from mathematician Charles Babbage (July 1864), geologist George Barrow (November 1851) and social commentator Thomas Carlyle (1847). Others come from the Duke of Cumberland’s son George - later George V, last king of Bavaria - who Ann had met while at Mrs Schnell’s School.

Lady Cullum's diaries in three volumes from 1854-65 (estimate £300-500) describe her meetings with many similar luminaries. Following regular meetings with the historical writer and poet Agnes Strickland while in London she waspishly observed: “Miss S is very prosy and always talking of herself and her books - she is an extraordinary looking woman, very well meaning but most tiresome companion. She has a high opinion of her celebrity which almost amounts to mania”. She enjoyed the Thackerays’ company more. In 1863 she wrote: “Dined at the Thackeray’s. Miss Thackeray and Lord Stanley very amusing. Thackeray was in high spirits… I settled down the presents with him at the back of his house. It is to be done when his novel is finished; his novels are his bank…' And finally on December 26, 1863 - “Shocked and grieved to hear of Thackeray’s sudden death”. 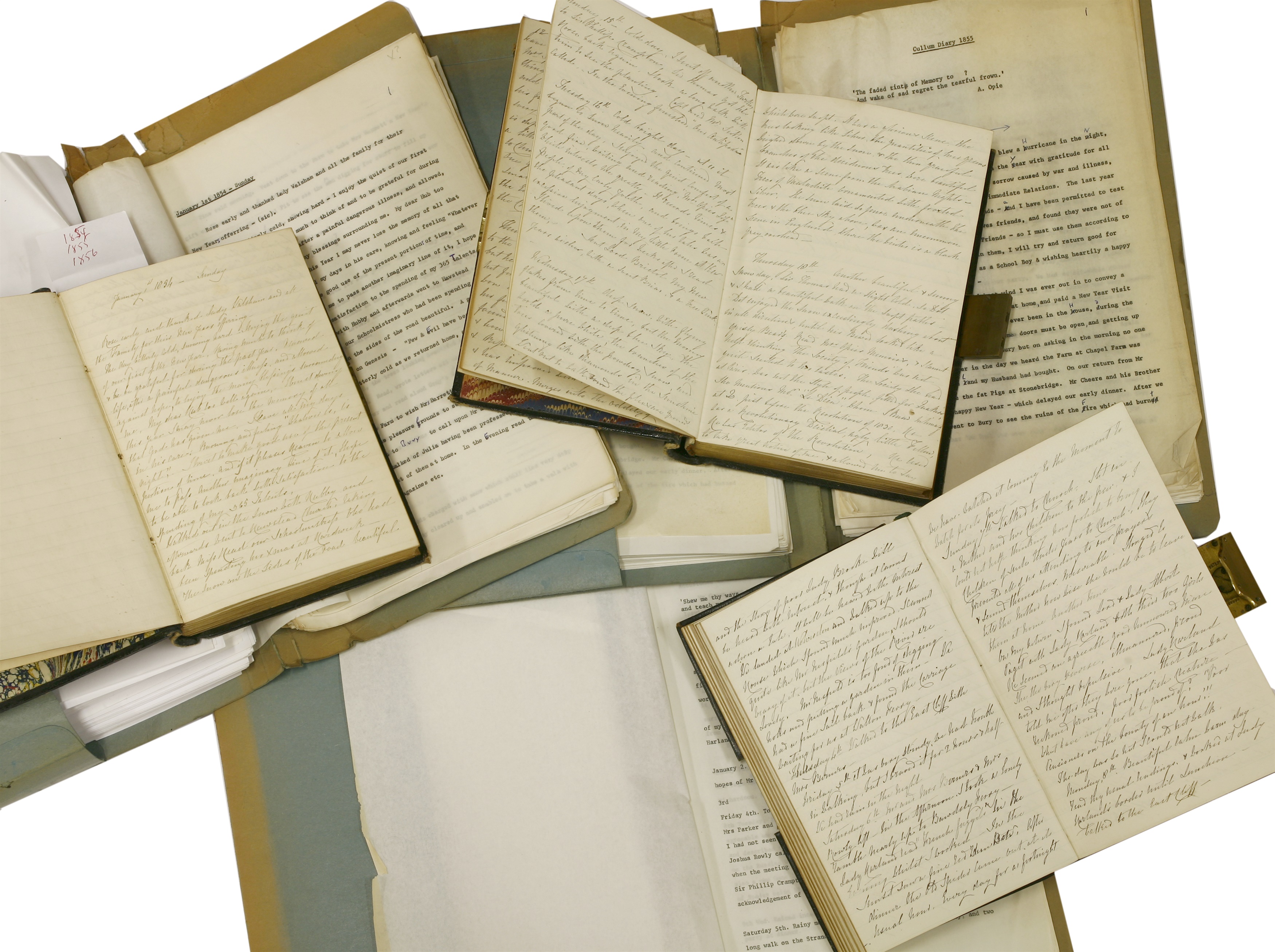 Lords of the manor of Hardwick, the Cullum family lived at Hardwick House for almost three centuries. Experts in Suffolk county history as well as noted authorities in antiquarian and botanical matters, the Cullum family of eight successive baronets authored works on the county and its fauna and flora.

Ultimately, the estate was sold during the Depression when the last family member died without direct heir with Hardwick dismantled for building materials in 1926.

What did the property look like? A family scrapbook of around 100 drawings and watercolours (estimate £800-1,200) provides the answer. Among many local scenes, including a panorama of Bury St Edmunds which local residents would still recognise today, is a view of Hardwick House and its gardens.