The Hunt Begins - Do you own one of the missing works by Eric Ravilious?

An appeal has been launched to locate approximately 40 missing priceless watercolours by Eric Ravilious, one of the most widely celebrated English artists of the 20th century and a great scion of the Bardfield and North West Essex group.

When archivists set out to create a complete catalogue raisonné of the works of Eric Ravilious, one of the most widely celebrated English artists of the 20th century and a great scion of the Bardfield and North West Essex group, it was discovered that almost 40 watercolours could not be accounted for.

An appeal has now been launched to try to locate the missing works, some of which could be worth up to £250,000.

Recent major retrospectives for Eric Ravilious at the Dulwich Picture Gallery and Pallant House Gallery in Chichester have played their part in raising new interest in the artist’s work, and our prediction that 2016 would see him take centre stage became a reality with hammer prices well exceeding estimate at our inaugural Modern British Art auction in April 2016. Most impressively with ‘The James' And 'The Foremost Prince’ which sold for a staggering £85,000. More information about this very talented artist can be found in our online directory - Eric Ravilious 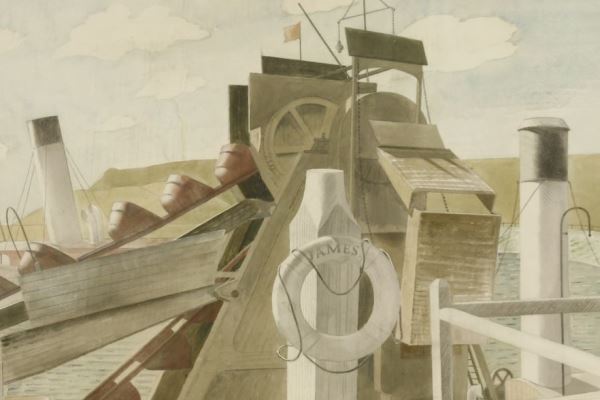 The catalogue raisonné is set to be published in 2019 by The Hedingham Press, formed by Gordon Cooke, James Russell and Robert Dalrymple. The three have made it their mission to find the lost works. Gordon Cooke states “I’ve been in the art business for over 40 years and in that period Ravilious has become more and more well known, so the likelihood is that people will recognise the name if they see it in the press”.

“There are all sorts of ways that pieces of art can vanish into obscurity. For instance, a person who clears a house after a family has moved might not know anything about art”.

Ravilious is believed to have died in 1942 after he went missing whilst flying with the RAF in a search-and-rescue mission whilst stationed in Iceland, though his body has never been found.

We at Sworders have particularly close ties with Ravilious and the other artists who resided in the  Great Bardfield area, which is less than 15 miles from our saleroom in Stansted Mountfitchet. Our continuous support of this very talented group of artists, and the success of sales of their works in our Modern British Art Auctions has contributed to the burgeoning interest in Ravilious. We shall be following this appeal closely.

If you think you are in possession of a lost Ravilious watercolour, please contact The Hedingham Press at ravilioscatalogue@gmail.com

Entries are invited for our Modern British & 20th Century Art Auction, to be held on Wednesday 11 July 2018 - closing date Friday 18 May. To discuss  potential consignments, please contact our Head of Paintings: