On Wednesday 5 December (Day Two of our Winter Fine Interiors auction) we will offer this set of three graduated Staffordshire pottery 'Irish Repeal' commemorative jugs from The Estate of Rodney Whitworth, The Priory, Walsham-le-Willows.

A set of three graduated Staffordshire pottery 'Irish Repeal' commemmorative jugs, c1830-40, each with two transfer printed panels, one side titled 'Ireland without the Repeal' depicting Daniel O'Connell addressing a crowd, opposite 'Ireland with the Repeal' depicting him riding in a carriage through a village with crowds celebrating, a horse with the 'Erin Go Bragh' flag flying from a chimney, 15, 18, 21.5cm high. Estimate £300-500.

The Repeal Association was an Irish political movement set up by Daniel O'Connell in 1830 to campaign for a repeal of the Acts of Union of 1800 between Great Britain and Ireland.The Association's aim was to revert Ireland to the constitutional position briefly achieved by Henry Grattan and his patriots in the 1780s, legislative independence under the British Crown, but this time with a full Catholic involvement that was now possible following the Act of Emancipation in 1829, supported by the electorate approved under the Reform Act of 1832. 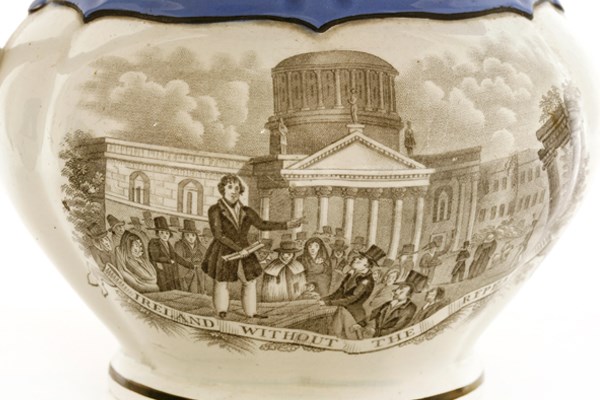