The Return of a True Blue

The late Margaret Thatcher was not just the iron lady. She was - as this recent consignment suggests - the blue lady too.

The late Margaret Thatcher was not just the iron lady. She was - as this recent consignment suggests - the blue lady too.

In 1981, in the run up to the Conservative Party Conference, Punch magazine ran a promotion. Free inside. Blue picture of Mrs T! it said. 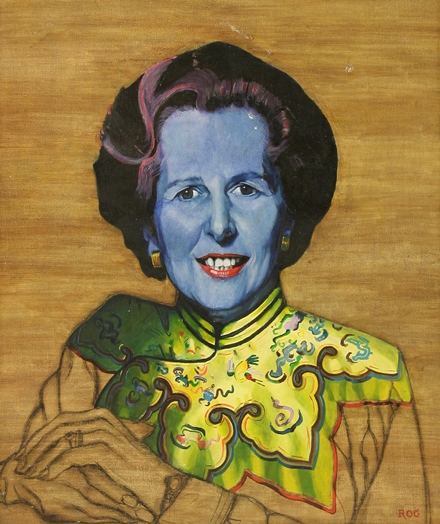 The picture was inspired by the 1952 work Chinese Girl (Green Lady) by naturalised South African artist Vladimir Tretchikoff (1913-2006). The image had been the world’s best-selling print in the 1950s and ’60s although by the onset of the 80s had assumed more kitschy status. Roger Birchall, then working at Dartington Hall School in Totnes, Devon, was the artist. “I wanted to find a peaceful, humorous way of getting at the Tory PM”, he later recalled. “The visual metaphor for my reworking of Thatcher’s head is that, in my opinion, she was cheap, deeply flawed and anti-intellectual. To me, that was very much like a Chinese Girl print.”

Tretchikoff himself was delighted by the tribute and, pictured holding a copy in The Daily Telegraph, quoted as saying: “Tretchi is happy! The Chinese Girl was born in 1952 and she’s still going strong!”

Birchall’s original 1981 artwork has been consigned to our Out of The Ordinary sale, bringing together an eclectic mix of art, antiques, design and collectables with a wow factor. The picture, sold with a copy of the Punch issue in which it was featured, is estimated at £800-1,200.

The February 13 sale is being curated by our Kent-based specialist Mark Wilkinson who joined us in the spring after three decades working at Bonhams and Christie’s.

Out of the Ordinary - Tuesday 13 February, 10am