The Story Of A True Collector

Ahead of January's sale, collector John Barnett talk us through his collection and where it began.

In the words of John Barnett

'I have always been a collector at heart. At the age of six I used to help my Mother carry the weekly shopping home from the local corner shop. I received a couple of pence for my efforts and as soon as I had a shilling in my pocket I walked up the Edgware Road where we were living to an outdoor arcade on a bombed building site where an old man had a stall selling stamps of the world. He encouraged my interest by giving me an empty album in which to keep my purchases. The year was 1949 and I was already hooked.

Over the years my tastes widened and I started looking at many different collecting areas. These included coins and cigarette cards. Once my education was finished and I found myself working for a living I soon realised that I could supplement my wages by buying and selling antiques. By my middle 30's, married with two young children and with a home full of objects I yearned for a change in lifestyle. We left London and moved to Paris where I bought an old house within travelling distance of the big city. I met an American man ten years younger than myself and together we opened an antiques gallery on the left bank of Paris in the Rue de Lille. The gallery was called Barnett et Meyer.

In 1995 I returned to live in the U.K. and it was in the following year that I met at a country auction Ron Wilkinson who was the then chairman of ISASC (The International Society of Antique Scale collectors). Over a cup of tea he encouraged me to study the history of scales which went back in time to before the Ancient Greeks. The next day I went into a second hand bookshop and bought a couple of books on scales and the weighing of gold and silver coinage. The variety of scales available to collect from around the world fascinated me and I joined ISASC and attended their bi-annual gatherings where I met a wonderful group of like-minded people some of whom had spent a lifetime in the industry working as Weights and Measures Inspectors. 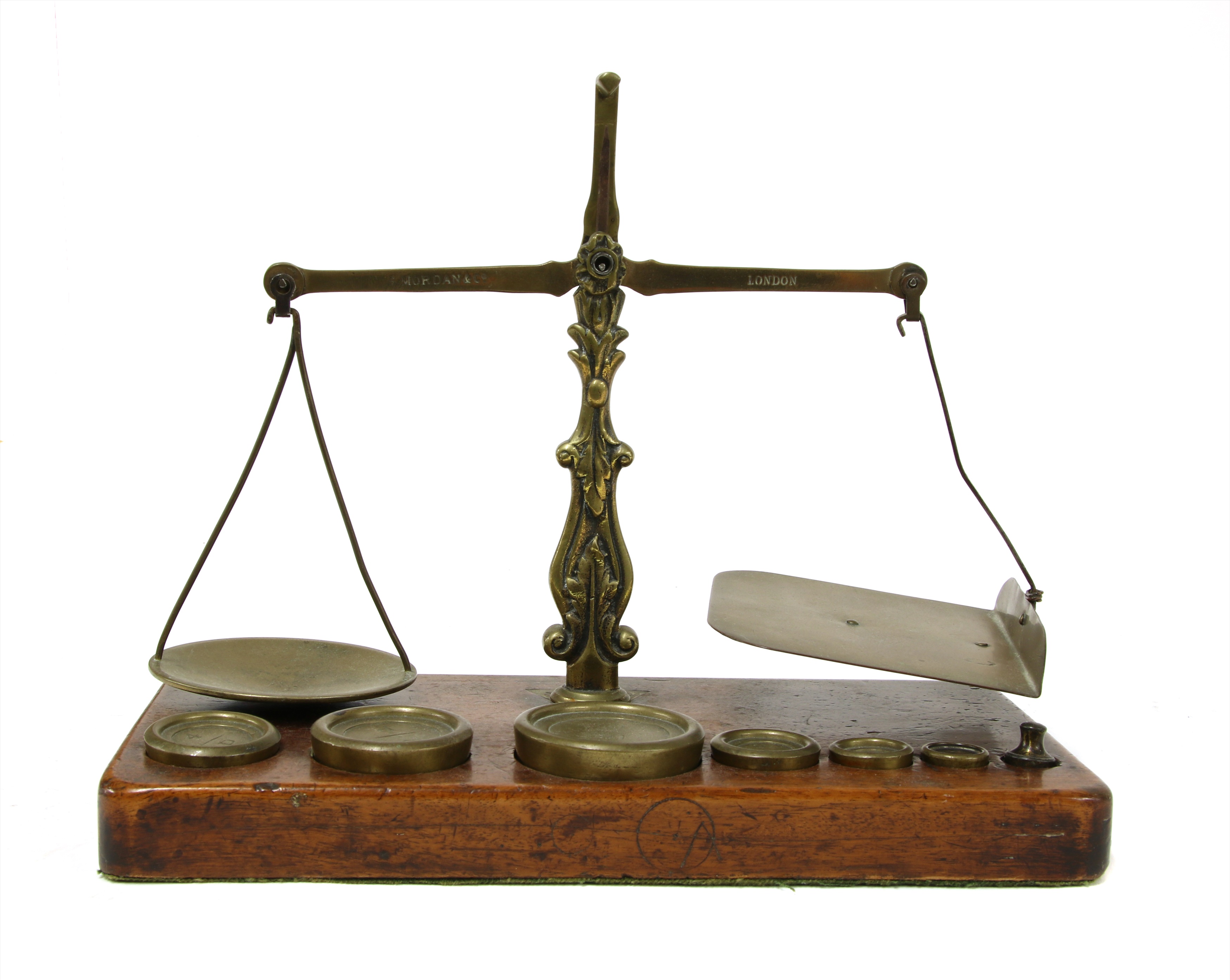 Over the years I built up a collection of scales which I attempted to limit to around 300 and by swapping and selling I tried to improve my collection to include many different styles and forms from the major industrialised countries. I always searched for the rarest types that were available. My personal favourites are those which were produced in England during the period of the industrial revolution from the early 1800's onwards when skilled craftsmen were experimenting in all areas of production and when fraudsters were trying to deceive merchants by doctoring gold coins which were readily used for transactions in, for example, the cotton trade which relied on large sums of gold changing hands. Over the years I found many rare and exciting examples which I have always treasured and which I am now offering to fellow enthusiasts including Dutch, German and Italian boxed scales from the 16th century onwards.

If I felt tempted to keep just one of the scales I am offering for sale it would be the miniature silver steelyard of extreme rarity stored in its original ray skin container by John Joseph Merlin for weighing the Guinea, the half and the quarter and dating to between 1775 & 1780. Merlin was a highly talented engineer and inventor from Liege in Belgium who, feeling unappreciated in his native country, came to live in London. He was quickly taken up by High Society and was even introduced to King George 3rd. Such was his standing that he was even painted by Gainsborough in 1781 and in this portrait he is seen holding his beloved silver scale. He made a few examples in brass - one can be seen in the Science Museum collection - but of the four known surviving examples in silver all are held in private collections. I do feel that my example would fit very well in a National Museum.

Now I feel it is time to offer my collection to fellow younger enthusiasts and hopefully it will encourage new collectors to come into the field and to enjoy the variety and brilliance of some of the innovative scales which were introduced over the centuries.'

The John Barnett Collection of Scales will be sold by Sworders fine art auctioneers in Stansted Mountfitchet on Wednesday January 8.