Nestled in a rural idyll of rolling woodland, there is a studio that belonged to Robert Johnson Washington (1913-1997), where the artist and potter lived and worked.  Walking into the studio today, it's almost as if he had just walked out the door, and pots, tools and the detritus of activity is everywhere...

Sworders were approached this summer, under the instruction of the Washington Foundation, to sell works from Robert (and also his father, William).  Our first visit was like walking into a labyrinth of his life’s work - unfinished pots, test glaze pieces stuck to the walls, brushes and paint loosely tossed into jars, found objects and cut-out pictures pinned to the walls - it was daunting and awe-inspiring at the same time.

Robert (Bob) was born in South-East London and, proving to be a promising artist, like his father, he joined Goldsmiths' College in 1930 to study painting before moving on to the Royal College of Art. After three years in the painting school, he moved to the pottery department which was headed by William Staite Murray (1881-1962), one of the leading studio potters in Britain, who influenced Robert in his belief in pottery as fine art. Bob continued to promote this all his working life. He was also taught the practical aspects of pottery and glazing by Dora Billington (1890-1968), at the Central School of Art and Crafts, who had come from a family of potters and had worked within the pottery industry.

In 1939, Robert married Marjorie Terry, then a highly successful textile designer, and it was also that year that he went to teach at Derby School of Art. This, however, was interrupted by his war service when he became an instructor to the builders of aircraft, a task which called on his understanding of modern engineering, as well as his ability to pass on information with clarity and imagination.

After the war, he resumed teaching ceramics at Derby, then Margate Schools of Art. He also maintained his own studio, producing pots under the clear influence of Murray, but with his own idiosyncratic interpretation of the figure.

In 1949, he was appointed Her Majesty’s Art Inspector for Essex and supporting teachers, building up art and pottery departments, and developing education schemes, took much of his creative drive and few pots were made.

It was Robert's retirement in 1979 that brought fresh opportunities and a renaissance in his work with clay. He was ever alert to new developments within ceramics. At this time, he was best known for his impressive tall, thrown bottle forms with a strong anthropomorphic element, an impression heightened by his use of spiky painted decoration depicting religious or mythical figures which seemed to be engaging with the pot, giving the work the added edge of surrealism. Despite his continuing doubts about his skills as a draughtsman, these pieces - monumental and commanding - remain some of his most effective forms. 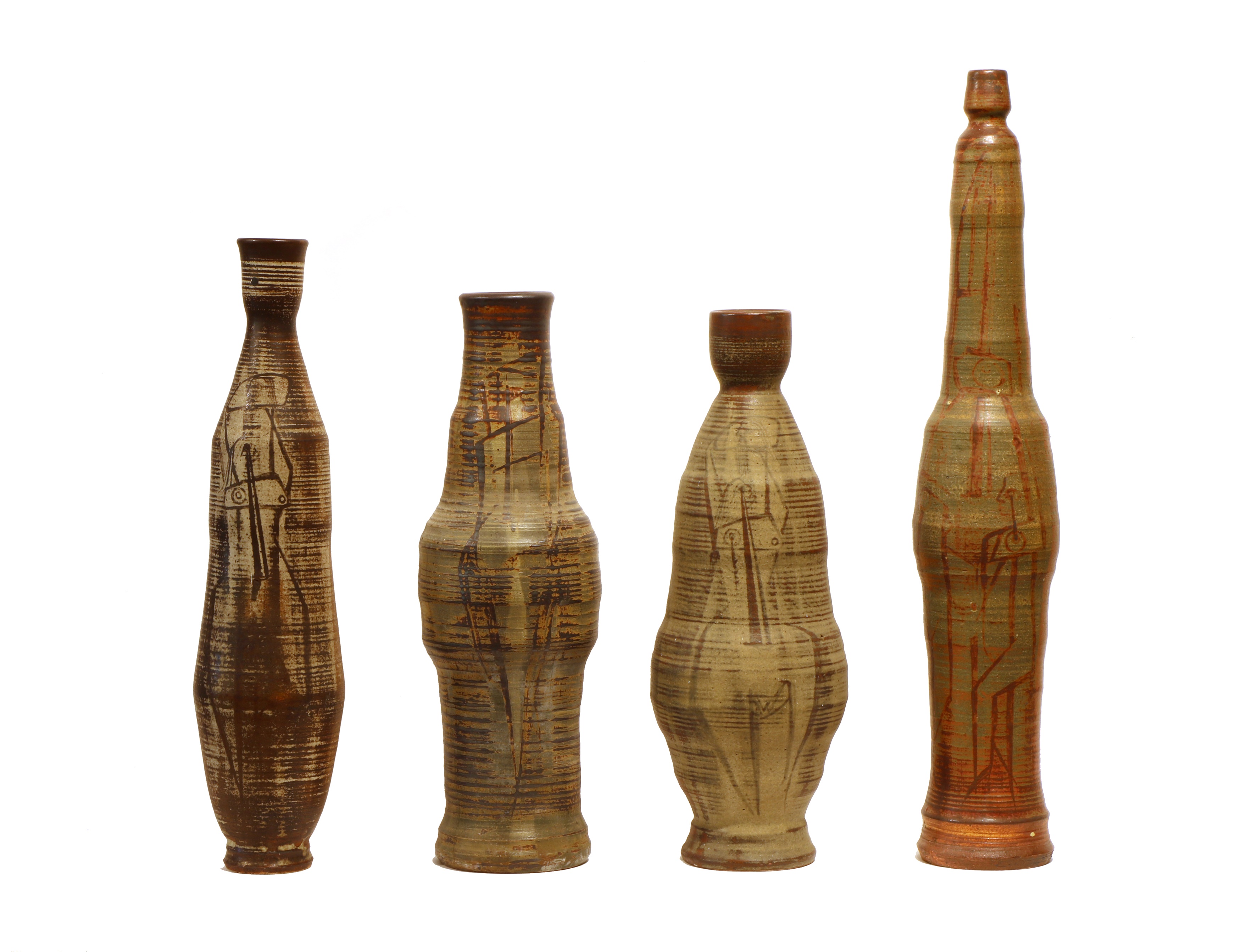 Contact was re-established with galleries and, in a solo exhibition at Anatol Orient Gallery in London in 1988, he made a comeback with a series of new work consisting of large platters, which were inventive in both their imagery and surface treatment.  Work was also shown at Paul Rice, London.

A new relationship with a young ceramic student, Su Lupasco, stimulated his experimental approach to clay, leading him to investigate cratered and textured glazes and to integrate such effects into his ceramics.

One of Washington's major contributions to ceramics was to continue the fight for its recognition as fine art and it would have been interesting to see how he would have developed his talents had he devoted his life to ceramics.  With a great deal of enthusiasm, creativity, and imagination side-tracked into education, much of his work has often been seen as over- influenced by Murray.

This similarity is superficial, for Washington's forms are imbued with their own powerful personality, which is both sculpturally aware and assertive of the character of their maker.

Do watch a fascinating film 'Out of the Tub' that gives a rare insight into Bob’s working techniques and includes archive footage as well as interviews.