The Trevor Barton Collection of Pipes

Sworders are to disperse one of the world’s finest collections of pipes and smoking accoutrements across a number of sales this year. The Trevor Barton (1920-2008) collection represents more than 50 years of acquisition and study...

Sworders are to disperse one of the world’s finest collections of pipes and smoking accoutrements across a number of sales this year. The Trevor Barton (1920-2008) collection represents more than 50 years of acquisition and study, by a Hertfordshire pipe collector known to many in the antiques trade as ‘The Pipe Man’. 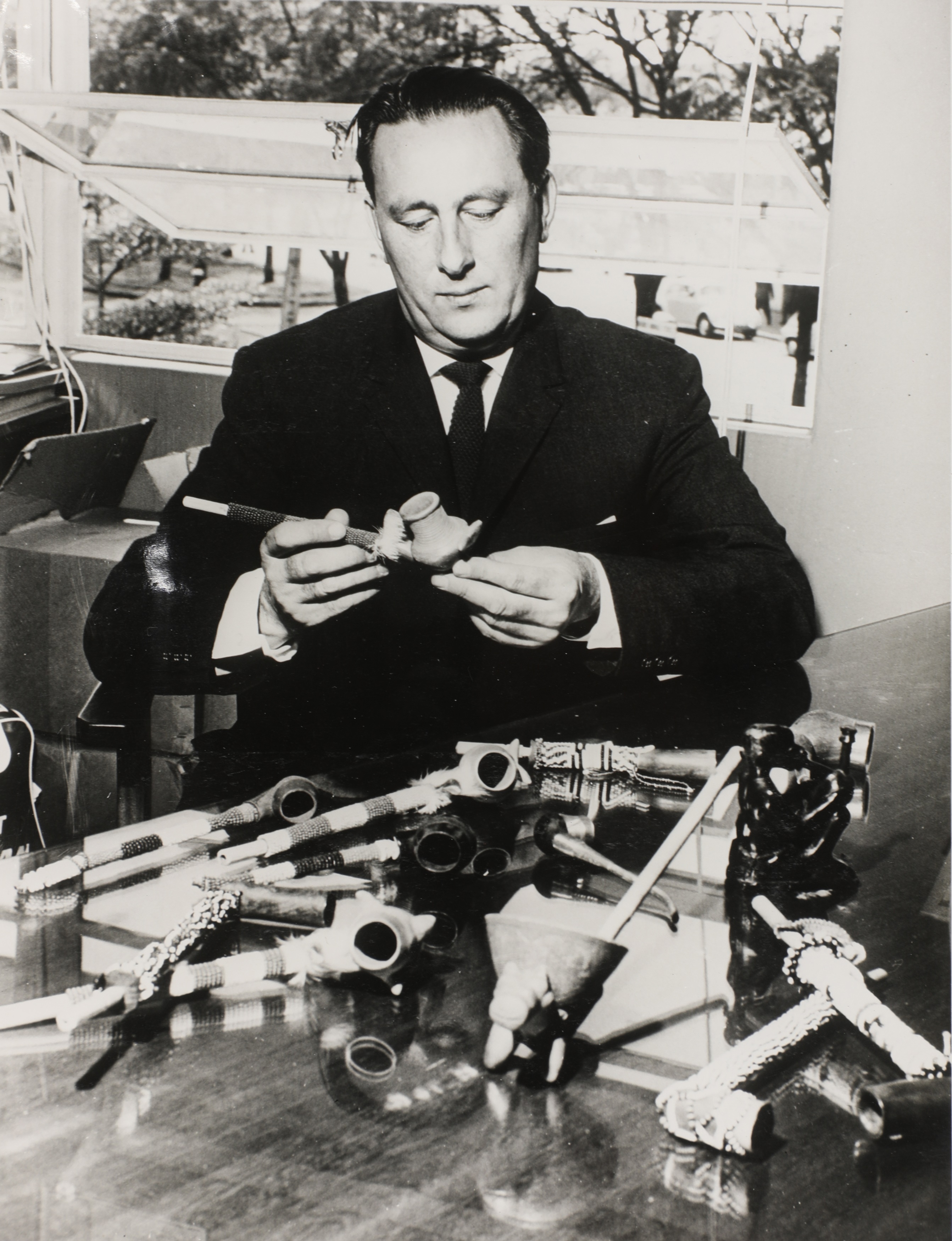 Mr. Barton began collecting pipes and other tobacco-related items in 1947, shortly after he was demobbed. He son (also Trevor) recalls life in a small Tudor cottage in Hertfordshire surrounded by hundreds of pipes and regular visits from other enthusiasts, including fellow members of the Academie Internationale de la Pipe (the collecting association formed in 1984). "Dad was a true collector. One day he bought an antique pipe on a London street market. Within a few weeks he had ten, then 20. The collection then just kept growing for the next 50 years.” His father would unfailingly rise before dawn every Friday to attend Bermondsey market and then Portobello on Saturdays - the stallholders all familiar with ‘The Pipe Man.’

Tobacco smoking was part of religious rituals in Central America for a millennium before Spanish settlers first brought it to Europe. Mr Barton’s particular interest was tribal and ethnographic items from all corners of the world - including North America, Africa and the Far East. He travelled widely during a sales and marketing career which helped him to grow his collection. 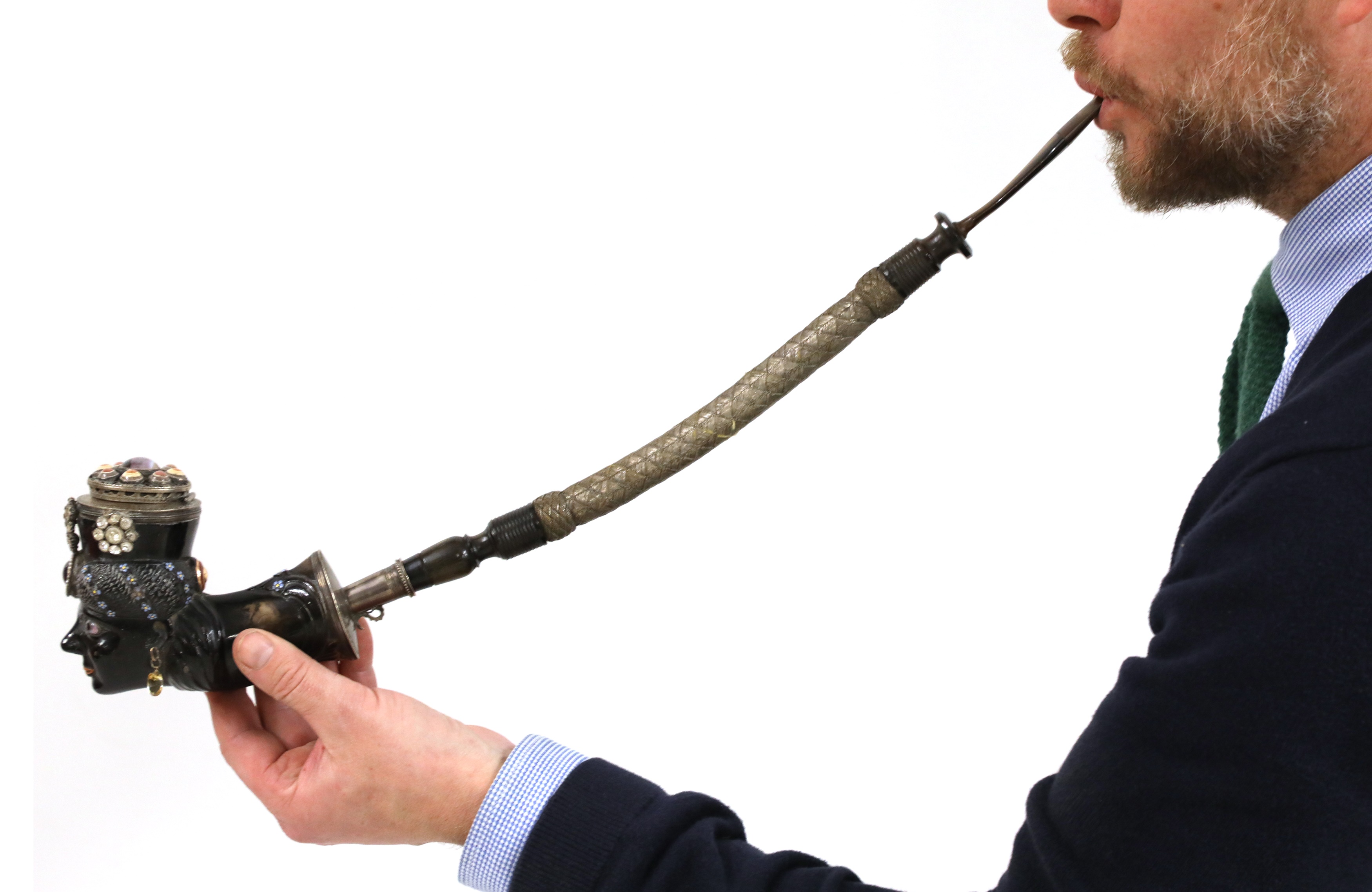 His hero was William Bragge, a 19th century master cutler from Sheffield, who amassed a collection of over 7000 pipes and accessories that were dispersed in the 1880s (many went to the British Museum). After a chance meeting with Bragge’s grand-daughter, Mr Barton bought some of his notebooks and drawings and in 1991 published the hardback catalogue A Portfolio of William Bragge and his Pipes of all Peoples. It is itself a collector’s item today, and copies are included in the sale.

Sir Walter Raleigh is credited with bringing tobacco to England. Queen Elizabeth was promptly sick after her first smoke and James I called the habit ‘loathsome to the eye, harmful to the brain and dangerous for the lungs’.

However, any efforts to stop the vogue for tobacco failed miserably.

The collection includes many English pipes and tobacco-related items from the Georgian and Victorian centuries made in a wide variety of materials: metal, wood and pottery and the hydrous silicate of magnesium (better known as meerschaum) that took European pipe-making to its zenith in the 19th century. Meerschaum pipes could be easily carved into elaborate designs, some of them serious, some of them downright racy.

Selected items from the Barton collection were sold at Christie’s in 2010, but the remainder were kept by the family. Part I of the collection formed part of Sworders’ Fine Interiors auction on September 22-23. Part II will be sold within Sworders Homes & Interiors auction (14 October) and Part III (Chinese and Japanese pipes) will form part of Sworders’ Asian Art auction on November 6.

Highlights include an early 18th century Japanese lacquer double clay pipe case, similar to another in the Rijksmuseum Collection, Amsterdam (estimate £1,500-2,000) and a mammoth ivory pipe made by the Samoyed people of East Siberia, that was chosen as the illustration on the spine of Alfred Dunhill’s The Pipe Book - this is included in the lot (estimate £2,000-3,000). A Prattware coiled pipe, elaborately coiled and painted in ochre and blue dashes c. 1820 is expected to bring £400-600.

If you would like to be notified when the catalogues including pipes go live please click here.