An exploration of the work of the British furniture maker, Robert Thompson and the prolific painter, Terence Cuneo. One wouldn’t immediately imagine a connection between a Yorkshire furniture maker and a great railway artist. Here, we take a closer look at the motif that connects their artistry.

The first, Robert Thompson of Kilburn in Yorkshire became known as the ‘Mouseman’ due to his signature of a carved mouse on the oak furniture he became famous for making. "The origin of the mouse as my mark was almost in the way of being an accident. I and another carver were carving a huge cornice for a screen and he happened to say something about being as poor as a church mouse. I said I’ll carve a mouse here and did so, then it struck me, what a lovely trademark".

An oak ashtray shows the carved mouse with a long tail

Thompson was part of the 1920s revival of craftsmanship that had been inspired by the Arts and Crafts movement in the late 19th century. The movement was reacting to the perceived excesses of Victorian mass production, machine work and uniform design. It expounded a return to making items by hand and the satisfaction achieved in so doing. His furniture is highly sought after and the firm still holds a prominent position within the industry today.

Sworders have been fortunate enough to sell numerous items by Thompson over the years.

Provenance: The Horlicks Collection
Sold for £35,000

Provenance: The Horlicks Collection
Sold for £3,000

The second, Terence Cuneo. To call Cuneo a ‘railway artist’ is misleading, as his wonderful paintings of locomotives in full steam were only a part of his prolific output. Other subjects included animals, aviation, ceremonial, equestrian, industrial, military, motor sport, philatelic and portraits. His most notable include portraits of the Queen and Field Marshall Montgomery.
He could also be referred to as a ‘mouseman’! He usually included a small mouse in some obscure corner of most of his paintings. This has become regarded as not only a ‘trademark’ or second ‘signature’ but also instills an instant desire to seek out the mouse, as one stands in front of any of his paintings. 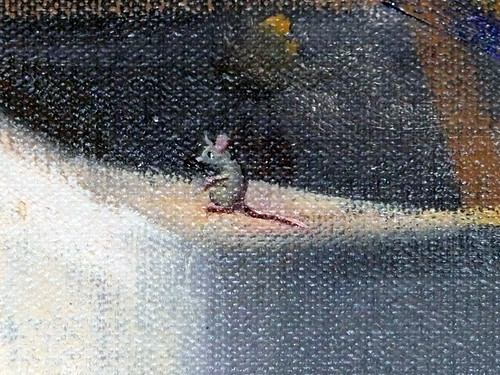 A tiny mouse sitting on a locomotive

The mouse theme permeated his work with images such as his famous ‘Stilton Junction’, Great Gnawing Railway, (after ‘The Railway Station’ by William Frith) which is entirely populated by mice. His many anthropomorphic images of mice include ‘Isambard Kingdom’….The Gambler’…. and the wonderfully named ‘Colonel Sir Thomas Cerise-Blue Vinney O.G.M at the charge of Catnip Valley, 1854’… ‘Brigadier Sir Terence Vole-Souris Hero of 'The Traps' and Commander-in-Chief, 43rd Rodent Light Stoat.

Recently Sworders sold probably one of his best locomotive paintings for £65,000. It is illustrated below, but underneath is an associated story that has intrigued and amused all who have come across it!

'EVENING STAR' or, the mouse that nearly caused an international incident. Here is the story, and it’s a true one.'
In the artist’s own words:
When this painting was reproduced as an art print by the firm of James Howarth, a copy was purchased by an Officer on a Union Castle liner and was hanging in his cabin when the liner docked at Cape Town. The Captain of the ship happened to bring a friend of his, a member of a famous Cavalry Regiment, to this man’s cabin for some reason or other. The soldier immediately noticed the print on the wall.

‘That’s one of Cuneo’s, isn’t it?’ he asked. ‘You know, the feller who always paints a mouse in his pictures’. The other two regarded the soldier with some surprise. Neither of them had ever heard of me, nor had they any knowledge of rodents being inserted into oil paintings. Three able bodied men then approached the print and searched it thoroughly. Not one of them could find the mouse!

Finally the Captain said, ‘Look here, get a cable off to this chap Haworth and tell him for God’s sake to let us know where the bloody thing is!’ John Haworth senior duly received this graphic request. He thought for a while and then decided that ‘Up telegraph pole first right’, constituted both a clear and inexpensive reply. He promptly dispatched this message back to the liner.

It arrived in Cape Town, but instead of being delivered to the ship, it was sent direct to the South African equivalent of MI5, as a highly suspicious message, probably in code. Whereupon, two members of the Security Force stomped up the gangway of the British ship and demanded to see the Captain. That good man was in his cabin sitting at his desk. The cable was thrust before him. Would you kindly explain this, Sir’. The Captain took the paper. He goggled at it. He had long forgotten the incident and words meant nothing to him. ‘Up telegraph pole first right’. What in hell did that mean? He hadn’t a notion. The Captain rose up, his face reddening in anger, when suddenly he caught sight of the word Haworth and he remembered. ‘Gentlemen’, he announced with great solemnity, ‘Follow me’. He led his visitors down through the ship and finally stopped at his officer’s cabin. He flung wide the door and with the air of a conjuror producing a rabbit from a hat, pointed dramatically at the print. ‘There you are, gentlemen – Up telegraph pole first right – and THERE’S THE MOUSE!’