Wanted: Your Bids For Wartime Propaganda

Wanted! For Murder. This American propaganda poster from 1944 sends a shocking message to the idle wartime gossip.

Wanted! For Murder. This American propaganda poster from 1944 sends a shocking message to the idle wartime gossip. It forms part of our inaugural Out Of The Ordinary sale which takes place on Tuesday 13 February 2018. 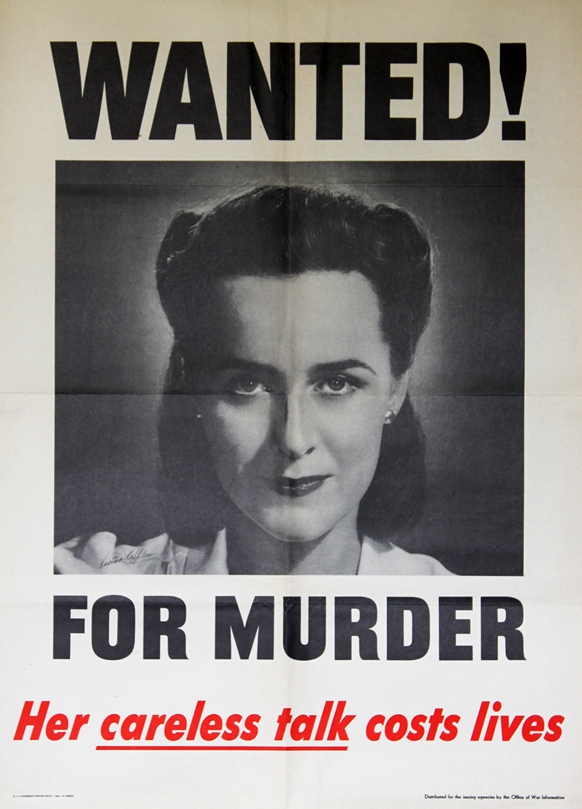 The so-called Careless Talk series had originated four years earlier in Great Britain with the well-known series of humorous but effective posters designed by Cyril Bird under the pen name Fougasse. In the UK at least, the campaign was relatively short-lived, shelved after the Ministry of Information concluded the real threat to intelligence leaks came from servicemen whose lips were loosened in the company of the opposite sex.

However across the Atlantic the Office of War Information continued to remind those on the Home Front to guard against what was said and discussed in public.

After June 1942, the OWI controlled the design and distribution of all war information to the American public in the form of posters, photographs, radio shows, and films and commissioned work from many leading artists of the period. The commercial photographer Victor Keppler (1904-87), was the creator of this work that uses the uncompromising language of a Wild West broadside.

The poster, estimated at £300-500, forms part of the Out Of The Ordinary themed sale that brings together an eclectic mix of art, antiques, design and collectables with a wow factor.

The sale is being curated by our Kent-based specialist Mark Wilkinson who joined us in April after three decades working at Bonhams and Christie’s.