Warhol, Banksy, and Kusama lead the way in Prints sale

Warhol topped the sale of more than 400 lots at £13,000, paid for Tomato-Beef Noodle O's, From Campbell's Soup II, a Factory Additions colour screenprint from 1969, signed in ball-point pen and from the edition of 250.

He also took the second highest price, £9,600, for Space Fruits (Canteloupes I), a Grippi/Zivian Inc New York colour screenprint from 1979, signed and numbered from the edition of 150, with a copyright ink stamp to the reverse.

Banksy accounted for several of the top-selling lots, including Pulp Fiction, a 2004 colour screenprint depicting John Travolta and Samuel L Jackson as gangsters wielding bananas rather than guns, and Turf War, a colour screenprint from 2003 from an edition of 750.

Pulp Fiction, a 2004 colour screenprint from an edition of 600, is one of the artist’s most iconic images and sold for £9,000, while Turf War depicts the head of Winston Churchill adorned by a green ‘Mohican’ hairstyle, an image inspired by the similar treatment of the wartime prime minister’s Parliament Square statue at the hands of protestors in May 2000. It sold for £6300.

Yayoi Kusama, who established a world record price for a living female artist at $5.1 million in 2008 with her 1959 oil on canvas No 2, remains a global Contemporary art icon. Here Tulipe (I) (Kusama 290), a signed, titled and dated colour screenprint from 2000, provided the cover image for the catalogue. From an edition of 60, it sold for £9,100. 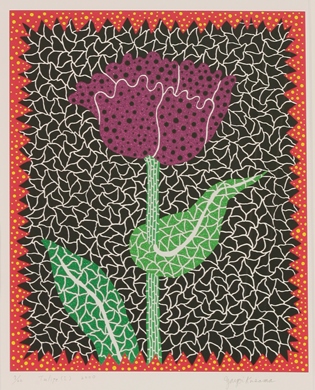 Damien Hirst contributed three works to the leading lots, the best selling being Dark Black Utopia, an inkjet print with glaze and foil bloc printed in colours from an edition of 55 in 2012. Illustrating a display of pills along the lines of his Pharmacy cabinet, the print took £5500.

Various artists contributed to The Penwith Portfolio, a collection of 12 lithographs and screenprints in colours dating to 1973 published by the Penwith Galleries in St Ives. It is extremely rare to find these works in a single portfolio. Those featured include Robert Adams, Alan Davie, Merlyn Evans, Duncan Grant, Barbara Hepworth, Peter Lanyon, Bernard leach, FE McWilliam, Henry Moore, Ben Nicholson, John Piper and Michael Rothenstein, a veritable rollcall of giants in Modern British art. Printed at the Curwen Studio in London, these are Hors de Commerce impressions aside from the limited edition print run, with each inscribed HC XII/XII and signed in pencil by the artist, except in Lanyon’s case, with his work signed by his widow. The hammer price was £8,600.

Another collection made up of various artists and offered as a single lot was a series of seven Lyons lithographs dating from 1944 to the 1950s. Printed by Chromoworks Ltd of London, they feature LS Lowry, John Piper, John Nash, Barnett Freedman, Edward Ardizzone, John Lake and Clifford Frith and sold together for £3,200.

“This sale was particularly diverse and catered for all tastes and budgets,” said Sworders specialist Shane Xu. “I was delighted that it was so well received. Modern and Contemporary prints are proving to be a great way to engage new audiences in art collecting as they are so accessible.”