It is often suggested that the most notable creations of the 'cameo revival' were achieved during the Art Nouveau period by the Nancy makers Gallé and Daum. However, Sworders Chairman, Guy Schooling, disagrees.

It is often suggested that, artistically, the most notable creations of the ‘cameo revival’ were achieved during the Art Nouveau period by the Nancy makers Gallé and Daum. However, Sworders' chairman Guy Schooling is not alone in his belief that, in terms of sheer quality, the earlier work of the Stourbridge glassworks was seldom matched.

Although once dubbed the ‘crystal king of England’ the Thomas Webb & Sons glassworks is perhaps best remembered for its cameo glass. As interest in classical Greek and Roman glassworking methods surged, the ancient process of etching and carving through layers of opaque white and coloured glass was studied, revived and then perfected by a number of Midlands makers in the mid Victorian period. Webb, based at the Dennis glassworks, won prizes for their products at the 1889 Paris Exposition. 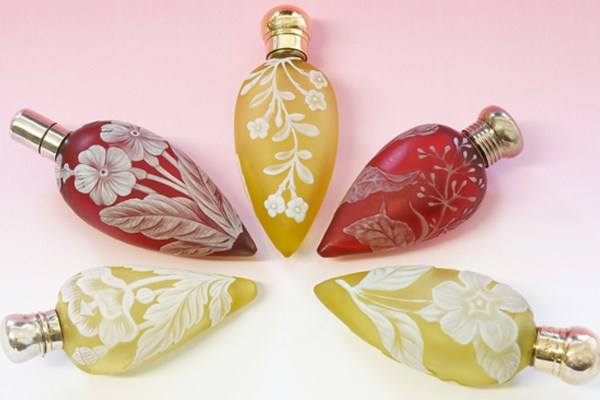 This collection was formed by the late Ann Marsden Comery, nee Barraclough (1934-2017), the daughter of Indian mining engineer Lancelot John Barraclough who latterly lived on Alderney in the Channel Islands. When Guy Schooling visited the Cambridgeshire home of her family, he had been taken aback by the magnitude and quality of the inherited collection, which included almost 150 scent and cologne bottles.

The ‘cameo’ bottles, seven in total, carry estimates of £400-600 each. A layer of milky white glass has been cut away - via acid-etching and hand carving on a wheel - to give a design of blossoms on a branch or a leafy floral bloom. Occasionally a 'patina' stain is applied to further enhance the design. Only a small handful of Webb pieces were signed but, as most of these bottles were fitted with screw-top silver mounts by Birmingham makers such as ‘smallwork’ specialist Sampson and Mordan, they can be dated with some accuracy to the mid to late 1880s.