A collection of autographed letters written by royalty, politicians and notable public figures, largely addressed to the Headmaster of St George’s School in Ascot, Berkshire, where Winston Churchill was a student, are to be sold at auction by Sworders Fine Art Auctioneers in Essex this September.

St George’s was founded as a boys prep school in 1877 by The Reverend Herbert William Sneyd-Kynnersley. The son of a Birmingham magistrate, Sneyd-Kynnersley had a merciless attitude towards the boys in his charge and was renowned for his severe floggings. Churchill began boarding at the school in 1882 at the age of just seven years old.

Included in the album of letters is a written communication between Prime Minister William Ewart Gladstone and the Principal, dated September 1883. Gladstone wrote to ask a favour of Sneyd-Kynnersley - a request for him to grant time off for one of his pupils – the son of Arthur Hamilton-Gordon, a British Liberal Party politician and colonial administrator whom was accompanying Gladstone on one of his expeditions. Hamilton-Gordon was desperate to spend quality time with his son before moving to Ceylon (now Sri Lanka) where he would be Governor until 1890. The letter stamped ‘10 Downing Street, Whitehall’ reads “I venture to ask a favour of you…I should be much obliged if you will give the boy an extra week’s holiday”. Sneyd-Kynnersley wasted no time is compiling his response “I am sorry that I cannot accede to your request…I cannot do otherwise than decline to grant the indulgence for which you ask”.

Also included for sale – a signed letter from Florence Nightingale, written in 1878, addressed to Scottish Liberal Party politician George Campbell. The letter reads “Dear Sir George Campbell, Col. Fife has written to me, without giving me his address in London. Might I take the very great liberty of asking you to give him the enclosed, when he appears before you to give evidence on Thursday? (tomorrow). I leave it open to you that you may see there is no treason. I am not going, like Dalila, to cut off his hair or to suborn his evidence”. The letter is and estimated at £300-500. 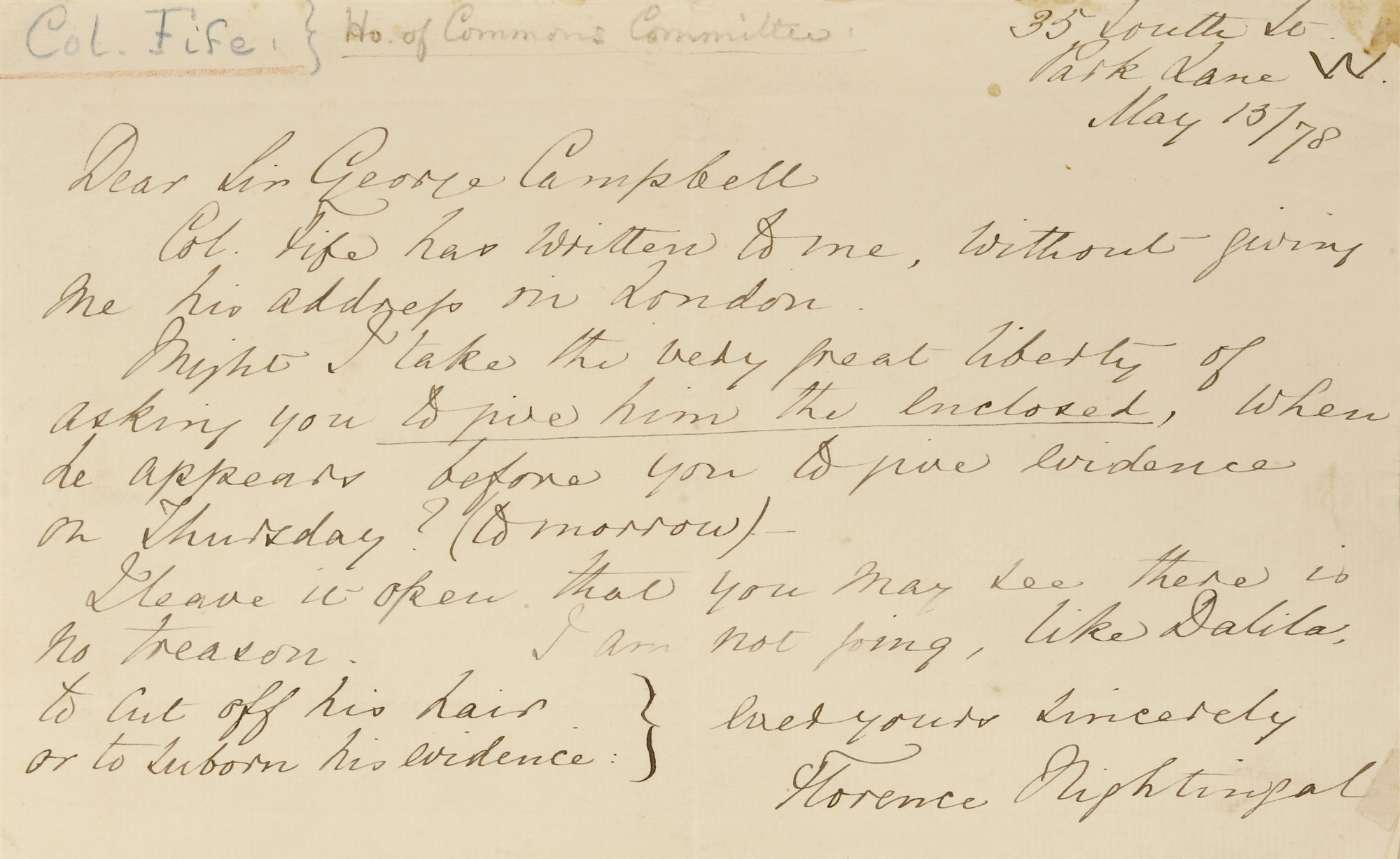 A signed letter from Florence Nightingale, written in 1878, addressed to Scottish Liberal Party politician George Campbell. Estimated at £300-500 for the September 11 auction

Other highlights in the Books and Manuscripts  section of the September 11 auction include nine works by Herbert George Wells, all signed by the author. The well-thumbed 1920s first editions were gifts to Edward and Muriel Davies with whom HG Wells (1866-1946) and his wife Catherine, later known as Jane (1895-1927), were friends. During the 1920s, Muriel would often fly from Croydon airport to Paris where she would meet Jane for shopping trips.  HG Wells continued to send books to the Davies family after Jane’s death in 1927, occasionally adding an affectionate personal inscription. The tongue-in-cheek note to a copy of The Way the World is Going (1929) - the compilation of articles in which that Wells gloomily predicted the collapse of the League of Nations and the prospect of a second world war - reads “For Muriel Davies to cheer her up on a wet day, H.G.W, Nov”.

The nine books, a mix of both fictional novels and non-fiction subjects penned some decades after the classic science fiction novels that made Wells’ name, are together estimated at £1000-1500. 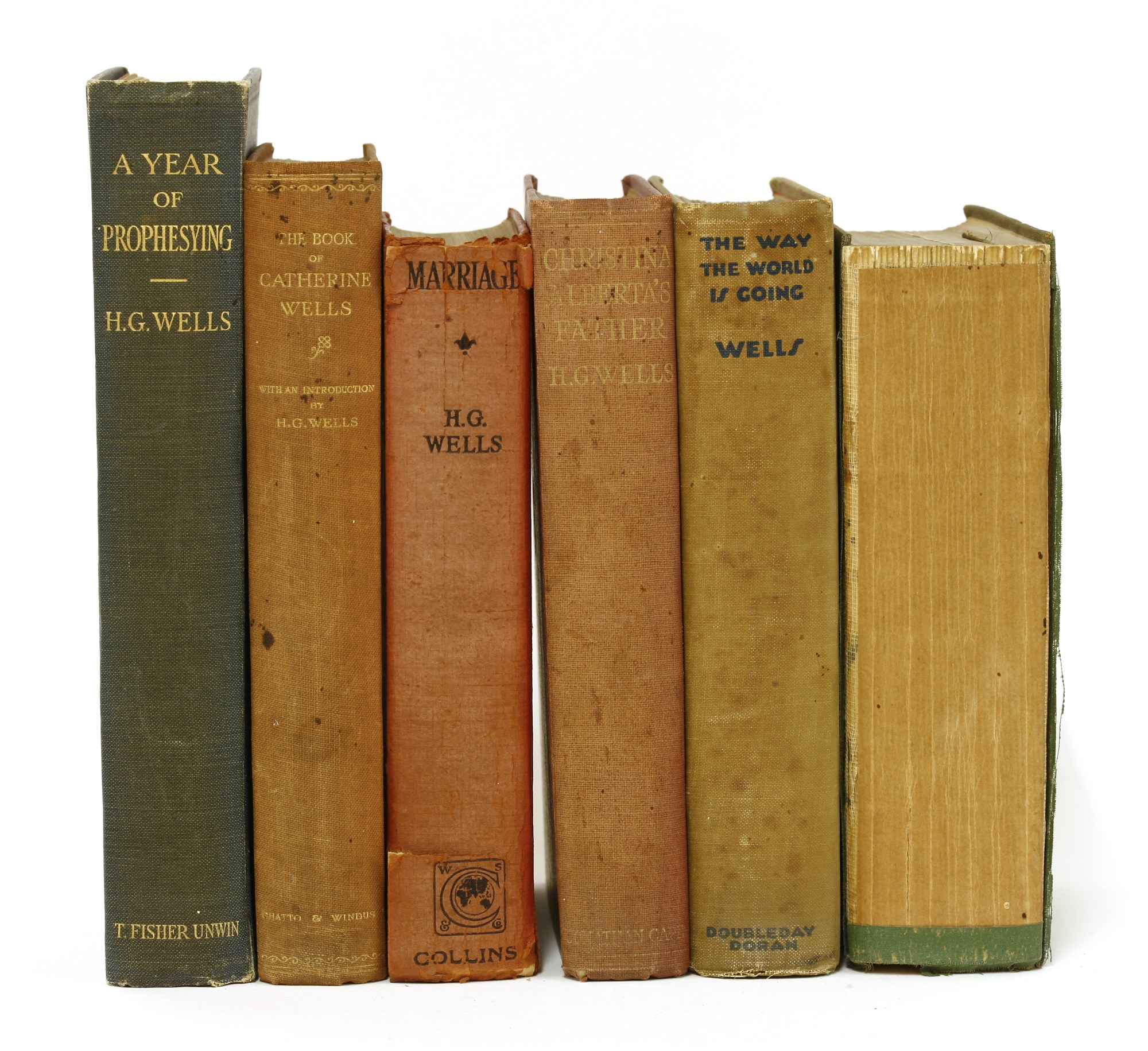 The sale is open for viewing at Sworders’ Stansted Mountfitchet salerooms from 9am on Friday 7 September.