The group comprised: The Military Cross, inscribed 1945, The 1939-1945 Star, The Africa Star, The Italy Star, The France and Germany Star, The Defence Medal, The War Medal, together with a George VI Territorial Medal, awarded to 2929348 SJT D J BRUCE, Liverpool Scottish (Territorial).
Captain Hoyer-Millar was second-in-command of B Company, and was seen as one of the old hands. He had fought in North Africa and Italy, and had been the battalion's Intelligence Officer. He was awarded the Military Cross for his deeds at Arnhem Bridge. 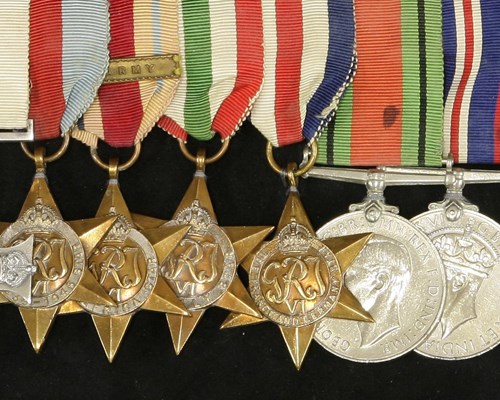 His citation in the London Gazette on 18 September 1945 reads:

'Captain Hoyer-Millar with two sections of B Company was ordered to hold a vital position astride the North end of the bridge at Arnhem, soon after dark on D+1. As he moved into the position he was met by entirely unexpected automatic fire from a much stronger enemy force who had infiltrated under cover of dark. Without the slightest hesitation Captain Hoyer-Millar went straight into the attack and by the speed and ferocity of his assault killed ten and drove off the remainder. Later in the night he drove off a strong enemy counter attack from the South.

On the morning of the fourth day Captain Hoyer-Millar took over command of B Company, when the Company Commander was wounded, at a very critical stage of the battle when his Company was being attacked and half his position had been set on fire. He displayed great courage continuously exposing himself to enemy fire, and so organised his defences that the enemy attack was repulsed. Later the whole of his position was set on fire but he continued to hold the area until ordered to withdraw. He then successfully evacuated the remnants of his company, himself remaining to the last.

The medals were offered alongside a caricature of Hoyer-Millar, in a kilt and firing a Tommy gun from the hip and a series of five woodblock prints.