We have sold a variety of William de Morgan items in the last ten years – the highlight being a large charger from  the 'Sunset and Moonlight Suite' of a galleon being attacked by a sea monster, designed by Charles Passenger in c.1890 in the Fulham Period (1888-1898). We also found the design in the V & A archives and reproduced the design in the catalogue with the charger. It sold for £14,000. Also from the same estate we sold a ruby lustre charger, again designed by Charles Passenger and sold for £7,200. Our most recent success was the two-tile from the Merton Abbey Period (1882-1888) in our sale on 29th January 2019 which sold for £6,500

William de Morgan (1839-1917) went to the Royal Academy Schools in 1859 and met William Morris in 1863 and began working with Edward Burne-Jones to design and make stained glass with Morris & Co. He noticed that silver nitrate stain fired at the wrong temperature would reduce to give an iridescent sheen on the glass and he began experimenting with lustre glazes on ceramics.

He began producing ceramics in earnest in 1872 in Chelsea, he bought blank tiles and small plates to decorate with ceramic designs featuring fantastical animals, flowers and medieval motifs the factory also worked on Cheyne Row and had a salesroom at Orange House.

He moved to Merton Abbey near Wimbledon to have a larger pottery in 1882. He had 13 staff working for him at the peak of production here and so had resource and space for the first time to design the shape of the hollowware and the surface design for it, which led to ambitious vases, bottles and bowls being produced. His staff would decorate the ceramics to his exact designs and had some different methods of transfer from tracing to pouncing through drawn designs.

De Morgan won important commissions over his career, which were usually for large-scale tile schemes to decorate interiors. He assembled Lord Leighton's collection of Persian tiles in the newly built Arab Hall of his Holland Park home. Between 1882 and 1900, William was asked to design schemes and provide tiles for twelve P&O liners. 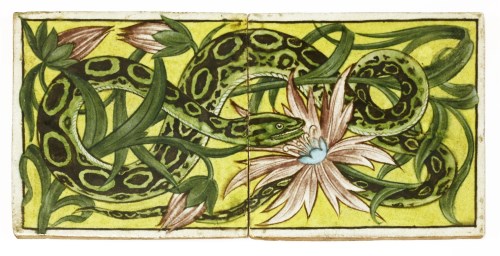