British studio pottery currently ranks among the strongest subsets of the art and antiques market.

Running parallel to the demand for Modern British painting, pieces by the most recognisable names of the movement are bringing ever higher prices. Curator interest is growing too: on Tuesday 20 March, an exhibition titled 'Things of Beauty Growing: British Studio Pottery' opens at the Fitzwilliam Museum in Cambridge.

The market is currently dominated by two giants from the immediate post-war period - Dame Lucie Rie (1902-95) and Hans Coper (1920-81) - but there is growing interest too in the creations of a second generation of living studio potters such as John Maltby (b. 1936), Jennifer Lee (b. 1956) and John Ward (b. 1938). The best pieces by these artists all have achieved record sums at auction in recent months. 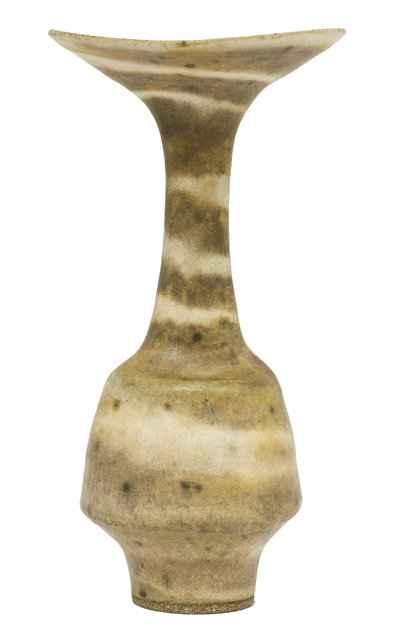 A Lucie Rie trumpet-shaped stoneware vase sold for £16,000 as part of the collection of the Hackney ceramicist Sally Dawson (1927-2017) offered in October 2017.

In 2017 Sworders enjoyed particular success selling studio pottery as part of our regular 20th Century Decorative Art and Design sales. The collection of the Hackney ceramicist Sally Dawson (1927-2017) offered last October was a good case in point. Dawson, a member of the Craft Potters' Association, had collected many works by her influences and contemporaries including members of the Leach family, Ian Godfrey (1942-1992) and Gwyn Hanssen Pigott (1935-2013) and Lucie Rie whose 37cm high trumpet-shaped stoneware vase decorated in a mushroom, ochre, mauve and green glaze sold at £16,000. 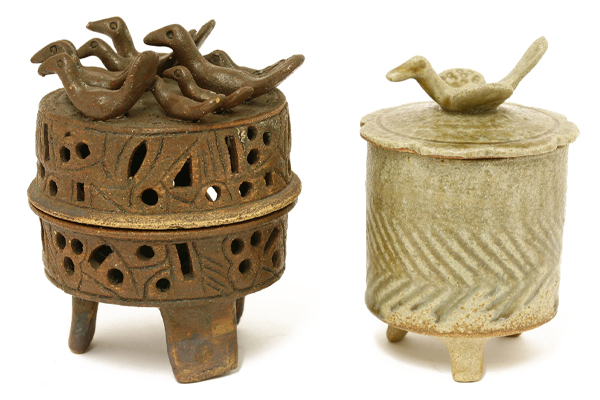 A a pierced stoneware casket and pot by Ian Godfrey sold for £600 as part of the collection of the Hackney ceramicist Sally Dawson (1927-2017) offered in October 2017.

We are currently welcoming entries of studio ceramics for our next 20th Century Decorative Art and Design auction to be held on Tuesday 20 June. Closing date - Friday 20 April. To discuss potential consignments please contact: