John James Sheridan (1881-1931) was born on Achill Island off the west coast of Co Mayo, Ireland in 1881, the son of a farmer. The house he built on Achill in preparation for his return from the Far East is still in the family.

He moved to Shanghai c.1903-04, working as a wine merchant, and there met and married Anna Dobershansky (1894-1964), the daughter of a Russian noblemen. The couple married in 1922 and enjoyed a prosperous life together with four children but John died in 1936 and, during the Second World War, Anna was incarcerated in the Lunghua Civilian Assembly Centre in Shanghai - the infamous Japanese internment camp that inspired the film ‘Empire of the Sun’.

Anna survived the camp and soon after her release, travelled to Achill together with three ornately carved hardwood trunks containing the family possessions. Aside from a few items that were dispersed among family members, the contents of the trunks have remained intact. 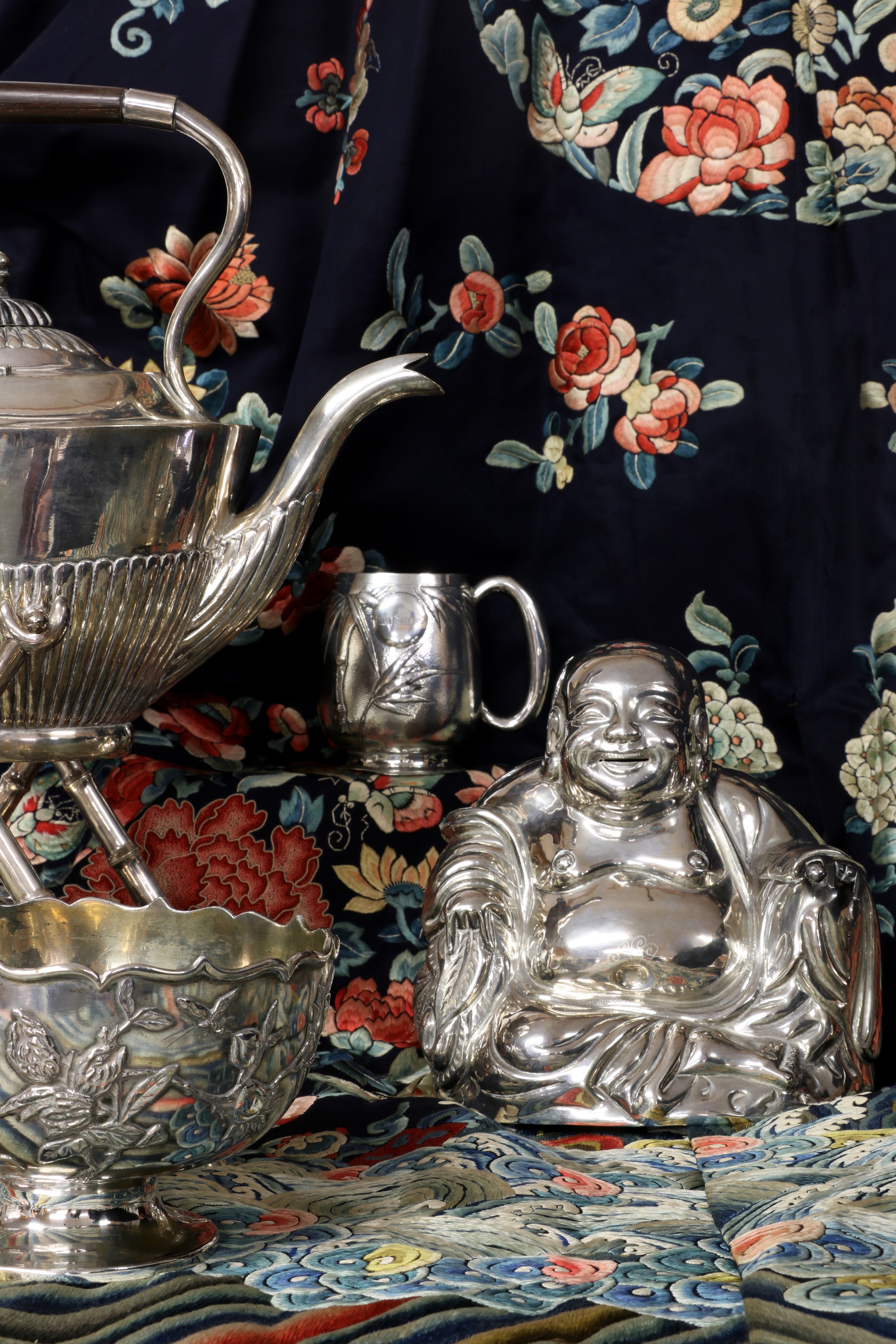 The collection of silver, 24 items in total, has been entered for sale in the November 5 Asian Art auction

From the collection of 24 items to be offered for sale in Sworders' November 5 Asian Art Auction, there are two cocktail shakers - synonymous with the life of Westerners in early 20th century Shanghai. One, embossed with Taoist dragons amidst bamboo, is marked for the silversmith Tu Mao Xing of Jinjiang in Jiangxi province. Another piece also embossed with a dragon within a circular cartouche, is marked for Zee Wo, a silver retailer located in Shanghai at 121 and 370 Henan Road. They are estimated at £400-600 each.

Also marked for Zee Wo is a half fluted kettle on a bamboo-shaped stand (estimate £600-800), while a silver statue of the rotund deity Budai marked for cartouche, one of the best makers from Tientsin (both pictured above). Based in a city that counted lots of sports clubs and institutions, the firm was renowned for its silver trophies but also made many of these fine quality solid silver models of immortals. This 15cm high silver model of Budai depicts him seated holding a precious pearl in his left hand and a sack in his right. The estimate is £800-1200.

The Fry Reopens With Great Bardfield Exhibition Sponsored by Sworders

The Fry Art Gallery in Saffron Walden, Essex, has undergone a major refurbishment and reopens with one of its first shows supported Sworders.

The East London Group of Artists

After securing a record price for John Albert Cooper's oil on canvas ‘Wharfedale After Rain’ in our auction of Modern & Contemporary Art in April of this year, we delve further into the realms of the East London Group of artists, of which Cooper was leader.